The Washington Capitals have enjoyed the best season in franchise history, dominated the NHL, won the President’s Trophy and broke all kinds of records. However, it will all count for zero if – as in past postseasons – the Capitals don’t win the big prize. Is it finally time for Caps’ fans to believe?

The Capitals have made the playoffs for all but one of their last 10 campaigns and something (usually the New York Rangers) has always impeded their progress. This year though, I can say – hand-on-heart – that things seem a little different.

Let’s take a look at a few of the many factors that made the Capitals the best team in the 2015-16 regular NHL season and why this might be their year to hoist the Stanley Cup.

The goaltender puzzle was finally solved this season in Washington. Many also-rans have stood between the pipes – and many showed extreme promise – but Braden Holtby emerged as one of the best net-minders the NHL has seen in recent memory. Yes, as good as what’s-his-name on the Rangers. There were a few fans and commentators who scolded head coach Barry Trotz for sitting out Holtby in the Caps’ final game even though the 26-year-old had a chance to break Marty Brodeur’s most wins in a season mark (49), but Trotz made the correct call by sticking to his game plan. And, it’s a testament to how much of a stand-up guy Holtby is when he graciously accepted his bench-warming turn on Sunday. It wasn’t a big deal to him; the team was much more important. The great Brodeur offered his congratulations for tying him when he surprised Holtby after the Caps game with St. Louis on Saturday:

Holtby ended the regular season with a GAA of 2.20 and a save percentage of .922. If his icy-cool demeanor stays intact, the rest is gravy for the Caps.

What can be said about the best player on earth? (Crosby fans, please keep your comments rated PG-13 or lower). Alex Ovechkin tallied 50 goals in the regular season – giving him seven NHL seasons with 50 goals or more. He can score goals with any center or right wing alongside him, and that was proven this season when Nicklas Backstrom missed the start of the season. However, some might lament that the towering Russia rarely shows up for the postseason – or at least the Caps’ opponents figure him out and keep him contained. This year is different though, and I’m basing that assumption on his supporting cast – the lines from top to fourth are the best to take the ice for the Capitals ever. Ovechkin can win the Stanley Cup single-highhandedly from the point on the power play. He’s that good, and he’s at his peak – which is when players win their first Cup, most of the time.

Ask any average NHL fan which Russian topped the Capitals’ points table this term and the likely response would be Ovechkin. Of course, that’s incorrect. Evgeny Kuznetsov rose to the top of that chart with a dazzling 77-point mark – including 20 goals and 57 assists. More importantly, he stamped his papers as an official future NHL superstar. His 2014-15 season was pretty good with 37 points over 80 games, but in 2015-16 he more than doubled that points tally over 82 games. He handles the puck sublimely, and every team he’s faced this year has had trouble taking him out of his game. Why? He’s not Ovechkin. That’s the rub – every player over the age of 29 has dealt with Ovechkin for the better part of 10 seasons; they’ve all studied him; figured out a majority of his moves. Kuznetsov has the same style of play as Ovi, and gives any NHL team facing the Capitals some major heartburn. I’m going on record to state that – when all is said and done – Kuznetsov as well as Ovechkin will steal the headlines over the next two months.

ALL the Other Players 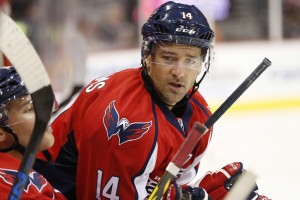 Very few young-gun teams win the Stanley Cup, and a shrewd Trotz and GM Brian MacLellan knew this, and they knew what to do. They brought in experienced, 30-somethings with some strong postseason street-cred including two who’ve won a Cup (Justin Williams and Mike Richards). Another new addition, T.J. Oshie, was second in goals for the team with 26. Add in the talented Andre Burakovsky, Marcus Johansson, Jason Chimera, and – of course – Backstrom and the forward supporting cast is complete. It doesn’t hurt that any fourth line that Trotz sends out is also formidable (see Tom Wilson). The Caps scored 252 goals in the regular season, the second most in the NHL behind the Dallas Stars. There goals against was also the second best in the NHL at 193 (behind the Anaheim Ducks) which not only highlights Holtby’s incredible season but also the skills of the blue-liners in front of him. All of that equated to the Capitals holding the best goal differential in the NHL by a country mile.

Ultimately, the Washington Capitals are staring history in the face. They have one hand on the cup already, but as every ‘Cardiac Caps’ fan knows – it’s theirs to lose.