Winless in five straight games and 3-4-3 in their last 10, the Boston Bruins are entering panic mode. Officially. For real, this time. Here’s why.

The Bruins are, to the best of our knowledge, fully healthy and putting forth a full roster save for Kevan Miller, a bottom-pairing defenseman who was injured in Tuesday night’s game against the Calgary Flames. The Bruins aren’t missing their top, shutdown defenseman anymore. The Bruins have their best, play-making center in the lineup. The Bruins even exercised the option of calling up their best forward prospect in the system.

This is it. This is the team that, going forward, should have stabilized after a shaky start to the season and regained their reputation of being one of the best teams in the Eastern Conference. But, man oh man, this is not a very good team right now.

Over the course of the season, the Bruins CEO Charlie Jacobs has expressed his disgust in the team’s play, calling the possibility of missing the postseason an “utter failure.” Then, Bruins President Cam Neely recently told The Boston Globe that he “landed on disappointed,” when thinking about the team’s season thus far. Depending on your philosophy, the breakdowns are coming at the right time. The NHL Trade Deadline is 11 days away and the Bruins are barely holding onto the Eastern Conference’s last Wild Card spot, three points and a game in-hand of the Florida Panthers. The Florida Panthers.

Let’s get the editorial part out of the way right now: I believe that Chiarelli’s job should be safe regardless of what happens the rest of the season.

Chiarelli and his “guys” got the team to seven straight postseasons, two Stanley Cup Finals, one Stanley Cup Championship, four division titles, and a President’s Trophy winning season. On an individual basis, the Bruins captured three Vezina Trophies, two Selkes, one Norris, and one Jack Adams Award under Chiarelli’s watch. Good luck getting this type of immediate success with a new GM in place. If Chiarelli were to be fired, the Bruins will get worse, even worse than they are now, before they get “better.” With Patrice Bergeron and Tuukka Rask in their primes, and plenty of potential “next big things” as supplementary pieces, that’s not something you want to do.

Chiarelli should get the benefit of the doubt of this season being an anomaly for the Bruins. Maybe this was just a bad season. Resetting the way and structure of the team after one bad year shouldn’t be the answer rather, fixing the pieces and exploring options to remedy the organization is the better option.

But if this isn’t a bad season? Sure – then it’s time to reassess Chiarelli’s position with the team. Doing it after this season is more of a step backwards than anything Chiarelli himself could do or has already done to impact the Bruins. The problem is, Chiarelli is being pressured to make a move and fix a team that hasn’t performed well because his job rides on it.

That’s where things are going to get messy.

Forget the contracts and signings for a moment. If we’re basing Chiarelli’s legacy with the Bruins on the last major trades he has made, then yeah, it’s not pretty.

On paper, back in 2013, the Tyler Seguin trade seemed a little off-balanced for the Bruins, but nowhere near where it is now. Seguin wasn’t a superstar in Boston and had similar point totals to Loui Eriksson, a two-way forward who played close to 20 minutes per game in Dallas. Throw Rich Peverley, a depth player at that point, to the Stars, and three up-and-coming prospects to the Bruins and you have a somewhat even deal on paper.

Of course, the next two seasons play themselves out with Seguin becoming an elite NHL forward with Dallas, while Eriksson and Reilly Smith are playing inconsistently in Boston. Matt Fraser was waived and claimed for nothing by the Edmonton Oilers, and Joe Morrow’s road to the NHL is being blocked by the slew of bottom-pairing defenders that occupy the Bruins’ blue line currently. Now, it’s a bad deal.

The other biggest misstep for Chiarelli was trading Johnny Boychuk to free up cap space. Chiarelli was forced to make a move to eventually (?) start to clear cap space for the Bruins to gain more flexibility. Rather than lose Boychuk for nothing at the end of the 2014-15 NHL season once he becomes a free agent, Chiarelli opted to trade him early and acquire draft picks. While the idea behind it was there, it’s tough to look back at with the Bruins’ defensive depth struggling the way it is. The departure of Boychuk makes an acquisition of a defenseman necessary at the trade deadline. A realistic scenario? The picks acquired for Boychuk are spent for a rental who leaves Boston anyway.

So, what was that all for again?

Of course, there were some great trades, too. The Dennis Seidenberg and Mark Recchi trades come to mind, as does the acquisition of Nathan Horton and Gregory Campbell. For as many blah trades as Chiarelli has made, there have been plenty of deals that have helped the team’s success. 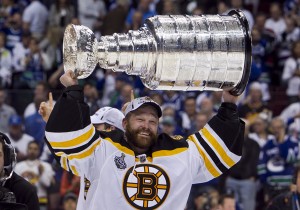 And if you wanted to play devil’s advocate for a moment, you could say that the aforementioned Vezinas had nothing to do with Chiarelli who didn’t acquire or sign Rask or Tim Thomas. Sure, but Chiarelli didn’t trade Thomas in 2010 when Rask took over the starter’s role. Thomas won a Cup and a Vezina the following season. After Thomas sat out in 2012-2013, he dealt him (again for something, rather than lose him for nothing), and had Rask take over the starter’s role. Rask got to the Cup Finals and won a Vezina the next year.

Perhaps it’s better to say that Chiarelli takes risks. Think about the high-profile players who have come and gone through Boston during his tenure. Chiarelli isn’t afraid to shake up the culture and move players around when times are tough.

The Bruins brass should zero-in on this: Chiarelli will make moves to shake things up, even if he has his “guys,” who are becoming fewer by the season. Before anyone starts playing out how Chiarelli’s time with the Bruins’ finishes, maybe it’s time to see what else he has in store.

1 thought on “How Safe is Peter Chiarelli’s Job in Boston?”