That mark has dropped their overall percentage to 82.7 percent, which is good for 10th in the league.

It’s not as if the Red Wings are taking more penalties. In December, they took 47 penalties compared to 40 in January. They did play two fewer games in January due to the All-Star break, but the averages are about the same — 3.36 penalties per game in December compared to 3.33 for January.

trick question: what is a penalty kill? #RedWings #IForget

So what’s the issue? How does one of the best penalty-killing teams allow 14 power-play goals in one month? Here are the reasons Detroit has struggled shorthanded.

During the last couple of games, the Red Wings have been chasing the puck too much. When you already are down a man, chasing the puck is the worst sin you can commit on the penalty kill, especially if you are facing a team that is good at cycling the puck.

Here’s a perfect example against the Islanders on Saturday. New York wins the offensive zone faceoff and quickly gets a shot off from the point. Brock Nelson retrieves the puck at the half-boards, as he is hounded by Luke Glendening and Jonathan Ericsson.

Two Red Wings try to cover one Islander, and Nelson is able to get the puck to Frans Nielsen, who finds a wide-open Lubomir Visnovsky, who rifles a shot past Petr Mrazek.

Glendeing took himself out of position, which put Riley Sheahan in a difficult spot. He attempted to take away the low-slot pass, which left Visnovsky all alone in the high slot.

Against Tampa Bay on Thursday, the Red Wings left one of the most prolific goal scorers in Steven Stamkos wide open. As you can see in the screenshot below, all four Red Wings are focused on the puck carrier Jonathan Drouin and are positioned inside the faceoff circle, while Stamkos waits on the other faceoff circle ready to receive a pass. 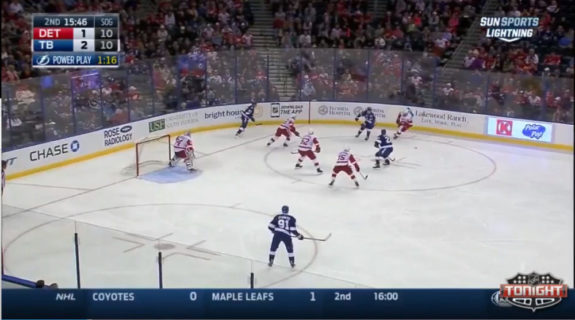 Droiun slides the puck to Anton Stralman, who finds Stamkos, who beats Mrazek with his patented hard shot.

Against Florida last Tuesday, there was more chasing being done. Sheahan got knocked down in the corner, DeKeyser goes to chase Jussi Jokinen, which forces Joakim Andersson to try to cover the two players on the point. Brian Campbell easily slides it over to Brandon Pirri, who has all day to shoot on Mrazek. 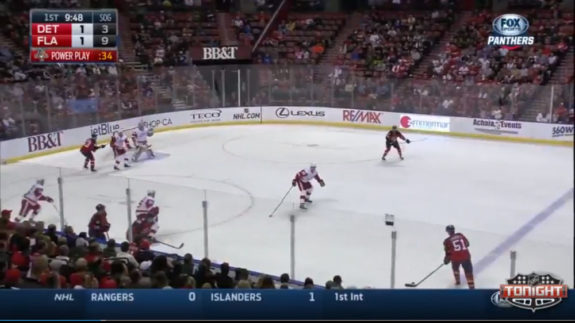 What made the Red Wings penalty kill so successful in the past was great positioning and being aggressive when the situation called for it. Chasing the puck is being too aggressive, but there needs to be some level of aggressiveness in order to force turnovers.

You want to force the point men into making poor decisions. If they turn the puck over at the blue line or have an errant pass down low, that usually leads to the puck being cleared or a break the other way.

Another important aspect of a great penalty-killing team is puck retrieval. Just like in basketball, the more rebounds you have, the better chance you have of winning the game, especially if you are limiting the opposing team’s offensive rebounds.

The Red Wings have been getting beat to the pucks as of late, which gets them out of position and leaves players wide open for opportunities. Part of puck retrieval is luck, since no one can judge where a puck is going to go when it’s leaving a stick at 90-plus miles per hour, but using multiple penalty killers to retrieve the puck from one guy on the power play usually is a recipe for disaster.

“The goalie is your best penalty killer” is a cliché for a reason. Other than the 4-1 win against the Islanders in which Mrazek had a nice bounce-back game, he has given up five, four, four and four goals in four games, with seven of those goals coming while his team is shorthanded.

The Stamkos goal shown above was a shot Mrazek probably should have stopped, and the Pirri goal was another puck that trickled through Mrazek’s pads — a shot he would save nine times out of 10.

Mrazek has started eight straight games and could start Thursday’s game against Colorado, so he has been under a lot of pressure to carry the load for the Red Wings, as they wait for Jimmy Howard and Jonas Gustavsson to return from injury.

But he has to limit the soft goals if Detroit wants to see the success it had earlier in the season on the PK.