PITTSBURGH — Curtis McElhinney stopped 23 shots, Brett Pesce and Jordan Martinook scored from way out and Michael Ferland and Andrei Svechnikov poured it on late as the Carolina Hurricanes began a pivotal five-game trip with a 4-0 victory over the Pittsburgh Penguins on Tuesday night.

McElhinney collected his first shutout of the season and ninth of his 11-year career by stuffing Jared McCann and Jake Guentzel with sprawling saves in the first period and never letting up as the Hurricanes picked up two big points as they try to stay in the mix for their first playoff berth in nearly a decade.

Matt Murray made 28 saves for the Penguins but lost for the third time in four starts since the All-Star break. Pittsburgh struggled to generate any consistent offensive pressure against McElhinney while playing without injured star Evgeni Malkin, who missed his third consecutive game with an upper-body injury.

The Penguins began Tuesday tied with Washington for second place in the crowded Metropolitan Division while Carolina sat three points behind Columbus for the second wild-card spot in the jam-packed Eastern Conference with 30 games left to play.

The Hurricanes have hung around thanks in large part to the steady play of the 35-year-old McElhinney, who improved to 12-6-1 while collecting his first shutout since March 17, 2018, while playing for Toronto.

Pittsburgh tested him early. McCann, acquired in a trade with Florida last week, collected a loose puck in front and darted across the crease. McElhinney went to his belly in an effort to poke check, missed, and then raised his right leg, which stopped McCann’s shot when McCann couldn’t get the puck in the air. He made another big stop on Guentzel later in the period and fended off a shot by Crosby from the left circle with a right pad save.

The Hurricanes didn’t let the reprieve go to waste. Martinook took a drop pass from Jacob Slavin and ripped a wrist shot from the top of the left circle that deflected off the end of Murray’s glove and into the net with 44 seconds left in the first. 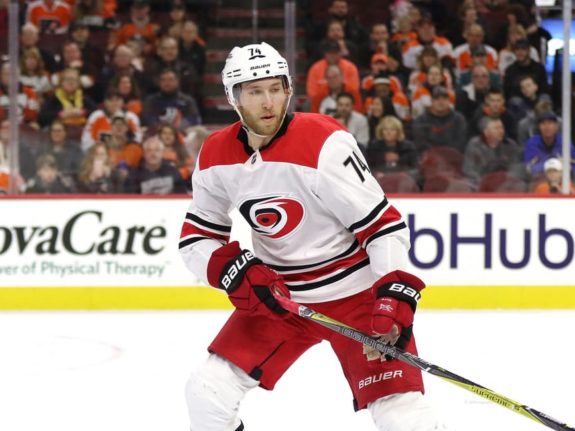 Pittsburgh had a chance to tie it when Patric Hornqvist drew a penalty then found himself alone on the door step on the ensuing power play midway through the second period. His wrist shot ended up in McElhinney’s glove. Pesce doubled Carolina’s lead shortly after the penalty expired, letting a shot go from atop the left circle that found its way through traffic — including sprawled Pittsburgh defender Jack Johnson and by Murray 12:58 into the second.

That was enough for McElhinney, who received plenty of help in front of him. The Penguins didn’t even record a shot over the first 10 minutes of the third period and Carolina’s lead was never in doubt. Ferland scored into an empty net with 1:31 left and Svechnikov added one for insurance after Murray returned with 42 seconds remaining.

NOTES: Both teams went 0 for 2 on the power play. … Referee Brian Pochmara left in the second period with a lower-body injury and did not return. … Pittsburgh D Justin Schultz skated with his teammates Wednesday morning and is close to a return after fracturing his left leg in Montreal on Oct. 13. … Pittsburgh C Matt Cullen played in his 1,487th career game, tying Hall of Famer Wayne Gretzky for 22nd on the all-time list. Carolina improved 21-1-2 when leading after two periods. … Hurricanes F Justin Williams played in his 400th game with the club.

Hurricanes: Travel to Buffalo on Thursday to face the Sabres.

Penguins: Begin a three-game road trip on Thursday in Florida against the Panthers.