The Ole Miss Ice Rebels (The University of Mississippi, for you non-Southerners) open their third season against the University of Memphis this weekend (September 9-10).  The Ice Rebels will visit Memphis as the Tigers’ kick off their inaugural season.

Ole Miss will be the first South Eastern Collegiate Hockey Conference (SECHC) team to hit the ice this season.  In addition to their road trips to Memphis, the team’s out of conference schedule has them traveling to Orlando to play the University of Central Florida Golden Knights and to Louisiana to play both Tulane and UL-Lafayette.  One of the highlights of any Ole Miss season (regardless of the sport) is always the annual in-state rivalry game against Mississippi State.  This year Ole Miss will visit the Bulldogs in Tupelo.

In addition to regularly scheduled games, the Ice Rebels will join other conference and non-conference teams at the Columbus Clash, the SECHC Pelham Showcase, the ACHA Division III South Regionals, and the SECHC Tournament.  The Ice Rebels close the season in March the same way they opened it – against the Memphis Tigers.

The Ice Rebels are coached by Kristian Skou, a native of Copenhagen, Denmark.  Skou played junior hockey in Denmark as a goalie for three Danish National Teams.  He played in the CSHL and AWHL in the U.S. before retiring from hockey in 2004.  After coaching gymnastics, Skou returned to hockey and helped students organize the club team at Ole Miss.  Skou resumed his on-ice career both in goal and as an assistant coach for the Ice Rebels.  He eventually transitioned into the head coaching position in 2011.

The Ole Miss Ice Hockey Club was founded in 2009 and is part of the SECHC along with nine other teams.  According to their web site, the Ice Rebels finished their inaugural season with a 3-12-3 record (which improved to 10-15-0 the following season).  As is typical of club league teams, the Ice Rebels continually raise funds to help offset expenses for its student athletes, who are also expected to maintain the NCAA-standard 2.0 grade point average required for competition.  The Ole Miss Ice Rebels offer students the opportunity to participate in competitive hockey while working toward their education. 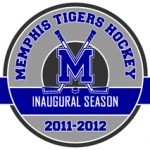 The University of Memphis is fielding a club-level hockey team for the first time this season.  They open their inaugural season against the Ole Miss Ice Rebels this weekend.  Like the Ice Rebels, the Tigers are also part of ACHA Division III.  Memphis athletics belongs to Conference USA (C-USA), not the SEC like some of their competitors.

In addition to Ole Miss, the inaugural season will see the Tigers facing Vanderbilt and Mississippi State (SECHC members) as well as Tulane, Louisiana-Lafayette, Emory, and Northern Kentucky.  They close the season with a final home game against Ole Miss.  The team hopes to finalize an away series against Alabama to complete their schedule.

Josh Hebert will coach the Tigers.  Hebert is part of the Germantown high school hockey team’s coaching staff.  He played with the Memphis Blues travel program as well as Middle Tennessee State’s Division III team.  Hebert also works as Ticket Operations Manager for the Mississippi River Kings of the Southern Professional Hockey League (SPHL).  He is joined by two former Memphis Blues teammates to round out the Tigers’ coaching staff.

4 thoughts on “Ice Rebels Ready to Drop the Puck”