Last season, the Detroit Red Wings faced a rash of injuries and were forced to bring up some of their young players ahead of schedule. Among those players was 21-year old Slovakian forward Tomas Jurco. Jurco was able to chip in eight goals and 15 points in 36 games, and drove puck possession with a dominant 54.4% 5v5 ZS-adjusted Corsi For%. Many were excited for what the 6’1″, 203 lb forward could bring to Detroit in the following season.

This season has been a different story, or so many would have you believe. Jurco’s ice-time at 5v5 has dropped a full minute from last season and overall his ice time has dropped from 13:27/game last season to just 11:55/game this season. He struggled with a back injury for part of the season and has only recently re-joined the lineup. However, he’s been stuck on the 4th line with Joakim Andersson and Drew Miller. He has just two goals and 11 points in 43 games after scoring eight goals in 36 games last season. Is Jurco regressing, or are we missing the big picture?

It’s time for my favorite game! I’ll show you player A and player B’s stats and let you make an objective decision as to who should receive more ice time.

From this table we see that Player A has a higher Corsi For%, has a higher Scoring Chances For%, plays against a higher level of competition than Player B, plays with worse teammates than Player B, but scores more points per 60 minutes of 5v5 ice time than Player B. You’d be hard-pressed to find a person who would take player B over player A, right? Well player A is Tomas Jurco, and player B is Gustav Nyquist and these are their 5v5 numbers from this season.

I have to state that we are looking at a small sample size of about 440 minutes for Jurco and 700 minutes for Nyquist. However, it’s evident from these numbers that Jurco has driven possession and scoring opportunities far more than Nyquist. In fact, Jurco has 11 points at 5v5 compared to just 15 points for Nyquist, despite Nyquist playing 250 more minutes than Jurco. Nyquist has made his living this season on the powerplay, where he has scored 12 goals and 21 points in only 153 minutes of powerplay ice time. The point of this article isn’t to bash Nyquist. The guy is still electrifying when he has the puck, but what I wanted to show is that Jurco has been extremely effective in the limited minutes he’s received to the point where he deserves to have an opportunity on the top-6 or at least more minutes with Riley Sheahan.

This season, Jurco has been extremely effective when paired with center Riley Sheahan. Check out his numbers I pulled from HockeyAnalysis.

From this table you can see that in the 155 minutes the two have played together, they have absolutely dominated the opposition. They have doubled up the opposition in goals, and have nearly done the same in shot attempts. Five of Jurco’s 11 5v5 points have come in these 155 minutes. When paired with Sheahan, Jurco is averaging 1.93 points/60 minutes at 5v5, a rate that would rank 2nd best on the Red Wings behind only Stephen Weiss’ 2.6 points/60 minutes.

In fact, Jurco is one of the more impressive players when we strip usage effects away from his Corsi numbers. Domenic Galamini (@mimicohero) runs Own The Puck and he has developed HERO charts, which strip away usage effects such as quality of teammates, quality of competition, and zone starts, allowing us to objectively assess the impact a player has on puck possession. Check out Jurco’s HERO chart which includes data from 2013-2014 and this season. 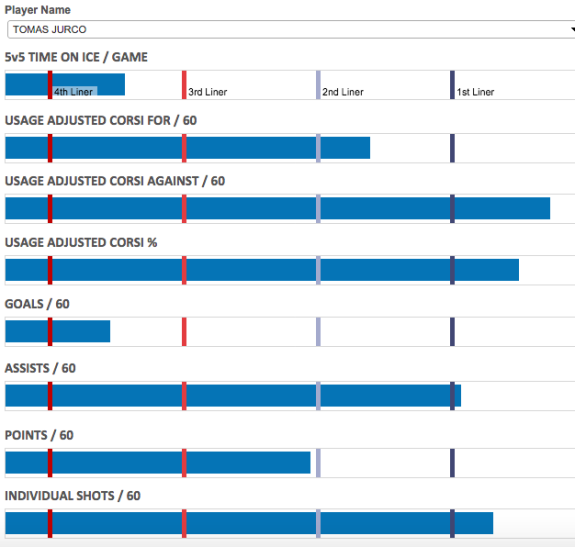 You can see that Jurco receives the Ice-Time of a 4th liner, but his usage adjusted Corsi For% is clearly that of a 1st line player. In fact, of the 390 forwards to play at least 660 minutes at 5v5 over the last three seasons, Jurco’s usage-adjusted Corsi For% ranks 46th. That’s better than Alex Ovechkin, John Tavares, Henrik Zetterberg, and Patrick Kane. I’m not advocating that Jurco immediately be promoted to the first line, but you can see that when we strip away the effects that teammates, competition, and zone starts have, Jurco drives puck possession at the rate of a 1st line player. Can you imagine how huge of an asset this would be on the 3rd line when paired with Sheahan? The Wings could use this 3rd line to dictate play for 12-15 minutes a night, making it even tougher for the opposition to generate shots attempts.

The Red Wings have been using Sheahan with Luke Glendening and Stephen Weiss but it looks like for the game against Montreal, the Wings will move Drew Miller up and Stephen Weiss down to the 4th line. I think if the Wings are looking to get some more scoring from their 3rd line, the Wings have to consider moving Weiss and Jurco up to play with Sheahan and moving Glendening and Miller back down to the 4th line to play with Joakim Andersson. Jurco has been one of the most dominant puck possession forward for Detroit this season and I understand if Babcock is being tougher on him than others, simply because Jurco has the potential to be very good. We’ve seen how well Tatar has responded to Babcock being hard on him, so we have to trust his judgment. However, if the team hits a dry spell on offense, I wouldn’t hesitate to flip Jurco up to the 3rd line or even the 2nd line, because he’s competing at a very high level.