Many saw the nomination of John Scott to the All-Star Game as a joke. They thought he’d be sucking air trying to keep up and be an eye sore on the ice.

Scott, captain of the Pacific Division, was the focal point of the weekend. He was funny, had a good time and was surprisingly effective for the Pacific Division team, who won the 3-on-3 tournament. As Scott said in the post-game press conference, “You can’t make this stuff up.”

He was good enough and entertaining enough to put together 11 memorable moments from the 2016 All-Star Game.

From taking a picture with the John Scott puck outside Bridgestone Arena to the bear hug after Scott’s second goal, Brent Burns was Scott’s biggest champion throughout the weekend. He helped to make it an all-together enjoyable All-Star Game.

Roenick was one of many pundits who were outspoken about not liking Scott being part of the game. Roenick had the misfortune interviewing Burns and Scott between periods. But, to Roenick’s credit, he owned it and brought it up in the interview. Good on Scott ofr taking the past insult in stride and taking the opportunity to chirp Roenick a bit.

Scott was fun in the skills competition, even if he was overshadowed by Jaromir Subban, Burns’s kid and other shenanigans. Scott’s highlight? Going for the spin-o-rama in the shootout. He also registered a 95.8 mph slapshot in the hardest shot competition, beating Aaron Ekblad.

Kane and Scott are former teammates and had some fun at each other’s expense a couple times over the course of the weekend. The two had a fake scrap at the end of a great sequence in their opening game of the tournament. Scott checked Kane, knocking him to the ice, took the puck and went in on a breakaway. He didn’t score and the result was a break headed the other way where Kane did score. Kane immediately dropped the gloves for a battle with Scott.

On the play, Scott was credited with a hit on Kane, which was just the second hit registered in an All-Star Game since 2003. 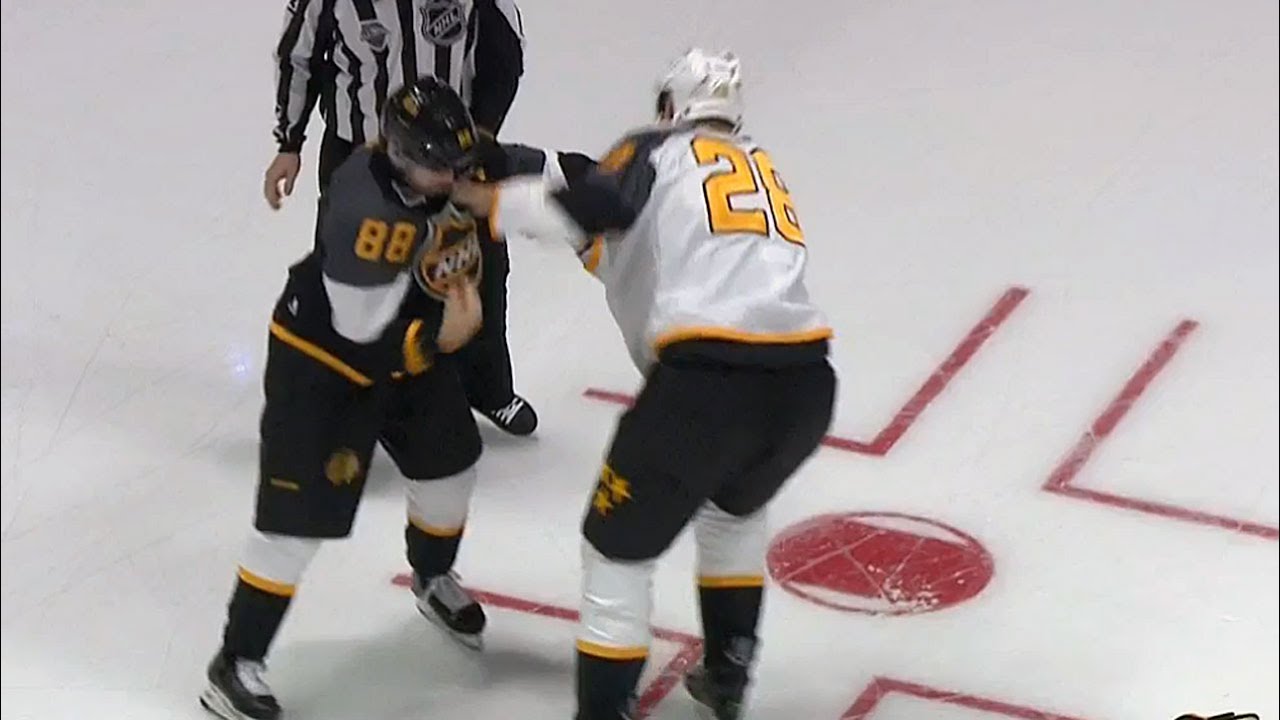 Dustin Byfuglien on if Patrick Kane and John Scott had really fought: "Kane would have suckered him good if they really went at it."

7. Getting the Check from Bettman

A part of the weekend’s storybook ending for fans and Scott was that after the league tried to get him out of the game, 5-foot-7 Gary Bettman had to hand over a $1-million check to the 6-foot-8 Pacific Division captain. 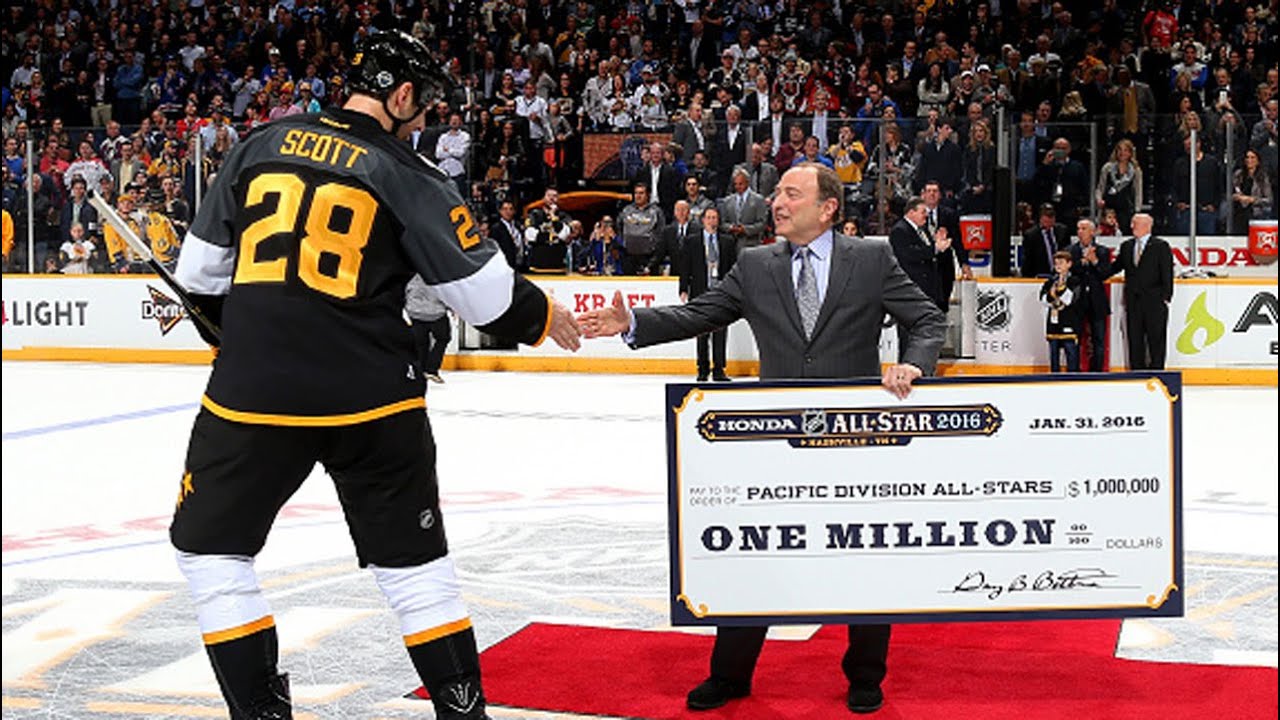 John Scott on what Bettman said to him: “He said I’m proud of you. That was quite the story, Quite the game. We’re just happy you’re here.”

Scott pre-empted the All-Star Game with an article at the Player’s Tribune that brought everyone onto his side. He talked about the league using his kids in an effort to get him to step down and how he came to embrace being voted into the All-Star Game unexpectedly. It’s a great piece outlining why he decided to play, how he hopes his kids are proud of him and why he was playing for every grinder out there who never got recognition like this.

It’s worth a read.

Scott took the post-championship interview with Pierre as the captain of the winning team. He got some big cheers, was humble and then had his interview interrupted by teammates lifting all 260 pounds of him into the air. 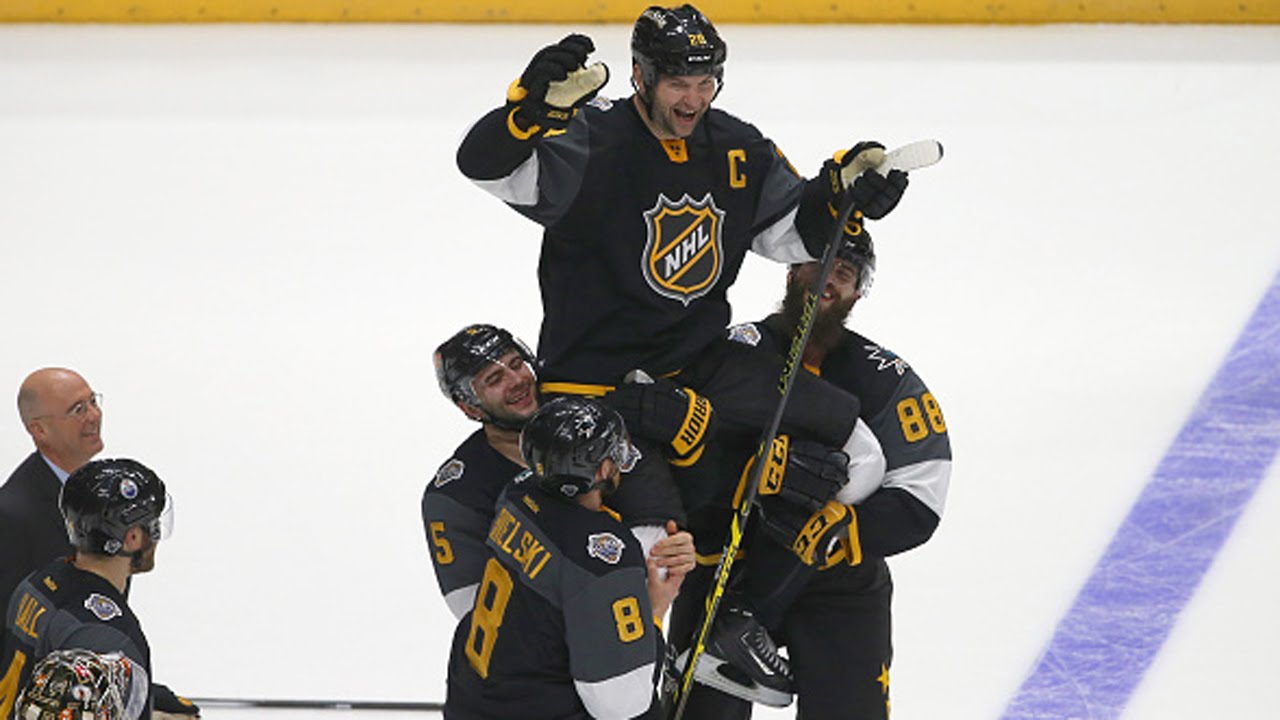 The former teammates didn’t just scrap together, they made for one of Scott’s more charming moments early in the weekend. When the players were introduced, Patrick Kane’s name was met with loud booing. Those boos were almost as loud as the cheers that Scott’s name drew and Scott thought that was pretty funny.

Later Scott said that Kane called it before it happened. He knew he’d get booed and that Scott would get some big cheers.

John Scott cracks up laughing after Patrick Kane gets booed by the Nashville crowd. #NHLAllStar pic.twitter.com/2ub2KdG8L6

The second of Scott’s two goals was a beauty. Burns hit him with the stretch pass to get the breakaway going and Scott went shelf on Devan Dubnyk.

John Scott on a breakaway. No mistake. #NHLAllStarhttps://t.co/f6GSf8fCVQ

It wasn’t as pretty as his second goal, but Scott potted his first less than a minute into the Pacific Division’s first game. The man gave the fans everything they wanted. He also celebrated like a boss.

It was a perfect cap to the most watchable All-Star weekend in recent memory: John Scott was named MVP.

This is not how anyone thought this weekend would turn out. The best part of this may be that Scott was a legitimate option for MVP. He was captain of the tournament champs, tied for first in goals and looked ok out there. Even better: He appears to have no idea that he was voted MVP when the announcement is happening.

NHL says that the overwhelming flood of #VoteMVPScott was the reason he won. Couldn't deny he had most support, despite not being an option.

After the game Sportsnet’s Elliotte Friedman reported that Scott’s helmet was taken from him and will be headed to the Hockey Hall of Fame.

John Scott says this is the best week of his life with his twins likely coming right after this All-Star weekend pic.twitter.com/5ZH3I31rN7

Yes Big John being the MVP was awesome to watch but knowing first hand how good of a guy and teammate he is makes this all so special!

What a great weekend this has been. Nashville did a great job and #JohnScott did the rest. Big 👍🏻.! #NHLAllStarWeekend

Congrats John Scott that was fun to watch #MVP! Looked like Nashville put did it right as well #thefansgotitright #NHLAllStarWeekend

"You hate to lose, but if I ever wanted to lose, ever, I’m glad I lost today.” – Jaromir Jagr, in reference to John Scott.

Love it!!!!! Have not smiled this much in a long time watching a hockey game.. #JohnScott #MVP #NHLAllstar

If watching John Scott win the MVP doesn't put a smile on your face, you aren't human. This game is supposed to be fun! #AllSmiles

Big congrats to John Scott on winning MVP… Couldn't have been a better end to a great weekend!

John Scott. Hats off to you pal. Lots of fun getting to know ya this weekend. What a story. #MVP #NHLAllStarWeekend

I think everyone on the winning team should give John scott their 100k.

Best part of the all star game so far is watching John Scott out there. Great to see the big guy score a goal and have some fun

John Scott's wife: "I feel like I'm dreaming. Can't believe this is happening. It's so nice for people to see who he really is."