I was recently able to do an in depth interview with promising young Flames prospect, netminder Joni Ortio, who was drafted in the 6th round (171st overall) in this past summer’s entry draft. Like his idol, Miikka Kiprusoff, Ortio is from the goalie hotbed of Turku, Finland. 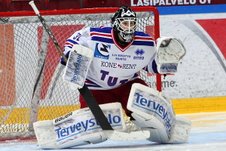 Ortio is not your typical 6th round pick, however. TSN’s Scott Cullen earlier this year, in his analysis of the value of a draft pick, calculated a prospect drafted at a similar point as Joni was taken, has a 14% chance of playing at least 100 games in the NHL. As well, given that the goaltending position seems to be the toughest for NHL scouts to project, one would think Ortio might be a long-shot to crack the big leagues. Nothing could be farther from the truth.

Ortio is a focused, mature beyond his years, young gatekeeper with tremendous upside and a brilliant future.

“[Ortio]can attribute his opportunity in part to his idol, for it was through practicing with Kiprusoff that Ortio caught the eye of Flames goaltending coach Jamie McLennan, who stated “Joni was out on the ice with us doing the drills. We were skating with some NHL players and Joni was standing right in there with him. I noticed, asked Kipper about him, did a little research, and kept an eye on him.”

McLennan is very excited at Ortio’s prospects, feeling that with a little time and patience, the sky is the limit for the young backstop.

Ice Breakers: What is/are your Favorite(s):

–  Movie(s)? All Die Hard films and The Hangover

–  Quote? Why leave something for tomorrow if you can do it today

–  Athlete(s) outside of hockey? Usain Bolt

–  Sports jersey? The national team (Finland) jersey from the U18 world championships

–  Sports (other than hockey)? golf and soccer

Chris Ralph (CR): Which person in your life has had the most impact on your hockey adventure thus far in your life?

Joni Ortio (JO): Probably my dad, he’s an ex-hockey player and he has supported me since the first time I put skates on my feet. And obviously Urpo Ylonen (his goalie coach) has had a great influence on my game.

CR: What is your most memorable hockey event so far in your career?

CR: You chose to stay in Finland to further your development rather than going to the Swift Current Broncos of the WHL, the Canadian junior team that drafted you. What was your reasoning for choosing that path?

JO: The main reason in staying home in Finland was finishing my high school. This is my last year in high school and I want to finish it properly before leaving Turku and Finland.

CR: How is your season going so far in Finland and what is it like to play in your home city team, TPS Turku?

JO: My season this far has been pretty good. It’s quite intense because I’ve played for 4 different teams already this year (TPS elite team, TPS juniors, TuTo which plays in the second highest league and then the national team). I have played only one game the TPS elite league team this year but It’s really nice playing in my home town and feeling the support from the people in Turku.

CR: What number do you currently wear? Is it simply a random number or is there a reason behind the choice?

JO: I currently wear number 31. There’s not specific reason behind that number, I’ve just always wanted to play with number 31 but someone else has always had it. This year it was available so I picked it.

CR: Do you have a specifically designed mask? If so, is there a reason behind the design?

JO: No I don’t have, I simply have a mask with TPS colors on it.

CR: Why did you become a goalie (versus playing forward or defense)? Did you always play this position since starting hockey?

JO: As a little kid I was attracted by the goalies equipment. Then I got to try playing as a goalie and I practically fell in love with it. I played also as a forward until I was about 11 years old but since then I’ve been playing only as a goalie.

CR: You’ve said that you idolize Mikka Kiprusoff. Are there any other goalies that you have modeled your game after, or particularly admire?

JO: Kipper is the biggest idol that I’ve had but I’ve also admired Fredrik Norrena who played for the Blue Jackets couple years ago. I know him by our family so I’ve been watching him play a lot.

CR: Have you ever been involved in a goalie fight? If so, how do you think you did?

JO: No I haven’t but I’d like to try it sometime if there is a chance.

CR: How is it working with coach Urpo Ylonen, who also was a part of Kipusoff’s development?

JO: Working with him has been great. He’s got such an amazing knowledge in goaltending that it’s simply a gift working with Urpo.

CR: Have you been treated any differently by friends and family since you were drafted in the NHL?

JO: My closest friends still see me as the same guy as before the draft and that’s only a good thing because the draft hasn’t changed me as a person so there’s no reason why my friends should treat me differently. Of course, there are some people that now come talk to me that didn’t come before but I’m not that close to those people.

CR: Describe your style of play?

JO: While I was in Calgary for the development camp quite a few people said to me that I have a similar style with Kipper and I guess it’s at least partly true. I’m not simply a butterfly goalie but I’m not a stand up goalie either so I’m something between those two styles.

CR: I actually had a quick viewing of your play during the Flames Summer Prospect Camp and was impressed with your fantastic quick glove hand. What do you consider your strengths to be?

JO: I have quick reactions and one of my biggest strengths is my mental balance. My positioning is also one if my strengths, partly because of my size.

CR: What are some aspects of your game you think you have to work on?

JO: I definitely have to get more strength and I need to get my legs and lateral movement quicker.

CR: Who is your favorite teammate(s) so far in your career (and why)?

JO: My favorite player so far has been Toni Rajala from the national team because if I let in an easy goal he usually bailed me out with scoring two goals for us.

CR: Who is the funniest teammate or player you have encountered?

JO: There have been so many funny guys in my teams so it’s impossible to name just one.

CR: Can you recall and relate the most humorous hockey event either involving yourself or that you have witnessed?

JO: The funniest thing so far in hockey happened to me about 3 years ago. I was trying to pass the puck to a teammate in the far blue line. When I shot the puck it hit our defenseman and went into our own net. It wasn’t funny at the time but now it’s quite hilarious.

CR: How was your experience at your first NHL prospect camp with the Flames? What was your first impression of the city of Calgary?

JO: It was simply an amazing experience. Everyone there was extremely nice and it was easy to fit into the group and get to know all the guys. I didn’t get to see the city that much but the little I saw the city seemed very nice and the people were very friendly. I can’t wait to get there again.

CR: You had a great showing at the U-18 World Championships earlier this year and played a big role in defeating Canada in a shootout in the bronze medal game (video highlights). How was that experience?

JO: It was the greatest experience so far in my hockey career. Like I said earlier coming back from a 3 goal deposit against Canada isn’t an easy task and won’t happen very often so that is a game I will remember for the rest of my life for sure.

CR: Is making the 2010 WJC Team Finland a primary goal for you this year?

JO: Yes, I would say it’s my primary goal this season. My other goal is to play in the Finnish Elite League but for now the main goal is the World Juniors.

CR: Do you have a nickname?

JO: Ortsa is my nickname which was my dad’s nickname when he played hockey.

CR: Which NHL city/arena are you most looking forward to playing in?

JO: Well obviously the Saddledome but also I’d like to play in the Joe Louis Arena in Detroit because of the great atmosphere they have there.

CR: Who’s the toughest/fiercest hockey opponent(s) you have faced so far in your hockey career?

CR: Who’s the craziest teammate, on and off the ice, you’ve had so far?

JO: One of my present teammates but I can’t say his name because he don’t know he is crazy.

CR: Do you have a timeline in mind on reaching the NHL?

JO: No, I don’t. I’m just trying to work as hard as I can after this season we will see again what is the best solution for next year.

CR: If you only had two choices and forced to pick one: 1. You would win the cup in your first season but never play hockey again OR 2. You would have a 10 year career with one Hart Trophy but NEVER make the playoffs – which would you choose?

JO: I would choose to win the cup because all the work we players put into hockey aims for the playoffs and winning something.

CR: On those rare occasions when you are away from the hockey world, what things do you like to do in your free time?

JO: I try to relax and not think about hockey at all. I like to spend time with my friends and my girlfriend every time I have a day or a weekend off.

CR: At the end of your career, what actor would you like to see play you in a movie? And your co-starring actress?

JO: Adam Sandler because he is so hilarious and co-starring actress would definitely be Megan Fox, and it is pretty obvious why I picked her.

CR: If you were not a hockey player, what career path would you think you take?

JO: I would probably become a lawyer.

CR: This past Saturday after watching a hockey game, the TV network went immediately to figure skating (which I seldom watch) and the first skater was the beautiful

Kiira Korpi of Finland. Are all Finnish girls this hot and any other girls you’d like hockey fans become aware of?

JO: Absolutely. Most people say that Swedish girls are the hottest in Europe but I think that Finnish girls are way hotter than Swedish girls. There’s no one else in particular but keep an eye on Kiira at the winter Olympics in Vancouver!

This wraps up an outstanding interview with one of the top prospects in the game today. Thanks “Ortza” for taking your time to talk with me. You have survived “The Hockey Spy’s” Hot Seat. Best of luck for the rest of your season in Finland, and, of course, looking forward to when the Flames come calling and seeing you in action in North America!