The Detroit Red Wings still have two more games remaining in the month of March, but it’s already been a memorable month for Justin Abdelkader. On February 28th, Abdelkader had 13 goals and 31 points, numbers that were already a career high for the eight-year veteran. Now, on March 29th, Abdelkader sits at 23 goals and 43 points. Abdelkader’s 10 goals this month are the 2nd most in the entire NHL, trailing Columbus Blue Jackets’ forward Scott Hartnell, who has tallied 11 goals in 14 games. Just how unlikely has Abdelkader’s hot streak been?

Take a look at Abdelkader’s statistics from the month of March.

As you can see, he’s been absolutely outstanding in the month of March. His shooting percentage in particular is out of this world. I had to ask myself, is this one of the best months in recent memory? Over the last 10 years, I could only think of two runs that compared to the one Abdelkader is on. One is Gustav Nyquist from March of last season, and the other is Johan Franzen in March of 2008. Check out how Abdelkader compares to both of those runs.

Abdelkader is on a nice run right now, but I still think that both Nyquist and Franzen’s March Madness runs are slightly more impressive. The sheer goal numbers and possession statistics from Franzen are amazing and the ability of Nyquist to score all those goals against a high level of competition and unfavorable offensive zone starts is equally impressive. Abdelkader still has two more games to go this month so he might make a run to match Nyquist’s goal total.

While both Nyquist and Franzen had amazing runs, neither was really panned out the way many Red Wings fans hoped (whether or not the expectations were realistic). Since that spectacular run in 2008, Franzen has scored 139 goals in 382 games and may not play again after yet another concussion. Nyquist has also been incredibly inconsistent this season, scoring 20 goals in his first 50 games, but just four goals in the past 24 games. Is this run a sign that Abdelkader has found a scoring touch and can be counted on to be a 20-goal scorer in the years ahead?

As you can see, Abdelkader wasn’t exactly a prolific goal scorer entering this season. Nearly 40% of his career goals have come this season, and more than 15% of his career goals have come in the last 29 days. You can see that this season he has had the opportunity to play with slightly better teammates and has benefitted from more offensive zone starts. However, he’s not really shooting the puck more than he did in the past. Prior to this season, Abdelkader took 8.65 shots/60 minutes at 5v5. This season, he’s down to 6.91 shots/60 minutes at 5v5. Instead, he’s benefitted from a significantly increased shooting percentage. 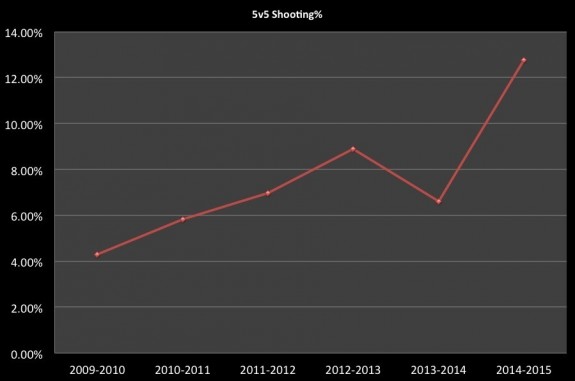 Can Abdelkader Keep This Up?

We saw what happened last season when Nyquist had an 18.3% shooting percentage. Many fans, including myself, got caught up in the hype and thought that the Wings might have a 40-goal scorer. While we can’t cross out that possibility, we’ve seen Nyquist struggle with consistency this season as his shooting percentage has dropped to 14.0%. What if Abdelkader experiences a regression back to his career shooting percentage of 6.2%?

There’s nothing here to indicate that Abdelkader is shooting the puck more, generating more scoring chances, or getting more shots through to the goalie. We don’t really have anything that suggests the “process” has changed for the better and that we can expect this production to continue in the future. I think realistically Abdelkader will settle in as a guy that can score 15-20 goals in a season. I think he’s gained a lot of confidence from this run, but we have to remember that this is a guy who had never scored more than 10 goals in a season prior to this year. Now he’s got 10 goals in a month. Right now, let’s sit back and enjoy this magical run that Abdelkader is on and hope that he can keep this up for as long as possible.