The Stars started the week with two impressive road victories. First was a tight-checking game against Arizona on Tuesday night. Ryan Garbutt got the Stars back in the win column with a shorthanded goal that broke a 3-3 tie with less than two minutes remaining in the 3rd period. Next, on Thursday a rested Stars team played the Kings, who had played the night before. The Stars were in control throughout and stunned the defending Stanley Cup Champion Kings with a 2-0 win on the road.  Kari Lehtonen was fantastic stopping all twenty-seven shots on goal.
Finally, on Saturday afternoon they returned to Dallas and lost to the Minnesota Wild 2-1. Whenever the Stars take the ice at the American Airlines Center, it must feel like Groundhog Day. Once again, the Stars played well for 40 minutes but could not push forward for a win on home ice. The Stars are last in the Central Division with an overall record of 6-7-4 and have a League worst 1-4-4 record on home ice.

What is it about playing home? While the Stars have been competitive in all home game, they continue to fall victim to the odd soft goal against and lack timely goal scoring.  Meanwhile, on the road the Stars are an impressive 5-3-0.  The only logical answer to the late game breakdowns on home ice is some type of a mental issue. That said, it’s imperative that Stars seek out a solution as they are losing valuable points in the standings.

One bad pass, and game completely changes. Wild is buzzing and full of energy now because of Dillon turnover.

After tonight’s game at Chicago, the Stars return to Dallas for a critical four-game home stand.  Perhaps they should treat the home stand like a road trip and stay at a local hotel. Some teams do this during the NHL Playoffs to avoid distractions. Also, as the old hockey adage goes, “Your best players have to be your best players”. The Stars top six forwards have underperformed on home ice. Tyler Seguin is among the league leaders in goals and points but has not been consistent after the 2nd period in home games. Jamie Benn has not scored in ten games and only has two goals at home this season. Jason Spezza has only one goal on home ice and Ales Hemsky still has zero goals on the season. Goalie Kari Lehtonen was stellar in the two road victories this week but couldn’t shut the door against the Wild.  Some coaches prefer to match lines, but Lindy Ruff prefers to roll his lines. Perhaps they should consider matching their top six forwards against the best possible match-ups.

Love to hear thoughts from Stars fans on how to break out of the home 3rd period/overtime funk. What are your thoughts?

Third Line is Back

One line that Ruff can match up with anyone is the Garbutt, Eakin, Roussel line. Ruff originally put the trio together last season, and they were one of the most consistent hard-working, energy lines in the NHL. Cody Eakin’s contract negotiation and nagging injuries contributed to a slow start for the line this season, but they are starting to click. Garbutt scored both game-winning goals in Arizona and Los Angeles; Eakin returned to the line-up against Los Angeles, and Roussel is second on the team in goals with five. 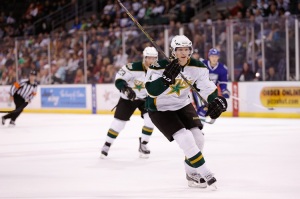 As mentioned in an earlier Stars post, Dallas acquired forward Travis Moen from Montreal in a trade that sent Sergei Gonchar to the Habs.  Moving Gonchar’s contract for Moen was an excellent move by Stars GM Jim Nill. Moen is a grinder who adds penalty killing depth, along with a physical presence to match up with likes of John Scott, Ryan Reaves, etc. It also resulted in John Klingberg being called up from the Texas Stars on Monday.  Klingberg played in all three games this week and though he is yet to record his first NHL point, he has performed well with a plus two rating.  Based on first impressions with the Dallas Stars, Klingberg plays with great poise and is not averse to jumping into the attack when the moment presents itself. The 22-year-old rookie from Lerum, Sweden is 6 foot 172 lbs.  Klingberg is also a right-handed shot which has lacked on the Stars blue-line since last season’s departure of Stephane Robidas. Having played against men in both Finland and Sweden, Klingberg isn’t your typical NHL rookie. A Stars 5th round pick in 2010, Klingberg scored eleven goals and seventeen assists last season while playing in fifty games for Frolunda of the Swedish Elite League. He had a slow start in training camp that may have been at least partly attributed to recovering from hip injuries.  Prior to being called up, Klingberg played in ten games for the Texas Stars, and produced four goals and eight assists.