Looking to finish strong on home ice, the Los Angeles Kings sure have finished with a flourish at the box office.  The club set an all-time single season record for average attendance in 2011-12 and sold out all but two home games.  In fact, at one point the Kings had a sellout streak of 25-straight this season.  So would those fans witness a Pacific Division coronation?

Well not quite.  But there was plenty of firepower on display, as the Kings hosted the San Jose Sharks.  While both teams knew they were in the top eight, midway through their match, it was awfully hard to tell as they were each scrapping and clawing for extra points and home ice in the first round.  It wasn’t exactly a goaltending clinic either.

In a first period dominated by the Kings shot wise 18-8, they would take advantage on the power-play.  Alec Martinez netted his sixth marker of the year, putting the Kings up one.

However Ryane Clowe wouldn’t allow the Sharks to get sluggish, getting into a scrap with Matt Greene.

Toward the end of the period, Jason Demers would respond for San Jose and it was locked at one after one.

To start the second, Los Angeles was able to kill off a carryover five minute boarding major by Kyle Clifford on Logan Couture.  Then the Kings would cash in on the power-play yet again.  On a mad scramble in front, Jarret Stoll found daylight and the back of the net for his sixth and the Kings regained the lead at 2-1.  Shortly thereafter, it was the captain Dustin Brown, snapping home his 22nd of the year to double the Kings advantage.

Yet not soon after, another scrap involving Clowe and this time Clifford, seemed to reinvigorate San Jose.  So too did a late interference penalty by goalie Jonathan Quick.  Just before the end of the period, a Joe Thornton tip-in pulled San Jose within one.  Quite a momentum marker to go into the locker room. 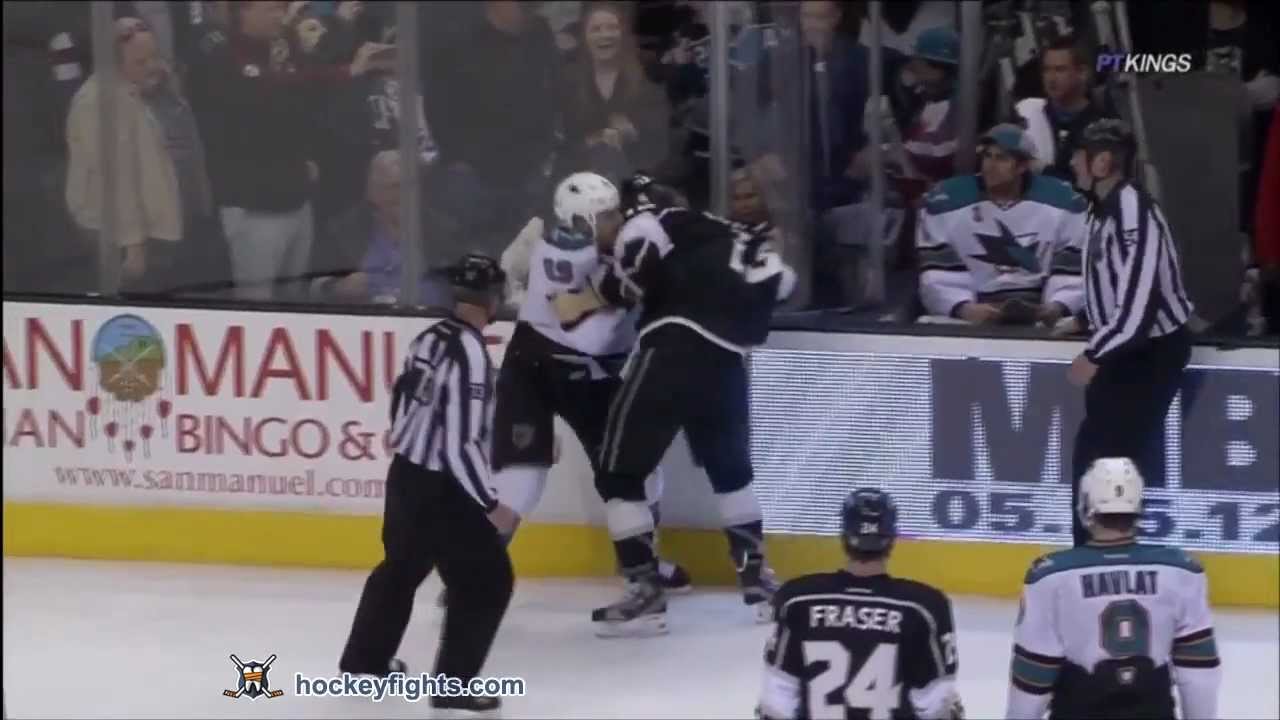 It didn’t take long for the Sharks to seize on that momentum in the third.  Off a shot from the point, Clowe ended up racing free down the ice and put one home to even the score at three.

Following that came the laser show.  Aided of course by (say it with me) more power-play goals.  A Justin Williams drive, gave L.A. a 4-3 edge.  But just as easily, a slinging wrist shot by Patrick Marleau tied things up once more at 4-4.

Later in the period there would be more power-play fireworks.  Martin Havlat busted through to give the Sharks their first lead of the night at 5-4.  Minutes later though, it would be Williams again with the extra attacker, in fact a 5-on-3, and the game was then squared at five.  Overall, L.A. was 4-of-7 on the power-play.

As the Kings remained on a 5-on-4 advantage, there was quite a bout of controversy.  It came when Stoll was rushing down the ice for L.A. and Clowe on the San Jose bench, reached over and touched the puck, which should’ve resulted in an additional Sharks penalty, but went unseen and uncalled.

Hence the game moved on to OT with the score at five all.

When nothing could be resolved there, a game that was a shootout, naturally progressed to a shootout.

During the shootout, both netminders shined but Antti Niemi was just that much better, turning away all three Kings’ shots, while Joe Pavelski provided the winner for the Sharks.

So here’s where we stand with just one more game remaining in the Kings season, a tilt at San Jose.  Los Angeles still remains atop the Pacific Division with 94 points and holds that position at the moment by virtue of a regulation/overtime win tie-breaker over San Jose (34-33), which also has 94 points by virtue of their shootout victory.  Additionally, L.A. also has the same amount of regulation/overtime wins as the Phoenix Coyotes, but the Coyotes have one less point.

While the Kings, Sharks and Coyotes are all going to the playoffs, home ice is very much up for grabs.  Heck, until San Jose topped Los Angeles in the shootout, things could’ve gotten really wild and wacky, all the way down to goal differentials where the Sharks would’ve had to have beaten the Kings by at least three goals, but throw that one out the window.  As for Phoenix, they still have two games left, at St. Louis and at Minnesota.  Of course we all know how the Wild played spoilers in game 82 last season.

To summarize, L.A. is in the playoffs and still in good shape for the Pacific Division.  There’s just going to be a little bit more heavy lifting to get there.