There were Devilish smiles all around the table Tuesday at the Prudential Center news conference to formally announce the signing of Ilya Kovalchuk.

Chairman and Managing Partner Jeff Vanderbeek, who stepped up this summer  to put his own footprint on the Devils’ hockey landscape, welcomed Kovalchuk back to Jersey’s team.  With this signing and the addition of Jason Arnott, Anton Volchenkov, Henrik Tallinder and Johan Hedberg since Canada Day, July 1, Vanderbeek had every reason to be smiling. The Prudential Center that he and his partners built will be Rockin’ the Red come September.  Their commitment to the franchise’s future is solid.

“Patience was the key,” he said, when asked  to pinpoint the hardest part of the recent negotiation.  “We made the best offer we could but it was up to Ilya to decide where he wanted to play out the final chapter of his career.  I want to thank my partner, Michael Gilfillan, for his support over the last three weeks and for joining me in this patient wait.”

Lou Lamoriello quietly stated that Kovalchuk was “one piece, a missing piece in the puzzle, that the team needed to continue being successful.  Ilya wants to be part of the team.  I have always said that the logo on the front of the jersey is more important than the name on the back and he agrees.  That is a conversation we had back in February when he joined the team.

Entering into this contract was not a decision I could make.  The owners of the team, Mr. Vanderbeek and Mr. Gilfillan, had to decide how far they were willing to go to make this happen.  It is to their credit that they had the foresight and the patience to see it to its conclusion.”

John MacLean’s smile was the brightest of them all.  The newly anointed head coach looked like the kid at Christmas who got both the new bicycle and the pony.  Sitting directly in front of the podium were Devils stars that had flown in from various points in the country to welcome their new teammate: Marty Brodeur, Zach Parise, Jamie Langenbrunner, Patrik Elias and Pierre-Luc Letourneau-Leblond.

As Johnny Mac waxed poetic about the team’s new offensive power, the ability of his forwards to take greater chances, to look around and create, he was forced to pause a moment to reassure his frowning Future-Hall-of-Fame goalie that team defense would not be neglected.  The players all laughed and MacLean promised the fans a great year.

Ilya Kovalchuk, the fourth man on the podium was at first nervous and a bit self-conscious, as if he 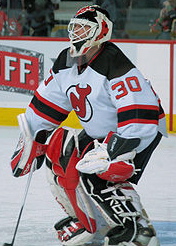 wasn’t quite sure that the events of the past 48 hours had really happened.  He thanked the owners for their patience and generosity.  He thanked Lamoriello for his guidance.  He thanked his teammates for their tremendous support, noting their presence and the effort each had made to fly in from various points across the country to be there for him.

Acknowledging the importance of Marty Brodeur, long the public face of the Devils, Kovalchuk jokingly urged Vanderbeek to “sign him back for a couple more years.”

Regarding his reasons for signing with New Jersey, the vaunted star mentioned the consensus of he and his wife that the schools and neighborhoods available there were best for the way they wanted to raise their three children.  A second factor was the organization’s commitment to winning.

“When I cam here in February the first thing I saw was the way the organization treated their players and how the players, in turn, played for each other, how they always had each others backs.  I wanted to be in an organization that has winning most on their minds.  Mr. Lamoriello always puts the best possible team on the ice.  This was the biggest decision of my life.  Now I will be a Devil for life.”