It’s taken four regular season games for Jonathan Bernier to stand out as the Leafs best goaltender. I know, I know, it’s only been four games. Four games is nothing, truly. The goaltending performances we’ve witnessed from Bernier and Reimer to this point, will surely level off and balance out.

That being said, at the moment, using the small sample size we have at our disposal – Bernier is clearly better than James Reimer.

Bernier sports a 1.18 GAA and a 0.963 SV% after two starts and a half game Reimer bailout performance against the Ottawa Senators in the Leafs home opener last Saturday.

Last season, when relied on, Reimer was solid for the Leafs. But he wasn’t amazing. And that’s why Bernier is here. 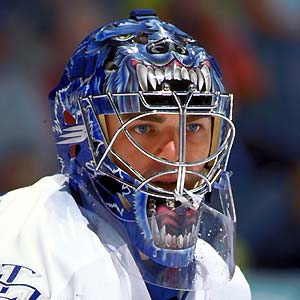 I remember when Curtis Joseph was signed by TML back in the summer of 1998. Leafs fans were split in allegiance. Incumbent net minder Felix Potvin had already won over Leaf Nation in the early 90’s. Some fans didn’t want to accept Cujo so quickly because their boy Felix was a Toronto legend.

It didn’t take long for The Dog to chase away The Cat. Potvin was booted out of town by management only three months into the season. His time as a Leaf, done.

I don’t suggest Reimer will be traded any time soon. The NHL is different now. The Leafs would be smart to keep two capable goaltenders in their repertoire.

What Will Randy Do?

I’m personally very curious to see what head coach Randy Carlyle does moving forward. Bernier is the obvious hot hand at the moment, making him an easy choice to start tomorrow night in Nashville against the Predators.

Reimer, however, was arguably the Leafs MVP one season ago. It’s very reasonable to believe he deserves an opportunity to redeem himself immediately. My guess, Reimer starts for the Leafs tomorrow. Over the last few seasons he’s earned the right to respond.

At the end of the day, both goalies are professionals, well aware of the situation they are in. For Bernier and Reimer, winning games when called upon is the main focus. The Leafs are depleted with injury – whichever goalie gets the call tomorrow against the Nashville Predators, he’ll likely have to be a hero.