Well, after half a season of very much movement, it seems we got paid back for it all in one night with two pretty big trades in one evening. We got Ryan Johansen heading to Nashville for Seth Jones. We got Vinny Lecavalier and Luke Schenn heading to Los Angeles for Jordan Weal and a pick. Even Mike Richards signed in Washington. What have the Toronto Maple Leafs done?

That’s a pretty small move. Now, who knows what Morin can eventually do with the Leafs but it’s safe to say this not the type of trade that Leaf fans have been waiting for. First off, Panik didn’t played a game for the Leafs all season. I’m pretty sure that the fans want to see someone off the roster move.

With the movement hopefully starting to pick up before the February 29th Trade Deadline, the Leafs should start looking into the interest in some of their players. Of course, the first thing that comes to mind is the players that are set to become unrestricted free agents. The Leafs have Michael Grabner, Shawn Matthias, P-A Parenteau, Mark Arcobello, Brad Boyes, Roman Polak and James Reimer set to be UFAs. Now, not all of those players will be dealt. However, there are a few of them that are performing pretty well. 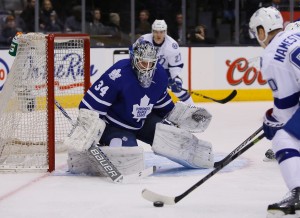 Parenteau has already eclipsed his goal total from last year and could fetch the Leafs as high as a second round pick from the right team. Grabner has played pretty well when playing with Nazem Kadri. Matthias and Boyes could fetch the Leafs mid- to low-round picks. Polak could be useful to a team looking for a defensive defenseman. The biggest question mark is Reimer. Will the Leafs stick with him or choose to sell him off when his value is at its highest? That is, assuming he picks up where he left off.

Then you have to consider other players. Will Tyler Bozak be dealt after all the rumors in the offseason? He’s certainly proven he doesn’t need Phil Kessel. Is this the year Joffrey Lupul will get traded? Could they find a taker for Dion Phaneuf’s contract, or at least part of it? What about the Leafs’ other goalie, Jonathan Bernier? He’s played much better in the last month, raising his trade value much higher than it was at the beginning of the season.

The biggest reason the Maple Leafs should start trading players now is that, well, they’re doing too well. It’s all well and good for the Leafs to put forth good efforts, but they are winning far too many games. There are some people even talking about them making the playoffs. It seems that the plan to build for the future has been forgotten by many. It is not going to do much for the Leafs to make the playoffs this season or even come close? What if the Leafs make the playoffs in the final wild card and the Pittsburgh Penguins are only one point behind and miss? The Leafs would have essentially cost themselves an extra first-round pick in the 2016 Draft.

The fact that anyone has brought up playoffs when it comes to the Maple Leafs is just plain lunacy. This is what is wrong with the Toronto sports landscape. Everyone has been screaming for a rebuild for years. This year, they finally pulled the trigger. Now, all of a sudden the Leafs are doing well and it’s like, “Oh, the Leafs are just five points out of the playoffs. They should make a run for it.”

The second half of the season should be about acquiring new assets and seeing what some of their prospects can do with the big club. It should not be about making a push for the playoffs. They might only need this year depending on who they pick in the draft. If they win the lottery and pick Auston Matthews, you can fairly assume that the Leafs will be pushing for the playoffs as soon as next year. That would be fine, just not this year.