Was the Oilers’ decision to keep Leon Draisaitl in the NHL for the entire season a good choice?

This is certainly a tough question to answer, especially so given the fact the we are only a quarter of the way through the 2014-15 NHL season.

At the Time of the Decision 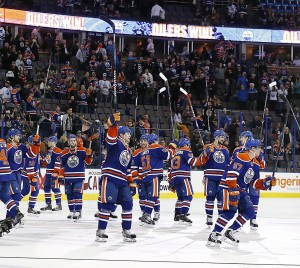 On Monday, October the 27th, Leon Draisaitl was informed that he would remain in the NHL for the season. The Oilers decision to keep the young center, ironically enough, came on Leon’s 19th birthday, a decision which ultimately placed another young forward into an already largely inexperienced lineup.

At the time, the Oilers were in the midst of an inspiring four game winning streak, a run which had brought their overall record to 4-4-1. For the Oilers and their fans, it appeared, although early, that this just may be the season in which Edmonton would finally be successful.

From a managerial perspective however, the decision to keep Leon was likely already made the minute the Oilers drafted Draisaitl with the third overall pick in the 2014 NHL Entry Draft. At 6 foot 1, 210 pounds, the native of Cologne, Germany appeared ready to step off of the draft stage and right into NHL success. The Oilers, who were extremely thin down the center of the ice at the time (and still are), needed a player with size and skill to fill the vacant second line center position.

Draisaitl hadn’t been playing exceptional hockey, which is to be expected from a 19 year old NHL rookie. In his first nine games, Leon had scored one goal and two assists, was a -4 rating and was averaging a little over 13 minutes a game. This level of production from a second line NHL center is less than impressive, however Leon at the time was, and still is the best second line center option for the Oilers.

Since the decision to keep Leon Draisaitl, the Oilers have a 2-10-1 record and have been the worst team in the NHL. The faint glimmer of hope at the time of the decision has long since faded, and the Oilers appear to be destined for a similar, unsuccessful fate this season.

In no way is this attributable to Leon alone. This point must be made extremely clear.

In Draisaitl’s 13 games since that memorable birthday, playing in the NHL has been anything but. Individually, Leon’s game seems to have regressed, having only scored one goal and one assist. A -6 rating, Draisaitl’s average ice time has slipped to a little over 11 minutes per game during that span, while his work in the faceoff circle needs significant improvement.

Obviously any rookie in the NHL, especially one who is only 19 years old, will endure a huge learning curve, and Leon is no different. So far this season, Oilers fans have seen both glimmers of the player Draisaitl will one day be, as well as of the understandable difficulties of being a rookie in the NHL.

Was it the Right Decision?

Given we are only a quarter of the way through the season, this is a tough question to successfully answer.

Personally however, I believe that keeping Draisaitl in the NHL was the right decision. If he was sent back to the Prince Albert Raiders of the Western Hockey League, I don’t think that the quality of competition Leon would face would ultimately increase his abilities as a hockey player.

Leon scored 38 goals and 67 assists in 64 games in the WHL last season, and was clearly superior to his competitors physically, mentally and skill wise. The skill level of the American Hockey League likely would have been the best option for Leon’s development, however he is not eligible to play with the Oklahoma City Barons.

Although the jump to the NHL for Draisaitl, like any rookie, is an exponential increase in quality of competition and difficulty, it seems to be the right decision for his development. Although Leon has had his struggles this season, this is largely a result of entering the NHL as a second line center and being forced to go up against veteran NHL centers and established, more experienced players.

Ideally Leon would have been best suited for a third line role, which has often become the case this season. However, due to the Oilers inability to upgrade at the center ice position, Draisaitl has been forced into a role with high expectations, not exactly ideal for a 19 year old NHL rookie.

Were the Oilers Right in Keeping Draisaitl in the NHL? Post your Opinion Below!