Yesterday it was officially announced that Lindy Ruff and Darcy Regier would both be returning as coach and GM of the Buffalo Sabres for next season. Fans had little doubt that the longest serving duo would be back next season but at the same time, were hoping for a change behind the bench.

Darcy Regier earned one more season after the miracles he pulled off at the Trade Deadline; Getting a first round pick for Paul Gaustad, and snatching Cody Hodgson and the surprising Alex Sulzer away from the Canucks, while just giving up Zach Kassian and Marc-Andre Gragnani. The Sabres were the winners of the deadline deals (despite missing the playoffs) as Hodgson will have a better upside for the Sabres, becoming their number 1 center in the future. Despite not being able to get rid of Derek Roy, the deadline deals were a huge success and will pay out in the near future, the Sabres should find themselves back in the 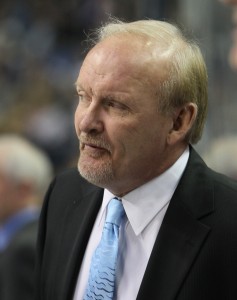 But what has Lindy Ruff done for the Sabres?

Now in order to fully understand Ruff’s role with the Sabres and whether it’s been successful or not, you have to compare it with another coach who has coached their team for the same amount of time. But due to the fact no other NHL club in its right mind would keep a coach this long, you have to look at the NBA in order to draw comparisons!

Greg Popovich has been the head coach of the San Antonia Spurs for 16 seasons, that’s a very long time to be a head coach but Popovich has more results to his name than Ruff. Popovich has lead the Spurs to the playoffs 15 out of 16 seasons and has 4 championships, while Ruff has never, and likely never will lead the Sabres to a Stanley Cup!

What this means for the Sabres

Giving Ruff a vote of confidence, means Ted Black, Terry Pegula, and Darcy Regier have decided they will be trading away players (like Derek Roy) who have problems with Ruff instead of fixing the root of the problem. If fans had any doubt about Derek Roy’s future with the club after his comments Monday, it’s almost a foregone conclusion now he will not be with the Sabres to start next season!

Players having issues with Ruff, better put them aside and just play hockey as the ownership of the Sabres is clearly backing the coach. It’s a backward system considering how other teams around the league just get rid of their coaches (Washington, Toronto, Montreal) so in that regard, props to the Sabres for sticking it out with their head coach and not letting the players win this battle!

That being said, it’s time for a new coach in Buffalo. The players and fans are becoming complacent and happy with the team’s poor performance, Ruff is too

comfortable and knows he can do no wrong as he keeps being brought back season after season. 16 seasons is far too long for any coach, heck, 10 is too long for a coach let alone 16. Coaches get comfortable and after a while the players just tune them out and they become irrelevant to their players causing things like 12 game road losing streaks to happen.

Lindy Ruff may be a good coach, a nice guy and respected around the league, but he is not a winner — the numbers don’t lie! The players are sick of losing under him, it’s time for a change in Buffalo, but fans will have to wait at least another year to see another coach behind the Sabres bench.

3 thoughts on “Lindy Ruff returning: What does that mean for the Sabres?”