The Los Angeles Kings are so intent upon returning to the Finals for the first time since the Gretzky era, they’ve decided to bring him back — at least in the duds he donned.

The team’s uniforms are undergoing a major rebranding, harkening back to the late-80s/late ’90s black, silver and white design.  The Kings wore a variant of that scheme as alternate jerseys in each of the past two seasons.  Coincidentally or otherwise, the team’s only trip to the Stanley Cup finals occurred during the Gretzky-led 1992-93 season, squarely in the middle of that era.  The Kings made the playoffs five consecutive years during that period, a team record for a franchise that has generally struggled during its history.  Los Angeles has missed the playoffs 20 times in 44 overall campaigns since the team’s inception in 1967.

Explaining the change, Kings President of Business Operations Luc Robitaille said, “There was an

overwhelming sentiment from our fans and from our players that has led us to this change.  Our fans really like the late ’80s and early ’90s era Kings uniforms which are very similar to this uniform.  As a player, the colors give you an attitude and an edge.”

The general sentiment over at the Kings’ official online fan community site LetsGoKings.com, on the other hand, was significantly less positive.  Posters debated the merits of the primary color changes, the “home plate” logo design, the diminutive size of the crown and the lack of purple in the primary home and away uniforms.  On balance, the fans seemed to generally prefer the throwback jersey re-introduced in 2010-11.  That 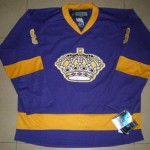 uniform, which featured a purple-and-gold design (longtime Kings fans know it as “Forum Blue and Gold”), was worn several times last season.  Although a vocal contingent of fans called for the new sweater to be elevated to the team’s primary version in 2011-12, it will remain the throwback jersey this season.

The shield emblem now displayed on the primary home jersey will likewise become the team’s featured logo, with the previous crown design relegated to secondary status with one significant change:  the crown will be black and silver only, with no further usage of the color purple.  Purple will only be seen in the throwback jersey and in the club’s third jersey, which will be the team’s former primary uniforms from last season and previous campaigns going back to 2002.

Although Kings’ management publicly cited fan sentiment as a primary driver in the switch, other factors appear to have played a role as well.  Discussing the process by which the team went through

in making the change, Kings Chief Operating Officer Chris McGowan said, “You want the players being comfortable with what they’re wearing, and you want them to like what they’re wearing.  They didn’t dislike our old jerseys, they just simply liked the alternates better.  Then we started showing them mock-ups of what a reverse, a white version, of that would look like.  We did the camera tests and the designing of it.  You could just see it in their eyes, that that’s the one they want to wear primarily.  They definitely played a part in the decision.  When you make an organizational change like that, you want to make sure you’re talking to as many people as possible.  So we were bringing focus groups in with fans, getting their feedback.  We got our players’ feedback, obviously.  We got our ownership group’s feedback.  We got the NHL’s feedback.  We got Reebok’s feedback . You gets tons and tons of feedback, to make sure that the decision you think you’re making is the right one.  Organizationally, we feel really good about the black, white and silver direction that we’re going

An unspoken consideration might have also been science.  Studies have shown that teams wearing black uniforms tend to play more aggressively than teams in other colors.  Given Terry Murray’s emphasis on toughness, net presence, physicality and a defense-first approach to the game, it would seem entirely feasible that at least a small percentage of the decision was based upon the probability that black likely will bring out a more aggressive element in game play.

Lastly, don’t discount superstition.  Sports begets superstitious rituals (playoff beards, for example), and given Los Angeles’ lone Gretzky-led window of previous playoff success, skating up and down the ice in the same colors the Great One wore may have “throwback” appeal in its own right.

So when the puck drops on the 2011-12 season, don’t be surprised when a black freight train smashes hapless opponent into the boards with renewed vigor.  That will be Dustin Brown, energized to a fervor in his black uniform.  Let’s hope he doesn’t try to stickhandle like the Great One used to, as well.  Oh wait — too late.