For the first time since 2013, the Toronto Maple Leafs are on the verge of clinching a spot in the NHL’s postseason. To do it though, they will need a number of things to go their way on Tuesday.

With Leafs Nation hanging in the wind waiting for that ‘x’ to show up next to their team’s name in the official standings, the Leafs are preparing to take on the Washington Capitals – a team locked and loaded in their playoff preparation.

With three spots still technically up for grabs in the East, the Leafs will be looking to change that when they take to the ice on Tuesday – leaving the Bruins, Senators and Lightning to fight for the final two spots.

That being said, here’s how it can all unfold.

Leafs Not Alone in Seeking Clincher

The Maple Leafs are 8-1-1 in their last 10 games. They’ve won their last four games and seem to be finding their way over the last stretch of the season. They’ve managed to climb into the second seed in the Atlantic Division – ahead of a struggling Ottawa team – and with four games left could be looking at home-ice advantage in the first round.

William Nylander will be looking to maintain his success as the Leafs head towards the playoffs. (Tom Szczerbowski-USA TODAY Sports)

The Capitals, though, will also be looking to clinch top spot in the Eastern Conference on Tuesday – which would lock up home ice for them throughout the NHL postseason.

On top of those two clubs, the Boston Bruins are also looking to punch their ticket to the playoffs which would also deal a huge blow to the Lightning’s playoff chances.

So here’s how the cards need to fall for both the Leafs and the Bruins to secure their spots.

That being said, they will need help from the team that ousted them in 2013. The Bruins are set to take on the Lightning in a matchup on Tuesday filled with playoff implications.

The Bruins can help Toronto and their own cause with a regulation win over the Lightning. The win would give the Bruins 94 points and ownership of the possible tiebreaker (wins in regulation and overtime) if it came to that.

For just the second time in NHL history, three rookies on the same team have hit the 60-point plateau. Auston Matthews (67), William Nylander (60) and Mitch Marner (60) have all hit the mark with Matthews leading the way in goals as well with 39. 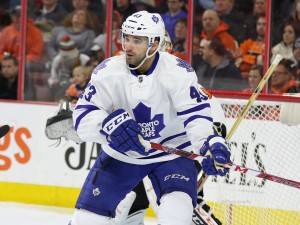 It’s been a career year for Nazem Kadri, who has reached the 30-goal plateau and 60-point mark this season. (<ahref=”https: www.facebook.com=”” 38photography”=””>Amy Irvin / The Hockey Writers)

Nazem Kadri has also had a breakout season with 31 goals and 60 points of his own. His prior career bests coming in 2013-14 when he scored 20 goals and 50 points. But it doesn’t end there.

Regardless of how you look at it, the 2016-17 season has been a successful one for a team that was supposed to be in the midst of a multi-year rebuild. With the playoffs just on the horizon and the leaders of the team under the age of 20, there is no question that this team is on the verge of success.