Last night in a pre-season game between the Maple Leafs and Sabres, while I was enjoying my weekly fix of “Breaking Bad”, a line-brawl took place at the ACC. Over 200 penalty minutes were given out in one stoppage thanks to seven fights, more than 10 misconducts, and one match penalty (given for intent to injure). All in all it was pretty ugly, especially with how it all started. Below is a clip of the brawl.

So, What the Heck Happened? 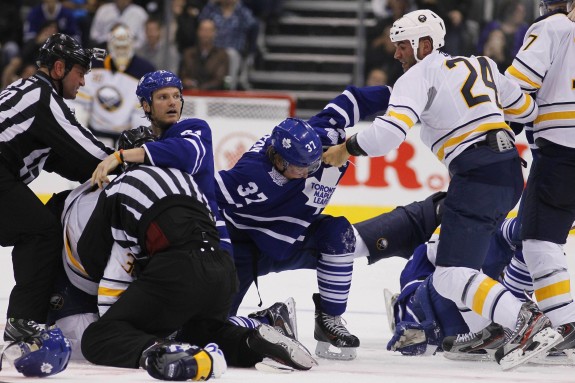 The entire encounter began when Devane, who stands 6-foot-5 and weighs 217 pounds, dropped the gloves with Tropp, who is a tad slimmer at 6-feet and 185 pounds (this happened before the above video clip). Clearly, this didn’t go well for Tropp, who’s helmet fell off during the fight just before he was knocked out. This resulted in his head hitting the ice. It was not a pleasant site watching him struggle to his feet even with help from the trainer and his teammates, and then have the ice crew clean up the blood on the ice. I hope Tropp has a speedy recovery.

Hope Tropp is OK. He was clearly KOed. That's obviously why BUF was upset. TOR says Tropp started fight out of his weight class with Devane.

As Bob McKenzie points out, this angered the Sabres, who responded to the incident in a rather stupid way.

After the TV timeout, John Scott (6-foot-8, 270), blatantly went after Phil Kessel. He dropped the gloves with someone who had absolutely no intention of engaging, which is weird because Kessel had absolutely nothing to do with the Tropp incident. Now, Kessel responded in his own immature way with multiple hacks to the back of the legs, and this was the match penalty that was given. Slashes as forceful as the ones Kessel gave (ones that clearly were intended to hurt), don’t belong in the game. You can see in the video that Kessel keeps delivering shots after Scott is down on the ice.

But, what was Kessel supposed to do? The biggest goon on the Sabres went after the best player on the Leafs because he thought a teammate of his had been unfairly outmatched in a fight. Does that really make sense? If Scott was seeking retribution for what happened to Tropp, why not go after Devane later in the game? The other thing is that it’s pretty clear Tropp was willing to fight Devane.

I've seen some people say Devane shouldn't have fought Tropp. Who started the fight though? http://t.co/vMA7F05WmW

As the video shows, Tropp certainly engaged in the scrum but still Scott went out and did something quite reckless and stupid. Kessel was stupid to hack him back but it was either that, turtle, or get beaten silly. The first hack or two I’m fine with but it’s the subsequent ones afterwards once Scott was down that I am at issue with.

What’s the best part about the brawl? How about the fact this really could have been avoided because Toronto is the home team and has last change. Why is Kessel out on the ice with no protection against Scott? The other Leafs on the ice at the time were Bozak, Ashton, Brennan and MacWilliam. Not the toughest bunch, to say the least. The second that Carlyle sees Scott get sent out, why would you send out Kessel?

Mark Masters explanation from Randy Carlyle above doesn’t make much sense to me. The worst part of it all is that it will end up costing the Leafs.

Let the debate begin: Should David Clarkson have left the bench, risking a 10-game suspension, to save Phil Kessel from John Scott?

Leaving the bench to take part in a fight is an automatic 10 game suspension, in the regular season. For those of you keeping track, that means Clarkson won’t play his first regular season game as a Maple Leaf until October 25th versus the Blue Jackets. The fact is, Clarkson hopping the bench to defend his star teammate was not the smartest thing to do, but it was in the heat of the moment and purely reactionary. There was relatively nobody else on the ice to protect Kessel.

However it also does appear that when Clarkson comes on Scott is already at the bottom of a pile of players. It appears that Clarkson is more eager to send a message to Scott, one that I feel certainly needed to be delivered. Is sending a message worth sitting out for 10 games? Hardly, though in the heat of the moment Clarkson didn’t have time to think about consequences.

To Recap the Brawl

One ugly fight between people in different weight classes. One angry John Scott. One defenceless Kessel, who then gets really angry himself and mayhem ensues. One player hopping the bench to defend his star in the midst of the mayhem. One goalie fight. All in all, one damn entertaining brawl.

If there is any good to come out of this (other than sheer entertainment) I’d say it is twofold. Firstly, Clarkson made it clear that nobody is to mess with his teammates. I like that. I like his attitude of sticking up for his teammates, and though the circumstances were certainly questionable, the message he sent is a good one. On a side note, props to T.J. Brennan, who is the first one to come to Kessel’s aid.

Secondly is the attitude of Jonathan Bernier. For those who watched the entire video, you probably enjoyed the goalie fight between Bernier and Miller. Bernier more than held his own and certainly got the Leafs fans on his side, when this might not have been the case a few weeks ago, as many questioned his arrival in the first place. Not only did he make a statement to the fans, but also to his coach. Carlyle likes the rough and tumble and to see his goaltender so willing to take matters into his own hands should bode well for the Leafs netminder. 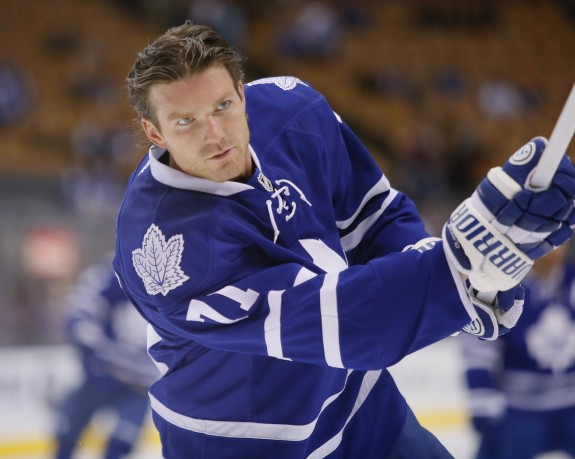 Clarkson sits 10 games for jumping the bench. Not good. Who will fill in for him in the top-six? Mason Raymond seems a logical candidate but remember he doesn’t even have a contract yet. Fitting Raymond and Franson under the cap (less than $2 million) seems more doubtful by the day.

Kessel also is automatically suspended 1 regular season game for his match penalty. It could be more but I doubt it.

Tropp’s head injury was also certainly ugly but that leads to a different debate about head injuries in fights. The ugly this time goes to the lack of class from players on both teams.

Here’s to looking forward to November 15th, the next time these two teams meet!