It feels like the NHL has hated fun for a long time. It’s a battle that has rights holders walking lock-step with the league because most of the talking heads are ex-NHLers in one fashion or another. The latest installment of painstakingly teasing the fun out of the game features Mike Milbury calling P.K. Subban “a clown” for dancing a little during warm-ups Friday. (Watch the video at SB Nation.)

Here’s the full quote from Milbury on the NBC broadcast.

P.K. has got a tremendous personality and sometimes you got to keep it under control. This worries me. I know it’s a new day and age and everybody wants to be on Instagram or Twitter or whatever. But you got to keep focus. This is a tough game. When I see this I start to think maybe (Predators head coach) Peter Laviolette ought to give him a rap on the head and say, ‘Hey P.K., we got a game tonight, focus in, you don’t need to be a clown out there. And he will. He’s been a clown in the past and we’ve seen him act like a clown. When he’s serious and focused he’s one hell of a player.

This call for “control” comes from a man who has notoriously been unrestrained during his career in hockey and broadcasting (something that has occasionally made him more entertaining). It’s a ridiculous take. To worry about Subban’s modest head bobbing and suggest coach Laviolette needs to give Subban a “rap on the head” is laughable. Only, don’t laugh. You might be labeled a clown.

Milbury is talking about a player who carried the Predator’s water during Game 1. Subban has been an outstanding contributor for a team that is 5-1 in the postseason.

Additionally, Subban didn’t exactly drop to the ice and start breakdancing. No one should assume Milbury is a dancing aficionado, but it’s possible he’s never seen dancing. Most of Subban’s dancing is just bobbing his head. If you read the quote before you see the video, it’s shocking to discover how little dancing took place. 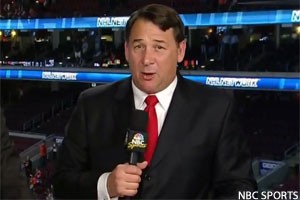 Milbury’s stance is emblematic of the NHL’s ongoing hatred of fun. Fans are dragging the league kicking and screaming toward entertainment. Fans, for the most part, understand this isn’t politics. This is entertainment. It’s allowed to be fun. Fans want to see salary cap numbers and to get all the grisly details on the expansion draft. The league has denied these desires or has to have its hand forced before it will acknowledge them.

Why is fun a bad thing? There’s an unspoken and widely accepted rule in hockey that fun is bad. Or if fun isn’t bad, it’s maximized by having a stern face and doing things for the good of the team. Despite the NHL’s best efforts, hockey is fun as hell. Why is there a concerted effort to make it somber and serious?

There’s not a good explanation for why fun can’t be had. Does it disrespect the game? It’s a game. To some extent, even Don Cherry gets it. He’s full of hot takes, but he’s also fine with the game and broadcasts having a sense of humor.

Whatever you think of Subban the player, Subban the person is genuine. His actions have shown in the past that, at least to some extent, he understands this is entertainment. It’s okay to have fun. If that offends you on a personal level, that’s okay. You’re allowed to feel that way. You can cheer for a different team. However, there’s no reason broadcasters need to don a badge and serve as the NHL’s fun police.

To boot, it’s not as though warm-ups are a sacred event where players never screw around. This happens all the time.

Singling out Subban feels as though it’s targeting a player because he’s outspoken and willing to have a personality in a league that has woefully few fun personalities.

There wasn’t any intermission bashing of Mats Zuccarello during Saturday’s broadcast. There were no calls for him to get his head in the game. There were no words spilled about how Alain Vigneault ought to be worried about this scene or how he ought to give Zuccarello a rap on the head.

I’m not sure the Rangers know what sport they’re playing today pic.twitter.com/USeOwLwxf6

It’s not about disagreeing with a commentator. Disagreement is good and it often makes for quality, entertaining TV. Nothing would be more boring than a broadcast full of commentators who agreed with each other and thought the exact same thing as you.

However, it’d behoove Milbury and other commentators to have a healthy sense of perspective. Hockey is great and there are serious aspects to it. Players absolutely take championships and their jobs seriously, but it’s a game. It’s a television event. It’s entertainment and it won’t break under the tremendous weight of a player bobbing their head, celebrating intensely after a big goal, or — gasp — smiling. Stripping the entertainment from entertainment doesn’t make it holy. It just makes it less entertaining.