Plummeting down the standings with 10 losses in the last 11 games. Sound familiar Minnesota Wild fans?

Of course it does, you’ve seen this before. Yes the Wild again find themselves desperately grasping for any semblance of hope as another season works to slip away from Minnesota. It’s a movie we’re all tired of seeing, but somehow our morbid curiosity often has us coming back for more. In the first of a three-part series, we’ll examine the parties responsible for the latest calamity of a Wild season.

Mike Yeo is in his fifth season coaching in Minnesota and each year has been marred by the types of long losing streaks that threaten to derail teams’ seasons. In fairness to Yeo, each season has seen it’s fair share of anomalies that have been at least partially to blame. This season’s version of the Minnesota Wild have no excuses for the losing streak though.

The team has the full complement of skaters, an all-star goaltender in the nets, and no apparent distractions outside of its own futility-driven “confidence issues”.

The Wild’s roster has seen significant overhaul since Yeo’s first season in Minnesota with only five players remaining from the 2011-12 team. Yet, the narrative has remained largely the same: Get out to a hot start, fall off a cliff in the middle, then do just enough to sneak into the playoffs and lose to Chicago.

And if the Wild’s seasons have been movies, Mike Yeo has been the director. 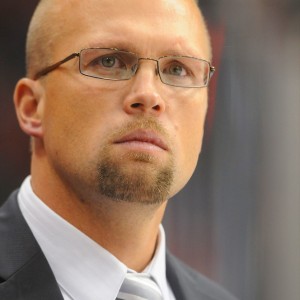 Mike Yeo is in his fifth season as the Wild’s head coach and has yet to reach the Western Conference Finals despite a talent rich roster. (Vincent Muzik/Icon SMI)

Yeo has proven that his system can be used to win games at the NHL level, it’s essentially the same system Dan Bylsma used in Pittsburgh when the Penguins won a Stanley Cup in 2009, the same year Yeo was assistant coach on Bylsma’s staff. More to the point, the Wild have shown they can win with it too, if only periodically.

Minnesota’s problem is consistent inconsistency. No matter what, this team under Yeo has never put together a full season. All teams experience bouts of losing where they can’t seem to catch a break. But they’re usually four, five, maybe sometimes even six game streaks. And in a league with so much parity where teams are packed into the standings tighter than a can of sardines, even those minute losing streaks can cost a team invaluable playoff positions. The Wild take losing to new heights though as demonstrated by the current 3-10-3 streak they are on.

Yeo’s biggest failure has been his apparent inability to seriously cultivate the talent that many of the young players on the team were supposed to have. Mikael Granlund has been largely disappointing and certainly not the number one center he was touted to be, Nino Niederreiter and Jason Zucker have flashed talent but have been mostly inconsistent and unreliable, Erik Haula seemed to break out in the 2014 playoffs but has since been relegated to a fourth line role. Defensively, top draft pick Jonas Brodin has still yet to develop any real offensive presence and while it is far to early to judge Matt Dumba conclusively, he has also been inconsistent.

Part of the reason Yeo was hired directly from the Wild’s AHL affiliate — the then Houston Aeros — was that he allegedly had a propensity for developing young talent. He has not done that in Minnesota yet and most of the Wild’s ultra-hyped prospects has not lived up to expectations, a major reason the Wild haven’t taken any real steps towards a championship in some time. Yeo is partially responsible for that.

He’s also responsible for the fact that he can’t seem to get the most out of his players when it really matters, a trait that I’d venture to guess has been possessed by almost every great coach in history, regardless of sport.

For one reason or another, Yeo has failed to direct his players to a consistently competitive level of play for 82 games, let alone a championship caliber level. Five years into his regime and the Wild still has failed to live up to expectations. The Minnesota Wild are like a movie flopping at the box office right now; part of the blame for that goes to Mike Yeo.