The second book in my year long quest to read and review one hockey book a month is The Boys of Winter: The Untold Story of a Coach, a Dream, and the 1980 U.S. Olympic Hockey Team by Wayne Coffey. I chose this book because this month the nation celebrated the 35th anniversary of the “Miracle on Ice” where the United States Olympic hockey team defeated the world dominating Soviets in the 1980 Olympics. Coffey begins his book with the funeral of Herb Brooks held on August 16, 2003. He labels the Prologue “The Last Reunion” as this was only the second, and now the last, time that the 1980 U.S. Olympic hockey would be united.  Coffey works from this funeral to weave a terrific story that juxtapositions the events leading up to 1980 Olympics with the personal stories of the coaches and players that were a part of that miracle team. This framework provides an amazingly insightful and highly detailed account of one of America’s most enduring Olympic and hockey memories.

Coffey begins the first “period” of his book with the puck drop of the 1980 Olympic U.S. vs. Soviet matchup. From there he continuously weaves in and out of the game providing backstory of the teams and players before the 1980 Olympics. Some of his most interesting sections are when he discusses the coaching style and approach that Herb Brooks had not just towards the 1980 Olympics, but towards hockey in general. Coffey portrays Brooks as a meticulous coach who is credited with nothing less than manufacturing this miracle. Coffey notes that Brooks changed the U.S. hockey teams dynamics and style prior to the 1980 Olympics, that he continuously studied film, asked Soviet coaches questions and had a hand in the Olympic scheduling, which made sure, if the games went like he thought they would, that the Americans would play the Russians.

Through all these activities Brooks still had to coach and find a way to unify a group of young men, who had noted animosity towards each other. Brooks found a way to unify his team by making himself the enemy which according to Coffey created “a shared disdain for his ceaselessly demanding and Machiavellian ways [which were a] rallying cry, the reason guys would want to go out on the ice and bust their tails, just to show him.” However, Coffey also reminds his reader, time and again, that Brooks did this for his team to win, not for his personal enjoyment or pleasure and as Coffey notes, Brooks “would later call it his loneliest year in hockey.”

Beyond the backstories and personal biographies Coffey breaks down the game in nearly minute by minute detail, which while at times can be a little difficult to follow, it still provides the fullest account of one hockey game that any writer can wish to achieve. One of his most captivating sections in which he breaks down the actual “Miracle on Ice” game is his description of Mark Johnson’s goal at the very end of the first period (1:54 mark of video below).

Coffey paints a vivid description of how and why Johnson broke through the  Russian defenseman and how that led to this all important goal. For Coffey this was the goal that changed the entire direction and therefore outcome of the game. Coffey states that by the end of the first period the United States “had been outplayed, but the score was tied, the charge of Johnson’s goal flowing through them like a current.” While for the Russians Johnson’s goal led Russian coach Viktor Tikhonov to panic and as he directed his anger at Vladislav Tretiak, who was probably the most famous and decorated goaltender of the time, he made what he himself later called “the biggest mistake” of his career in replacing Tretiak with backup goaltender Vladimir Myshkin. The Americans were stunned by this decision, but more importantly so were the Soviets and the entire dynamic of the game changed with this one goal.

Coffey uses this framework in the last two “periods” of his work and provides outstanding details and factoids for the readers. One final interesting note on Coffey’s work, I will keep the suspense of the book intact for those of you wishing to read this well researched and written book, is that even with their loss to the Americans the Soviets still had a chance to win the gold medal, something few readers may have been aware of prior to picking up Coffey’s book. Coffey writes that “If the Americans beat Finland, the gold medal was assured for the Americans. But if the Americans lost to Finland and the Soviets beat Sweden, the Soviets would win the gold, the United States the bronze.” If that happened one wonders if the “Miracle on Ice” would have such a resounding presence in the American Olympic and hockey memory. 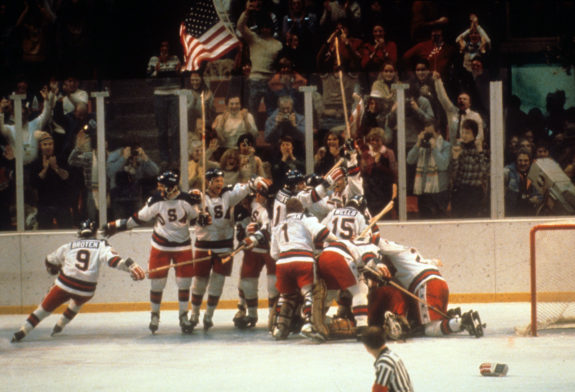 LAKE PLACID, NY – FEBRUARY 22: Team USA celebrates after defeating the Soviet Union to advance to the Gold Medal game during the 1980 Olympic Games on February 22, 1980 at the Olympic Center in Lake Placid, New York. (Photo by B Bennett/Getty Images)

There have been quite a few works on the “Miracle on Ice” game and for those you wondering where to start I suggest the following order. Watch Disney’s Miracle first to get a basic understanding of the events, then read Boys of Winter which will fill in tremendous gaps and provide such intricate details to better your understanding of the coaches, players and the game itself. Lastly, I suggest watching the ESPN’s 30 for 30 documentary Of Miracles And Men which will round out your understanding of the event with an intimate look for the Russian perspective of the game. Either way you do it, all hockey fans should spend some time with this outstanding book.