8-of-11 — correct matches to open the first round.

9-of-91 — correct matches through three rounds.

70-of-91 — correct prospects through three rounds. 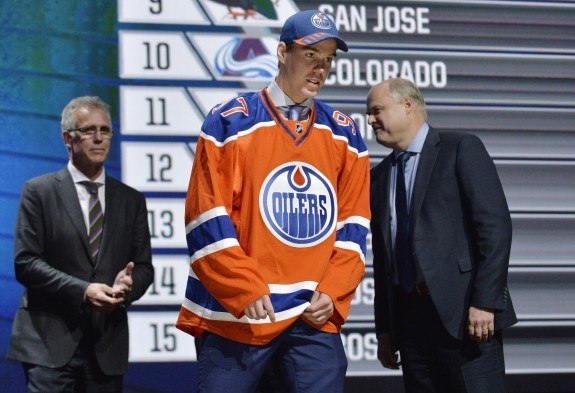 (Steve Mitchell-USA TODAY Sports)
Unlike in years past, the first two picks were slam dunks for everybody’s mock draft as it was well known in advance that the Edmonton Oilers would use the first overall selection on Connor McDavid, above, and that the Buffalo Sabres would follow with Jack Eichel at second overall. But starting with the third pick, all bets were off and mocks varied greatly.

The best, or sometimes worst, part of making a mock draft is looking back on it — facing the music following the actual draft.

Through 11 picks of the first round, I was pretty proud of my efforts, having already eclipsed my previous record of matching players to teams with eight perfect picks. I was 11-for-11 in terms of prospects getting selected and nailed the top six in order — Connor McDavid (Edmonton), Jack Eichel (Buffalo), Dylan Strome (Arizona), Mitch Marner (Toronto), Noah Hanifin (Carolina) and Pavel Zacha (New Jersey) — plus Timo Meier (San Jose, 8th) and Lawson Crouse (Florida, 11th). That topped the six matches I had in 2014, five in 2013 and only one in 2012, which was my inaugural mock.

I knew this year’s mock was likely going to go sideways at the 12th pick, as I had a hunch that the Dallas Stars would defy the consensus rankings. I was right, but I had them taking Oliver Kylington rather than Denis Gurianov. Either way, it was a reach, but Kylington surprisingly plummeted all the way to 60th overall (Calgary), so that was my biggest blemish. I did have Gurianov as the first Russian forward in my mock, ahead of Evgeny Svechnikov, who most favoured, so that was a plus.

Nobody predicted Don Sweeney’s bizarre wheeling and dealing that resulted in three straight picks for the Boston Bruins from 13th to 15th. And Sweeney really shook up the draft by taking Jake DeBrusk (14th) and Zach Senyshyn (15th) sooner than any mocks I’ve seen.

I took a lot of flack for making Mathew Barzal a faller — I had him at 13th to Los Angeles — but he dropped even further to 16th (New York Islanders). Sure, he could be a huge steal in that spot and perhaps New Jersey was considering him at sixth if the Devils didn’t take Zacha, but my spidey senses picked up on Barzal’s potential to slip down the draft board.

The rest of the first round wasn’t very flattering for my mock and I finished only 22-of-30 — my worst showing to date after steadily improving from 25 to 26 to 27 over the previous three years. So that part was disappointing and put a bit of a damper on my early success.

The following is a list of my first-round misses and where they wound up going:

This is a list of players who actually went in the first round and where I had them going:

As you can see, I had the right team for Carlsson, just the wrong pick number.

In the second and third rounds, I was hit-and-miss throughout, with my only bang-on selection being Graham Knott to Chicago at 54th, bringing that total to nine overall. I nearly got another one right for the Blackhawks to close it out at 91st, but I decided to go with goaltender Adin Hill over Chicago’s actual pick of defenceman Dennis Gilbert, who I had debated on but ultimately ranked 92nd.

I finished 70-of-91, meaning I missed on 21. Five of those 21 were narrow misses — and still in my top 100 rankings — meaning only 16 prospects picked through three rounds weren’t on my list at all. If you extend that to the top 100 actual picks, I again had 21 omissions.

Of that group, my only real regret is leaving out Lauzon, a guy I had in mind as a sleeper and probably would have ranked in my top 105. The Greer pick came out of left field for me and I haven’t yet warmed up to it — at least not as a top 40 — but I’m quite intrigued by the selections of Dzierkals, Saarijarvi, Vejdemo and Lindgren. I look forward to tracking the development of that foursome, with the first two possibly coming to North America next season after getting picked in the CHL Import Draft on Tuesday — Saarijarvi went ninth overall to the OHL’s Flint Firebirds and Dzierkals went 22nd to the QMJHL’s Rouyn-Noranda Huskies.

On the other hand, these are the 21 players I included in my mock that didn’t end up going within the top 100:

It’s stunning, really, how far some of those guys fell, including the four prospects from my top 100 that went undrafted through 211 selections. Aho and Tkachev were undersized Europeans who were previously passed over in 2014, but I figured their chances of getting picked this time around were pretty good. Soy and Noel were even better bets to be selected, so it was strange not to hear their names called. It wouldn’t be surprising to see either or both of them sign somewhere as free agents before the end of summer, with Soy attending Edmonton’s rookie camp and Noel doing the same with Anaheim.

Oddly, Nashville picked a centre by the name of Tyler Moy, which I assumed was a typo at the time, but such a player does exist and was taken over Soy.

Worth noting, I was on the right track on a few other fronts too. I assumed Pittsburgh would take a high-risk, high-reward winger with its first pick and the Penguins did just that by scooping up Sprong (I had Beauvillier).

Don’t ask why, but I felt Mitchell Stephens and Matthew Spencer would end up getting picked by the same team and I even got the state right, but it was Tampa Bay taking both rather than Florida.

Ditto for Swedish defencemen Kylington and Rasmus Andersson, who I had going to Dallas. Both went to Calgary, but in reverse order with Andersson getting picked seven spots ahead of Kylington (53rd to 60th).

Along those same lines, I had Korostelev and Travis Dermott to Tampa Bay — at 44th and 64th, respectively — but Toronto selected Dermott at 34th and then Korostelev way down in the seventh round.

All in all, it was another enjoyable experience and now it’s time to turn the page to the 2016 draft and get up to speed on those prospects, including Auston Matthews, the highly touted American forward who might play pro in Switzerland this coming season and is the consensus top pick as of today.