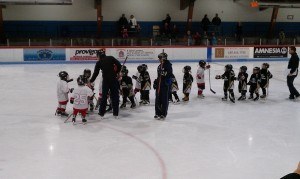 “I am the youngest of four. I have two sisters and one brother. I am the youngest by fourteen years. My brother likes to watch Wayne’s World and my sisters like basketball and art. My mom has big hair and my Dad loves hockey and the Toronto Maple Leafs.”

Everyone has memories of their childhood- good, bad, funny, sad. When I look back on my early years I can’t help but smile, I was loved and I knew it. The quote above is taken from my grade one class profile. I don’t remember writing it but looking back now, I remember two things that were synonymous with my youth: hockey and the Toronto Maple Leafs. Two things that are also undoubtedly tied to my father, Larry (Lars) Shields. My Hockey Dad.

I grew up in River Heights and was instructed as a child that I would play hockey and cheer for the Toronto Maple Leafs. My dad would be my first instructor, my first coach and my first critic- just like he was to my brother, David, before me. I would watch the likes of Wendel Clark and Doug Gilmour on Saturday nights with my dad as he pointed out Clark’s toughness and Gilmour’s vision. I would go to public skating with promises of a Slushie and popcorn, two things my dad used as a vehicle to grow my skill and love for the game. My Hockey Dad.

As I grew older, my dad would voice his opinion on my play- for better or for worse. We had arguments followed by quiet car rides followed by apologies. He would watch me win and lose; sweat and bleed; cry and laugh. “This is the greatest game on earth and it lasts a lifetime- I want you to have no regrets and be able to play it with a group of guys until you’re 60”, Larry would say and at the time…I didn’t understand. I didn’t understand his love, his drive or his obsession for the game. It was a game. But for my dad, it was a game and a life he almost never had. My Hockey Dad.

My dad played hockey and football growing up on the fields and rinks of Wildwood Park. He would eventually have to choose between the two sports, going on to play football for the Fort Garry Lions and the University of Manitoba Bisons, before being drafted by the Winnipeg Blue Bombers. Years later, I would sit at the Lions’ reunions and listen to old warriors tell stories about my dad and the intensity he brought to the game. Larry would deny the stories later and chalk it up to too many beers. However, one story that was never told at these reunions was the one of my Dad’s childhood. The story of my dad’s journey to walk. My Hockey Dad.

At the age of six my dad was diagnosed with Poliomyelitis. The chances of him ever walking again were slim. He would be in a hospital bed for close to a year, with no overnight visits with family or friends. His only companions would be the ladybugs on the windows that nurses dubbed as a sign of good luck. It is in this state that he developed a drive inside of him bigger than that of a 2 mile long locomotive. It was in this bed that he made a promise to himself that he would walk and run again- and never take it for granted. My Hockey Dad.

His story and his journey is something that I was never made aware of until I was older. When I heard his struggles, I understood the drive, the passion and the obsession. I understood him. I admired him and loved him even more for it. I would start to play for him instead of in front of him. He would follow me across the country as I chased my dream until the end. My Hockey Dad.

After I finished playing, my dad coached some of his grandchildren before permanently retiring from behind the bench five years ago. He is the first to say that he is now more of a fan than a critic. The former staple at River Heights Community Centre has spent the last few years in the stands, cheering on the third generation of “Shields” as they chase their dreams. Until this past weekend. My Hockey Dad.

This past May Long, I was asked by a close friend to take an 11 year old hockey team for a local tournament. I agreed and brought along my nephew (one of the grandchildren coached by Lars) as an assistant. As I left my house for the first game I thought about my dad and what he would be doing. Even though he is “retired”, he will use any excuse to spend time in a hockey rink. The phone call went something like this, “Dad, I’m coaching this weekend and I could use someone on the back end”, I stated. “I’m there”, was the reply. My Hockey Dad.

I arrived with my nephew at the MTS Iceplex to find my dad in the rink hallway, with game sheet in hand. The passion- it never dies. We spent most of the weekend trying to coach and instruct these young players as best we could. Three generations of Shields behind the bench- one of us had to get it right. Right? My Hockey Dad.

We would go on to win the tournament but the reward wasn’t in the trophy- it was all in the experience. Things have changed since the River Heights days, as I’m now the one screaming while my dad is more reserved. I have to say that being able to be on the bench with my family and watch these young boys laugh, sweat and win was one of the greatest moments of my life. My dad was right- this game lasts a lifetime. My Hockey Dad.

As I grow older, I understand more about my dad, the game and life. I see that this game is a gift and the opportunity to hand down lessons to the next generation, a privilege. I see how the passion grows and manifests inside of someone- for a life time. I see how the lines of family, life and hockey all seem to come together. My Hockey Dad.