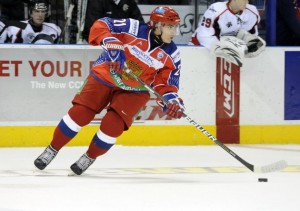 It’s been an eventful summer for Russian forward, and future NHLer Nail Yakupov. He was selected 1st overall by the Edmonton Oilers in June, signed a three-year entry level contract with the team last month and enjoyed a great experience at development camp. Now, he has been given the Captain’s “C” to lead Team Russia in the 2012 Canada/Russia Challenge. After adorning himself to Canadian fans early in the summer, he will now become the enemy, but only briefly. Oilers fans will be tuning in closely to watch their future star in action, and maybe secretly cheering for his success.

The Canada/Russia Challenge, set to start today, celebrates the 40th anniversary of the 1972 summit series between the two countries. There will be four games played, two in Canada and two in Russia. The games in Russia will commemorate the Lokomotiv Yaroslav tragedy, as players have already been paying their respects to those lost in the accident. Both rosters feature some of the best young  hockey talent, including the second overall pick in this years draft, Ryan Murray.

Game one is now in the books, but it didn’t go Russia’s way. Yakupov and his Russian teammates lost 3-2 to the Canadians in a tight contest. Yakupov scored Russia’s second goal on a two-man powerplay advantage but the comeback bid ultimately fell short. Sean Monahan, Scott Harrington and Dougie Hamilton scored for Canada, who never trailed in the game, while Anton Slepyshev had the other goal for Russia. Yakupov was quiet early on, but came alive after his blistering one-timer in the third period. The surge came a little too late, but with one game under his belt, look for Yakupov to pick up his play as the tournament goes on.  The two countries face off again tomorrow in Russia before heading to Canada for the final two games on August 13th and 14th.