NASHVILLE — Ryan Johansen had a goal and an assist, Pekka Rinne stopped 29 shots, and the Nashville Predators beat the Tampa Bay Lightning 3-2 on Monday night.

Rinne improved to 9-0-1 in his career against the Lightning. His best save came on Brayden Point’s breakaway in the first period. He also denied J.T. Miller and Hedman in an 11-second span late in the second after the Predators were hemmed in their zone for a prolonged period of time following an icing.

Victor Hedman and Nikita Kucherov had the goals for Tampa Bay, which snapped its two-game winning streak. Louis Domingue finished with 31 saves.

Forsberg gave the Predators a 2-1 lead at 6:43 of the second. Skating into the Lightning zone on the right side, Mattias Ekholm left a drop pass for his Swedish countryman just inside the blue line. Forsberg skated to the left faceoff dot and snapped a quick wrist shot high to Domingue’s glove side.

Johansen made it 3-1 at 10:16 of the second when he tipped Craig Smith’s wrist shot from the right side over Domingue’s stick. 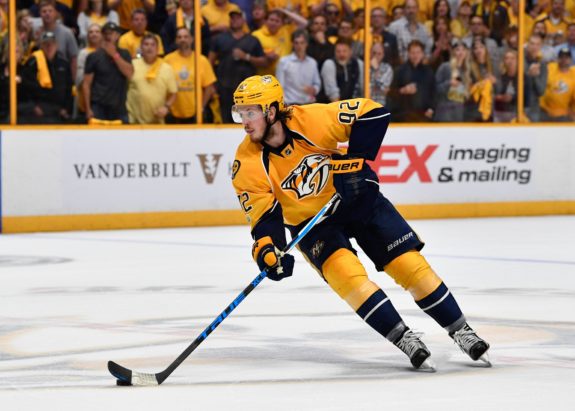 Kucherov pulled the Lightning within one at 3:25 of the third. Point carried the puck in on the right side and found Kucherov skating through the slot, where he made a move on Rinne before beating him with a backhand.

Rinne gloved down another attempt by Kucherov all alone in front with 7:31 left in the third to preserve the Nashville lead.

In the final seconds of the third, Ekholm pulled a puck off of the goal line after Hedman’s shot hit Rinne and trickled behind the Finnish netminder toward the goal line.

Hedman scored the game’s first goal at 5:10 of the opening period. Carrying the puck into the Nashville zone on the left side, Hedman pulled up at the top of the left faceoff circle and ripped a slap shot over Rinne’s glove.

Turris tied it with 4:41 left in the first. Tampa Bay killed of 53 seconds of a Predators two-man advantage, but with just 3 seconds remaining in the second penalty, Turris beat Domingue with a slap shot from the right faceoff dot just inside the near post.

Turris has goals in back-to-back games.