No one wants to see a 10 game win streak come to an end, but what goes up must come down. Down things came as the Nashville Predators fell 3-2 to the Devils. Although they lost, it was one of the better losses all season. The Predators battled back late and pushed the game to overtime. The shootout proved to be a cruel mistress, as the Devils’ sharpshooters eventually beat Juuse Saros.

Jacques Lemaire and the trap are gone in New Jersey, and a new style of play has emerged from coach John Hynes. The Devils like to play it fast and loose, and that was on display against the Predators.

While many people have spent hours debating whether possession or scoring chances are better indicators of success, we do know that the Predators lost while blowing the Devils out of the water, possession-wise. For reference, we’re using shot attempts (Corsi), unblocked shot attempts (Fenwick), and shots. All stats are at five on five. 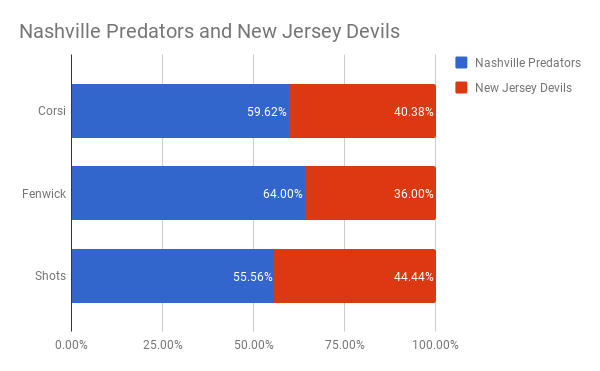 The Predators won the night, and the numbers reflect it. Winning the Corsi battle is fun and makes the game seem a bit like a shootout, but the Fenwick tells a more detailed story. Owning 64% of the unblocked attempts is a great achievement, and is indicative of a more focused team. The defense shined as they blocked about 20 of the Devils’ attempts, and made life a bit easier for Saros.

As the defense laid down their body, the shots on goal reflected it accordingly. The Predators actually outshot the Devils 25 to 20 at five on five, and it gets better in all situations. Nevertheless, the Predators controlled the pace and on any given night, this game could’ve easily ended in the Predators favor.

Last night did not start off smoothly for Ryan Johansen. As one of his biggest defenders, it pains me to criticize him, but he was pretty slow to start. Johansen is one of the best possession driving centers in the NHL, and he looked like exactly that, just not during the first period or so. Let’s go to the numbers, and for reference, we’re using the same stats as last time but with zone starts for (offensive) and against (defensive). All stats below are at even strength. 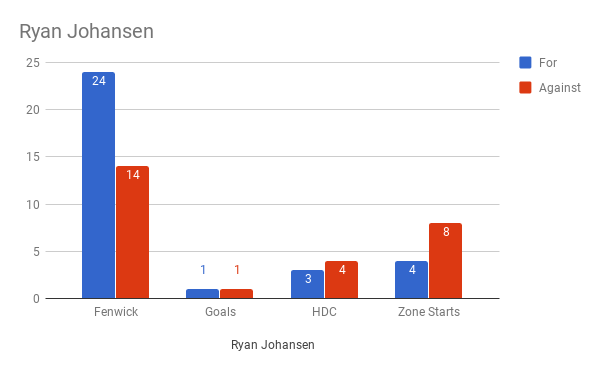 Like I said, Johansen started off slowly, but he looked great after the second period. While he was on for the second goal against, he didn’t really play a part in that. It was a tip from the right point, and Johansen was dutifully covering the left point. It’s not something I’ll blame him for, but what is on Johansen are the four high-danger chances against. I’m not saying all were his fault, but he looked lackadaisical in front of his own net and failed to tie up his man on at least two occasions.

While the high danger chances are a bit inexcusable, it’s that time of day where I defend the indefensible. Johansen received no sheltering of any kind. He started in the defensive zone 66% of the time and spent most of his ice time neutralizing the red-hot Taylor Hall and Nico Hischer. Keeping that duo to no goals is quite the feat as Hall is a Hart Trophy favorite and coming off a 26 game point streak. Johansen played a shutdown role and thrived.

It also helps that Johansen scored a big goal to tie up the game with only a few minutes remaining. He was on the ice for three high-danger chances, and cashed in on this one for an easy rebound after a booming shot from the point. I’ve said it a few times, but this time I’ll put it in “writing” — Johansen has been the best Predator since the start of the new year.

The goaltenders in Nashville are almost famously left to fend for themselves. Rinne has the highest high-danger save percentage in the league despite his defense, not because of it. This was not the case against the Devils, despite them having nine high danger chances at five-on-five. Things weren’t great for Saros, but they were still a lot better than they could’ve been. In an ideal world, the Predators will only give up six or so on any given night.

The Winnipeg Jets come to town in what will be the most meaningful game until the start of the playoffs. Patrik Laine is emerging as an Ovechkin-esk scorer who will terrorize the league for years to come. P.K. Subban and Johansen will definitely see a lot of him and his sad excuse of a beard. This game could determine who wins the Central, so there are quite a few implications. This should be one of the best games of the season.