On March 4, Stephen A. Smith did what he does for a living, which is to flail about some controversial subject at a loud enough volume to drown out the fact that he does not actually know anything about sports. The question was posed to Smith of which was more impressive: the NHL’s Chicago Blackhawks and their 28-consecutive game point streak, or the Miami Heat and their 14-game winning streak. His answer soon went viral as a new standard in abject idiocy in sports reporting…

Smith Still Thinks There Are Ties In Hockey?

It is important to note that there are no ties in hockey. The last tie in hockey occurred in 2004, nearly a consecutive decade of Smith’s incessantly shrill voice ago. Were Smith a basketball announcer, you know, someone who actually played and understood the sport of basketball like Charles Barkley or Walt Frazier, we could understand him not knowing this. Yet he is allegedly a sports reporter. A sports reporter who proudly admitted to not even knowing that Columbus had a professional hockey franchise, one which is 13 years old. 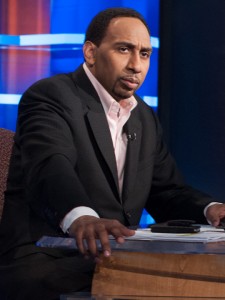 How does one debate an argument where one does not even fully comprehend both sides? In Smith’s case, loudly and obnoxiously. He is reminiscent of the kid in school who rationalizes his inability to achieve passing grades by railing against the existence of knowledge and education in general.

What Smith Would Have Said If He Only Had A Brain

Granted, though both extremely impressive streaks in their own right, the Heat’s and the Blackhawks’ streaks are entirely unrelated. On ESPN, statistically called out by deadspin.com last year as basically a Miami Heat booster club, the unfortunate viewer whose clicker got jammed on the channel certainly should have known what was coming. The Blackhawks, playing a sport that ESPN has no rights to, threaten the network’s very credibility by being the biggest story in the sports world right now. The Heat, behind ESPN human-shield LeBron James, are to the ratings-insatiable network what Jersey Shore was to MTV.

I am by no means putting down the Heat. They are the defending champions of the NBA, the top team in their sport, on a truly impressive run in their attempt to defend their well-earned title. Just look at it this way: they have won 14 games in a row. Which does not yet put them in the top 25 winning streaks in NBA history.

Judging the Heat’s streak the only way you can, which is in relation to their own sport, it is a truly impressive but not-yet-elite streak. It is not even halfway to the all time record of 33 consecutive wins by the 1971-72 Los Angeles Lakers.

As for the Blackhawks point-per-game streak? The only streak longer in NHL history tops it by just six games: the Philadelphia Flyers’ 35-game unbeaten streak of 1979-80. Analyzing the streak numbers in relation to their own sports, it is clear that the Blackhawks’ run is rarer in the context of its own sport. Chicago is both far closer to threatening the all-time record, and fewer teams have matched the Blackhawks’ accomplishments.

To put this further into context, it is important to note that both the NBA and NHL play 82-game schedules. The all-time record for wins in an NHL season is 62, set by the 1995-96 Detroit Red Wings. In the NBA? 62 wins would not get a team in the top 50 all-time in wins in a season. Why this is can be explained at length by pundits of either sport, but the numbers do not lie: the Blackhawks’ success is statistically far rarer than the Heat’s.

Yet these arguments are what Smith would have presented if, as an alleged national sports reporter, he actually educated himself on the contexts of the two teams in their two sports. As it stands, I would be impressed if Smith could even name a single member of the Chicago Blackhawks.

Sadly, ESPN does not want sports reporters with knowledge. They want glitzy names, they want ratings and most of all, controversy. They want mentally impaired racists like the ones they have hired before, Rush Limbaugh and Robert Parker, to put their ESPN brand back into the headlines, no matter how negatively. They want attention, and if they do not get it they will stamp their feet and yell until you give it to them.

Following the Chicago Blackhawks 29th straight unbeaten game on NBC Sports Tuesday night, analyst Jeremy Roenick marveled at the impressive nature of the streak. He punctuated his remarks by turning to the camera and exclaiming, “Take that, Stephen A. Smith!”

The hockey establishment realizes that, a cold-weather sport by definition, hockey will never reach the continent-wide success of baseball or football. Still, the people who have played it and coached it and written about it do not appreciate being marginalized by one marginally conscious of the rules of their sport. Roenick clearly took umbrage when the biggest story in his sport (and the biggest story in any North American sport right now) was shrugged off by Smith on account of ties, which have not existed in nearly a decade.

So, kudos to Mr. Roenick. He can often be scathing in his criticisms of NHL players, teams and management groups — but he speaks from a basis of knowledge. Sadly, Smith would be unable to claim the same thing.