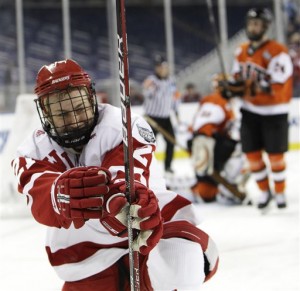 Incidentally, Division I college hockey isn’t immune to this problem either. More specifically, certain conferences are known for letting the obstruction calls go, while other conferences call the obstruction more closely. Recently, the NCAA rules committee reiterated that they didn’t want to change the rule book, but wanted to make sure the rules were called by the rule book and that the on-ice officials penalize the obstruction penalties and protect the puck carrier.

NCAA.COM – Student-athlete safety and how officials enforce the hockey rules currently in place were the major focus of discussions at the most recent Men’s and Women’s Ice Hockey Rules Committee annual meetings.

In reviewing several key initiatives and data about the game, the committee determined that enforcement of the current rules is an area that needs improvement. The emphasis in the 2013-14 season will incorporate many pieces of past standards, but with a renewed focus in some areas that would be in similar alignment with the National Hockey League. In all cases, current rules support this renewed emphasis. The committee will focus on:

“We looked at the game overall and really believe the standard of enforcement at all levels needs a renewed focus,” said Tom Anastos, chair of the committee and men’s coach at Michigan State. “This is a perfect time to reset the standard a bit, since it does not require any rules changes.”

This brings up a subject of discussion. Do hockey fans, from both the NHL and College hockey, really want the games called strictly by the rule book without any leeway what-so-ever? In other words, do hockey fans want every single incident of obstruction called during the pre-season, regular season and during the playoffs? My next question; is this even possible or realistic? Do hockey fans in general want to see a parade to the penalty box? If the refs call a bunch of penalties, it ruins the flow of the games.

For the most part, I thought the officiating during the 2013 Stanley Cup Playoffs and the 2013 NCAA playoffs was pretty good this past spring. Sure, there were a “few” blown calls, but that happens anytime you have the human element involved.

Going forward, I hope the officials continue to call the games the same way they do right now. I like that standard that has been set. During the regular season, of course more obstruction penalties get called. As the games move to the post-season, there are going to be less of the questionable ticky-tacky penalty called and power-plays awarded. More specifically, in the playoffs, the games become more of a grind-it-out style of game. Also, no one wants to be that official that makes a bad call that decides a series or game.

In the playoffs, the on-ice officials are less likely to just call penalties and award power-plays, in any league. What’s a penalty during the regular season is not necessarily going to be a penalty the following week during the Stanley Cup Playoffs or Regional Finals, the officials are going to let the “players” decide the games on the ice. Is that really a problem? It’s easy to put a pen to paper and say that you’re going to do something, executing that plan is another thing.

Moving forward, the NCAA Ice Hockey Rule Committee can issue all of the memos that they want about on ice officiating, getting the officials to actually call the rules that are on the books is another thing. We have seen this skit before and in the past, the refs have called the games tight for a while and then backed off, much like the NHL has.