NCAA Division I hockey has proven to be a difficult league to predict this season. Many programs that were expected to top this year’s rankings have been knocked off by notoriously weaker teams, such as when the UMass Minutemen topped the Ohio State Buckeyes last week.

This weekend featured the battle of two hockey giants; the Minnesota Duluth Bulldogs went on the road and took on the Notre Dame Fighting Irish. It was a rematch from last season’s championship game, and the reunion did not disappoint. Meanwhile, the Boston University Terriers were shutout by one of their Hockey East rivals, the Providence Friars. It has proven to be BU’s worst start to a season in 20 years.

The US College Hockey Online (USCHO) rankings have Minnesota Duluth as the No. 1 team in the nation. The 2018 National Champions are back on top after defeating last week’s No. 1 seed in Notre Dame. Cornell saw the biggest fall from No. 8 to No. 18 while teams that were originally unranked to begin the 2018-19 season, like Quinnipiac and UMass, have continued to climb.

The Bulldogs were able to sweep the Irish this weekend to remind the college hockey world that they’re still in charge. They were able to win by one goal on Friday; the first frame was a grind that resulted in a scoreless tie. After senior Parker Mackay put UMD up 1-0 just minutes into the second period, Notre Dame struck back. Junior Andrew Peeke executed on the power play to knot the game at one apiece. With just over five minutes left in the second frame, sophomore Colin Theisen walked down the right wing and fired a wrister past UMD’s junior goaltender Hunter Shepard.

Thus Duluth was on its heels until sophomore Nick Swaney was able to net a shorthanded goal to tie the game in the final period. As it began to look as though the matchup was destined for overtime, sophomore Dylan Samberg potted the game-winning goal with just three minutes to spare. The goal was assisted by Swaney and senior Peter Krieger to complete Friday’s 3-2 victory. 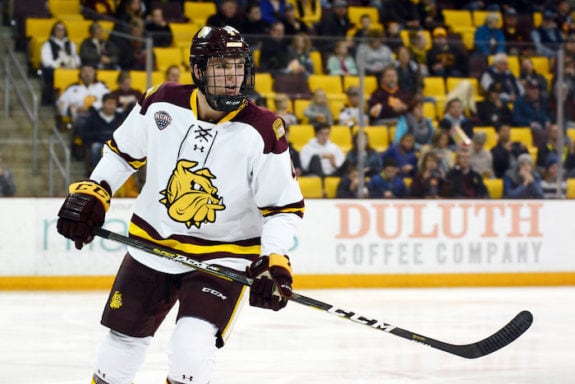 Dylan Samberg scored the game-winning goal for the Minnesota Duluth Bulldogs on Friday to complete the first leg of their sweep of Notre Dame. (Credit: Brett Groehler)

Despite taking 16 minutes worth of penalties and losing the majority of the game’s draws, the Bulldogs never trailed the Fighting Irish on Saturday. Sophomore Kobe Roth inked his second goal of the season halfway through the first period which led up to a goal from freshman Noah Cates just a few minutes into the second frame. Notre Dame was able to respond in the third, but a late insurance goal by Noah’s brother Jackson Cates sealed the deal.

The sweep of Notre Dame elevated UMD to a 6-1-1 record on the season. They will begin conference play with a trio of weekend series against Colorado College, University of Denver, and North Dakota in November as they attempt their title as the No. 1 program in the nation.

The Terriers have dropped four straight games to start the 2018-19 campaign. They have failed to score a single goal against Hockey East opponents resulting in a conference record of 0-2-0. It is the worst start BU has had in 20 years.

The Terriers fell to Providence on Friday by a score of 5-0. In the opening minute of the game, freshman Jack Dugan found the puck below the BU goalline and tossed it to the front of the net. The pass bounced off a BU stick and squeaked by junior goaltender Jake Oettinger. Despite falling victim to some bad luck, the Terriers stayed calm and had most of the momentum throughout the opening frame.

WATCH: Dugan gets us off and running with his second of the season. Assists to Wilkins and Desharnais at :58. pic.twitter.com/xRWgzyXi9u

The Terriers had the majority of possession but was only able to get four shots on goal—six of their attempts in the first period were blocked while another five attempts whistled wide of the net. When on the power play, it seemed BU was trying to be too perfect as they hunted down a highlight-reel goal. A number of passes to the point lacked accuracy and forced the Terriers to regroup before mounting another attack time and time again.

However, the second period belonged to the Friars. Oettinger kept his team in the game with a number of big saves, but juniors Brandon Duhaime and Spencer Young were able to get pucks by the netminder. By the period’s end, Providence was outshooting BU 22-9 and had a 3-0 lead. Duhaime scored again just 42 seconds into the third period and junior Kasper Bjorkqvist put the icing on the cake with his second goal of the season.

The Terriers have their work cut out for them as they prepare for a home-and-home series with the Northeastern Huskies who have gone 4-2-0 to start the year. The top of the Hockey East standings isn’t quite out of reach yet, especially with rival Boston College winless as well, but the gap between the Terriers and first place will increase in a hurry if BU can’t get back on the horse and nab its first win of the season in the coming days.