If it not for the Shea Weber/P.K. Subban deal, the Taylor Hall/Adam Larsson trade would have been the talk of the 2016 offseason, for good reason. Offensive players of Hall’s caliber are not traded too often — first overall-picks being traded is even rarer. Oddly enough, when this move was first being discussed there were rumors the potential player being moved would be another top pick, Ryan Nugent-Hopkins. That would have been a fair deal and would have benefited both teams.

When it was announced Hall had been traded for Larsson I was surprised but not sold just yet. I was wondering what else the New Jersey Devils had given up because there had to be more to this deal. I was certain a first-round pick, like Adam Henrique or another good asset, was on the way to Edmonton. Then, it was confirmed to be a simple one for one deal. Ray Shero had officially pulled off highway robbery.

This trade was a steal no matter how you look at it. No disrespect to Larsson — he is a solid top-four defenseman — but Hall is an elite, top-five player at his position. Fans were excited to see what he could do in his first season at the Prudential Center. Now, it will be fun to see what he can do with a good forward core around him. So let’s take a look at what can be expected from the star left winger in 2017-18.

To predict what Hall will do in his second season in Newark we will have to examine his first year with the Devils. The new #9 recorded 20 goals and 33 assists for 53 points. He led the team in assists and was tied for the lead in points with Kyle Palmieri. It was an impressive, albeit not jaw-dropping, season.

That stat line may not jump off the page but it is very respectable if you consider the state of the roster last season. The only combination that consistently worked was the trio of Hall, Palmieri and Travis Zajac. However, with almost no production from other lines, those three were broken up frequently. Head coach John Hynes would usually start them together, to score early, or end with them together, to try and tie a losing effort. The bottom line is those three did not play together as much as they should have.

This meant that Hall was constantly being shuffled around and never found true chemistry with his teammates. It also showed that there were only three or four productive forwards for the Devils. Unsurprisingly, it is a lot easier to defend a handful of players than an entire team. That leads to increased attention to those few difference-makers, making it easier for opposing teams to shut them down. Zach Parise had encountered this problem with the Devils before Ilya Kovalchuk arrived in 2010. Fortunately for Hall, talented players are already on their way to Newark next season.

It is safe to assume that Hall will perform even better in his second year with the Devils. With an influx of new talent, less pressure will fall on his shoulders. The aforementioned Hall-Zajac-Palmieri line will also be able to stay together with a more well-rounded forward group behind them, leading to more production from all three. Just look at what the former Oiler was able to accomplish with a revolving door of linemates and defenses game-planning primarily against him for an entire season. 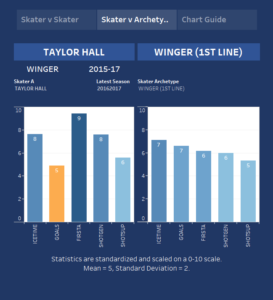 Now think about what that chart will look like when opposing defenses have to worry about Nico Hischier, Marcus Johansson, Brian Boyle and potentially Mike McLeod or Blake Speers. All of those new additions have improved the offense tremendously and have left a good impression on the Devils’ best player. It shows that Shero and the Devils are committed to building a winning team. Hall will be a key piece to that puzzle for the foreseeable future.

Hall is an extremely good skater, with good hands and a deceptively good shot. He is the total package — I still can’t believe the Devils acquired him. He remains ultra-motivated to make the playoffs for the first time and next season represents his best chance at doing it. The Devils will have an impressive, potential-filled offense and can expect a bounce-back year from goaltender Cory Schneider.

The defense is still a work in progress, but the Pittsburgh Penguins just won two Stanley Cups with a questionable blue line, so it is possible to succeed. Obviously the Pens have a much better offense in front of their defense, but it shows that a superior offense can carry a lackluster defense to the promised land.

Hall is the biggest part of the offense right now and will be leaned on for this upcoming season to deliver the Devils to the playoffs. I would expect 20-25 goals and 45-50 assists for around 70 points. It should be a better year for him and the Devils as they try to break their playoff drought.