NEW YORK — Ryan Pulock scored his second goal of the game 2:23 into overtime to lift the New York Islanders to a 4-3 victory over the struggling Colorado Avalanche on Saturday.

Jordan Eberle had a goal and an assist, Josh Bailey also scored and Brock Nelson had two assists for the Islanders. Robin Lehner stopped 25 shots as New York, which began the day two points ahead of Washington atop the Metropolitan Division, won for the eighth time in 11 games (8-1-2). 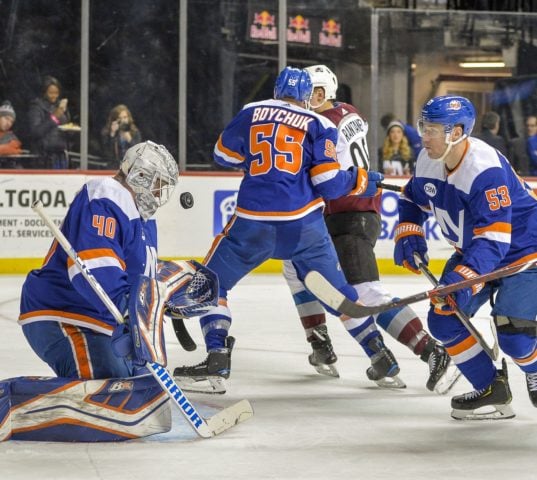 On the winner, Pulock fired a one-timer from the left faceoff circle off a pass from Casey Cizikas for his fifth of the season.

Carl Soderberg had a goal and two assists, Erik Johnson had a goal and an assist, and J.T Compher also scored for Colorado, which matched a season high with its sixth straight loss (0-4-2). Semyon Varlamov finished with 37 saves in the Avalanche’s 16th loss in 19 games (3-12-4).

Tyson Barrie nearly won it for Colorado 15 seconds into overtime, but his shot went off the crossbar.

Compher tied it 3-3 with 2:45 remaining when his shot deflected in off the skate of Islanders defenceman Devon Toews.

The Islanders had taken their first lead of the game a little more than three minutes earlier with their third straight goal after trailing 2-0 early in the second.

Just 5 seconds after Soderberg and New York’s Mathew Barzal were sent off for roughing, the Avalanche’s Gabriel Landeskog was whistled for hooking to put the Islanders on a 4-on-3 power play. New York took advantage of the open ice 23 seconds in, with Pulock beating Varlamov with a slap shot from the left circle with 6:03 remaining.

Bailey tied it 2-2 at 8:03 of the third, putting in the rebound of his own shot after Varlamov stopped the initial attempt. It was Bailey’s 12th of the season and first since Jan. 18 against Washington.

Johnson pushed the Avalanche’s lead to 2-0 at 2:36 of the second. With the teams skating 4-on-4 after a pair of penalties, he got a pass from Soderberg, skated into the offensive zone and cut to the right before firing it into the top left corner for his fifth.

Eberle finally got the Islanders on the board with 1:47 left in the middle period. Varlamov stopped Anders Lee’s shot from between the circles but was unaware the puck trickled behind him, and Eberle skated in from the left side and knocked it in for his 13th.

Lee nearly gave the Islanders the lead in the opening minute of the game from in close on the left side, but Varlamov deflected the puck with his stick.

Soderberg then got Colorado on the scoreboard with 9:41 left in the opening period when he knocked in the rebound of Erik Johnson’s shot that bounced off the end boards right in front for his 18th.

NOTES: Colorado also went 0-4-2 from Dec. 21 to Jan. 2. … Soderberg has eight goals and four assists in 15 games since Dec. 31. … Johnson has two goals and two assists in his last three games. … The Islanders swept the season series after winning the first meeting, 4-1 on Dec. 17 at Denver. … New York F Cal Clutterbuck sat out with a lower body injury. Tom Kuhnhackl, who sat out the last 14 games since Jan. 3 vs. Chicago, took his place in the lineup. … Pulock now has six points in his last four games. … Nelson has points in four straight games, totalling four assists and five points in the stretch.

Avalanche: At Boston on Sunday to finish a three-game trip.

Islanders: Host Minnesota on Sunday to wrap a three-game homestand.

Vin A. Cherwoo:, The Associated Press