In a strange loss against the Dallas Stars, with little to no pace, New York Rangers head coach John Tortorella hit the nail on the head.

“Not a whole hell of a lot of hate out there.”

The game was very tight defensively, and there was a sense that the first team to make a misstep would go home without a point. Unfortunately for the Rangers, defenseman Jeff Woywitka made that mistake, and the Rangers paid dearly for it.

The pace of the game was certainly lack-luster, as the team spent nearly 60 minutes trying to feel eachother out. There was a great lack of flow, and neither team was able to set up any sort of cycle in the offensive zone. 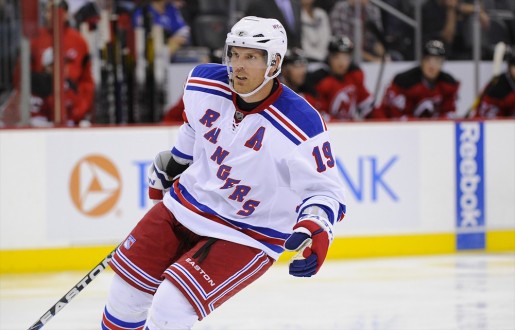 Brad Richards faced off against his former team for the first time. (Rich Kane/Icon SMI)

“They kind of lulled us into a quiet type of game,” Rangers’ center Brad Richards recalled after the game.

The game of course had some extra-curricular activity injected into it.  Halfway through the first period, rookie winger Carl Hagelin made incidental contact with Stars netminder Richard Bachman when both tried to play the puck. Hagelin was whistled for charging, much the chagrin of both fans, and the team.

Rookie goalkeeper Richard Bachman was unbelievable for the Stars, and kept them in the game all the way through the end. He earned the shutout, and the praise of many players on the Rangers. Even Tortorella was impressed with the

“The kid played good,” Tortorella said. “He’s played well for them I guess.”

Looking ahead to the brief roadtrip, the Rangers will face off in St. Louis against a Blues team that was expected to be a bottom dweller. The Blues started off the year playing terrible hockey, but after they fired their bench boss, and bringing in veteran coach Ken Hitchcock

The game should start off with a similarly slow pace, but the Rangers should do their best to avoid the trap of a low tempo game. They have had their most success this year in high tempo games, with a hard edge.

Defenseman Michael Del Zotto admitted that they typically have trouble with these types of games, “ “When you don’t see a team that often there isn’t that same emotion like when Philly came into our building, for example.”

With Michael Sauer being placed on Injured Reserve, the team called on Rookie Swedish defenseman Tim Erixon for a little emergency help. Erixon is almost at a point per game at the AHL level, but struggled with the tempo of an NHL game when he saw NHL action at the beginning of the season.

It will be an interesting test for the Rangers as they face off against non-conference opponents. They need to bring their own emotion to a game against teams that have a non-existent rivalry.