A new proposal for NHL realignment has been making the rounds. Of course, everyone’s concerned with how the changes will affect rivalries and the beloved playoff format. These are legitimate hockey concerns. There is one other driving factor that needs to be considered: the financial impacts.

One team that should be particularly concerned, especially with their ongoing financial struggles and recent ownership challenges, is the Phoenix Coyotes.

It’s no secret that the Coyotes have struggled to attract fans despite their improved play on the ice. They’ve been ranked in the bottom three in league attendance six years running. While their numbers are up this year, so are everyone else’s, leaving them at the back of the pack. 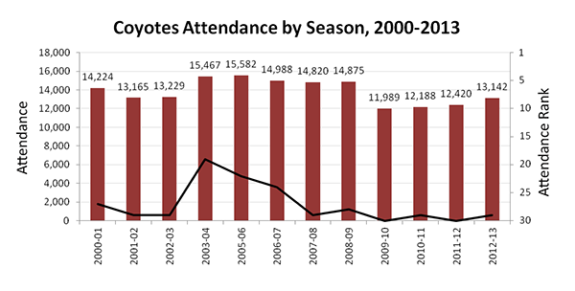 The realignment proposal and game breakdowns were beautifully captured by CBC’s Elliotte Friedman. Based on the rotations of home games played against teams in the division (two or three)  and against teams in the conference (one or two), I calculated a split of games so as to accurately and fairly weight the attendance figures. Since the current schedule is unbalanced, I combined 2010-11 and 2011-12 for all team when calculating averages.

Detroit and Chicago are the some of the top draws in Phoenix, both bringing in an average of over 15,000 fans per night over the past two seasons and making up five of their eight biggest crowds over that time. Under the new proposal, the Coyotes would lose one home game against Detroit, leaving them with just one matchup in Glendale. The Blackhawks, remaining in the West but in the other division, would alternate years of two games and one game in Phoenix. Mathematically, that’s losing a game-and-a-half to two of the largest-drawing shows that come to town. Obviously, the Coyotes are getting screwed by the league here, right?

While they lost games against Detroit and Chicago, they also give up games to poorer-drawing teams like the Nashville Predators, who’ve brought in an average of fewer than 8,500 fans per game over the past three years. They also lose games to Minnesota and the Los Angeles Kings, who, up until this year, were barely drawing 11,000 to Phoenix. (As cup champions, the Kings drew significantly more fans in their lone game in Arizona in 2013, so there will be potential seats lost in years when they only play the Kings at home twice.)  The Coyotes also give up a game to Columbus, who moves to the East, and two games to Dallas, who moves to the other Western Conference division. Those teams are both right in the middle of the pack with attendance in Phoenix.

What the Coyotes Gain

One of the biggest scheduling changes under the new alignment is that all 29 teams will make an appearance at Jobing.com Arena. While some Eastern Conference teams tend to draw poorly – New Jersey, Carolina, and Ottawa all playing in front of less than 9,000 fans on their last visit – they’re offset by the one-time spikes in ticket sales to see the Bruins (17,459), Flyers (14,913), Penguins (14,642), who always bring out the fans. They’ll also come out in force to see their former conference-rival Red Wings on their lone visit. Having one opportunity to see a team – every team, under the new schedule – should help motivate fans to head to the arena.

The Coyotes have also seen their attendance grow against teams that they’ll be playing more frequently, most notably the Canucks, who brought in 16,691 in their last trip to the desert. A total of 14.1% of projected attendance will come in games against the Canucks and Sharks. The Jets and Oilers, both also on the rise in Glendale, will come to town more frequently under the new realignment proposal.

Overall, the team’s attendance, based on 2011-12 figures, will increase an estimated 3% because of realignment. Sure, that’s not a significant increase, but it is a positive change – even with fewer visits from the Wings and Hawks. Factor in the increased attendance this season – up 27% over the first eight games – and you’re looking at a significant increase. Even if the initial excitement of a post-lockout season wanes slightly, a more conservative increase of 13.5% compared to 2011-12, half the current season’s increase, would boost attendance to a projected 14,360 per game. That would get them out of the attendance-rankings basement and back to the kind of numbers they were pulling back in 2008-09. Plug in the average ticket price of $40.32, courtesy Five for Howling, and that’s a hard-dollar boost of almost $70,000 per game – nearly $15,000 of which can be attributed to realignment and the subsequent schedule changes. Sure, it’s no wealth of riches, but that amounts to an estimated increase of $600,000 per year just from the schedule change.

There are additional financial benefits outside of the ticket revenue. Realignment will see the Coyotes spend less time traveling and changing time zones. While confirmation of the realignment plan and the subsequent schedule are far off, it’s safe to assume that the team will be making a few east coast swings to pick up those inter-conference games. If they’re not able to reduce their mileage, they can certainly make it easier on the players and find opportunities to reduce spending.

Phoenix has plenty of concerns these days. The ownership situation is still a huge issue in Phoenix. Greg Jamison has yet to find a way to close the deal and purchase the team.  General Manager Don Maloney has his hands full with maintaining the quality of the product on the ice, especially with Mike Smith in the final year of his contract and a handful of players entering Restricted Free Agency at the end of the season. The proposed realignment should give the Coyotes a more favorable schedule.  Provided they can ice a quality team, they should benefit from the change.   Realignment should also help with attendance, ultimately boosting the Coyotes’ bottom line.

Of course, that’s assuming they’re still in Phoenix when realignment rolls around.