Last night on its home page, the NHL ran a story about Ottawa forward Mark Stone, and the injury he sustained when PK Subban slashed him in game one of their quarterfinal playoff series. 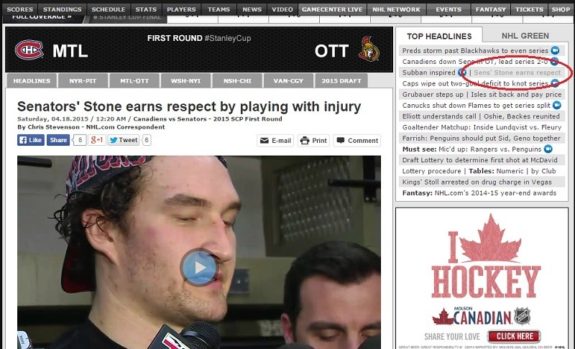 “He’s going to battle through it and do what he has to do. That’s all you can ask of a teammate. For him to step in there as a young guy, it’s gritty of him. Hats off to him. It’s that time of year when you need guys to step up and be a man, and that’s what he is. It’s great having him in there and it makes you want to go that much harder when he’s out there.”

“It’s nice to see him kind of stick it to those people who were questioning him and his toughness.”

From the fan’s perspective, Stone’s return for game 2 was kind of a given. Of course he’ll play. In 1994 Jim Robson famously told Canucks fans that Trevor Linden would play game 7 against the Rangers: “You know he’ll play. He’ll play on crutches.” So if Linden would play, so too would Stone. If Gregory Campbell can finish his shift on a broken leg, Mark Stone can deal with a lousy microfracture in his wrist. Microfracture? Ten percent of the population is probably walking around with a microfracture somewhere in their skeletal system.

It’s just another example of how the league sells the toughness of its players. And how the players willingly take part in the trope, happy to be seen by their peers and by the fans as hockey-tough.

This story wouldn’t mean a whole lot in prior seasons. But it has a new wrinkle this year.

This is the year that former NHLers including Butch Goring and Greg Adams brought forth their mammoth class action lawsuit against the League … a lawsuit that goes to great lengths, on multiple occasions, to blast the League for promoting this very narrative—that real hockey players go back on the ice after they’re injured, and that there’s an ingrained peer pressure, a coercive collective, in hockey culture that makes the desire to get back on the ice and help one’s team the only acceptable attitude, and further, that the League relies on this coercion to cajole injured and possibly reluctant players to get back out there.

Granted, the lawsuit is often injury-specific, harping on head injuries. But it is not specific about this narrative. In fact it shamelessly paints the players as lambs who, since they were Mites, have been led to the NHL slaughterhouse, where powerful men in pinstripes twirled their mustaches with one hand and gripped money bags with the other as the players beat one another to a pulp, entirely ignorant of the damage they were doing. As I read the lawsuit this past winter I said to myself countless times, Really, were the players that stupid?

Each time, the lawsuit would assert that, yes, they are.

For a long time, the nature of the injury didn’t matter, what mattered was the enormous peer pressure coming down from above telling every player that unless you’re receiving last rights you better get back in time for your next shift.

Now, if Stone had suffered a head injury of any kind, we wouldn’t be seeing this narrative. Instead we’d hear about him undergoing some vestibular exams in the locker room; everybody would be discussing Stone’s injury with tremendous if somewhat naive and even mislead gravitas while scolding the villain Subban for having–possibly, potentially–intentionally targeted his head.

Fortunately, it wasn’t a head injury. Just a fractured bone. Brought on by a heavy two-handed slash—the exact kind of violent stickwork that has been a hallmark of the NHL since before anyone can remember. Give a guy a stick, it’s only a matter of time before he cracks you with it.

Whereas the Senators’ side of this tale represents Stone as hockey-tough, the Canadiens countered with a stroke of genius–a story about how Jean Beliveau’s widow provided the inspiration Subban needed to overcome game one and the criticism he received for the slash, so that he would shine in game two. (Since when has PK Subban lacked in inspiration to win a hockey game?)

It may seem like two teams spinning one story (and it is), but it is just one league.

Clarence Campbell once famously said that while the NHL sells fighting, it does not promote it.

By posting these stories on its front page, the NHL is illustrating for all to see—including lawyers for the plaintiffs suing them–that not only does it actively sell violence in hockey, it eagerly promotes it too.