(Editor’s Note: Apologies to all those who tried to vote yesterday — HTML is the devil’s language — the polls are up and running normally today.)

Ever since the ability to trade players was introduced in NHL ’95 for Sega Genesis and other consoles (according to Gunaxin Sports [not safe for work], which offers a pretty sweet 40-year chronology of all NHL video games), fans became architects of the virtual world and suddenly the job of a general manager didn’t seem all that difficult.

As much as we all wish to take the reins of an NHL franchise for a day, the complexities of the trade deadline are probably better left to the pros. Luckily for us, we’ve got fantasy hockey, video games and thehockeywriters.com.

We need your input on the possibilities of the following moves, which fans and experts from all across the web have concocted. 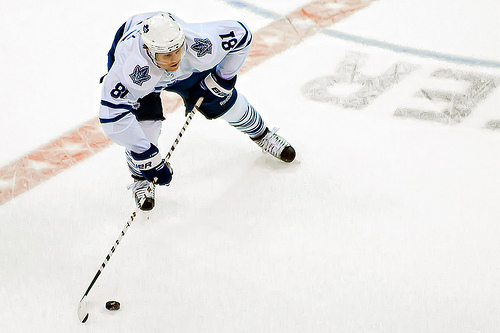 Kessel has stated he’d like to stay in Toronto, but stranger things have happened at the trade deadline.

Kessel’s frustrations have been cited on TSN.ca and elsewhere following his demotion to the third line in Toronto. The Hockey News’ Ken Campbell said, “Kessel has never had the reputation of being a player who could be either the on-ice inspirational leader for any team, but asking him to do so on a bad team with little talent is not only a terrible mistake, it’s not the least bit fair to him.”

Campbell cited Kessel with 89 points in 122 games as a Leaf, but a potential asterisk is his -30 rating. Many have said players like Mats Sundin and Jarome Iginla have had stellar careers playing alongside not-so-stellar linemates, but perhaps it’s too soon to count the 23-year-old Kessel out altogether. Some have speculated a Heatley-like situation developing for Kessel, but the winger recently ruled that out in a Toronto Sun article, as he said, “I don’t want any trade or anything like that. I want to be here for a very, long time.”

All things considered, especially the cost at which Kessel was obtained, his desires to remain in Toronto will likely prevail. But with constant speculation that the Kings, who have the cap space, are on the market for a scoring winger (Dustin Penner?) — is it perhaps in the cards?

It’s been noted on several blogs, including over at Spector’s Hockey, that the Blue Jackets are likely to be one of the busier teams at the deadline, whether that denotes buying or selling remains to be seen. While much hasn’t surfaced regarding bringing in a goalie, acquiring one of Vokoun’s calibre could be a huge boost for the team who has struggled in net since Steve Mason’s fall from grace.
Florida has an exciting goalie prospect in Jacob Markstrom and Columbus has the space to accommodate Vokoun, whose new contract will likely be in the $4-5 million range. Spector suggests a rebuild for the Blue Jackets may be in the works, and it would definitely make life easier having goaltending concerns relieved from the outset.

Pens fans won’t soon forget what Bill Guerin accomplished for the franchise, and pending UFA Jason Arnott could bring a similar element to the table, especially in lieu of Evgeni Malkin and his season-ending injury.
The Devils, a dark-horse in every sense of the word to make the playoffs, are on a second-half tear but may look to load up for next year as the regular season comes to a close.

The Rangers, according to Spector, have been scouting Sheldon Souray in Hershey, but Bieksa would perhaps be the better fit on Broadway.
He’s got the power-play ability (although hasn’t been called upon much on the man advantage in Vancouver, given the wealth of offensive d-men there), the physicality and experience to help lead one of the youngest blueline groups in the league.There are a number of options for the Rangers as far as mid-priced UFA defensemen (Ian White, Joni Pitkanen, Tomas Kaberle, etc.) but Bieksa could yield a nice return from New York if the Canucks are willing to part ways.

Rob Blake’s departure may have left a hole in the San Jose defense but Chris Phillips could help fill the void.
The cross-conference trade is usually the preferred method for general managers, but several teams could be in the mix for Phillips’ services. Phillips had fared well with shutdown players like Chara and Volchenkov in the past, and could pair up nicely with Douglas Murray in SJ.

The 31-year-old winger, whose name is already on the cup, could be perhaps the most affordable commodity on the market. He’s got a cap hit of just $1.7 million this year, which looks great alongside his 42 points and league leading seven shootout goals.
The Thrashers are caught in one of the worst skids of the season and could use another veteran forward in the locker room. Perhaps Niclas Bergfors could be shipped to Calgary, who although is on the cusp of making the playoffs, will must keep winning at a torrid pace to keep up in the perpetually difficult Western conference.

Wishful thinking welcome —  let’s hear your hopes for the 2011 NHL trade deadline in the comments section below: