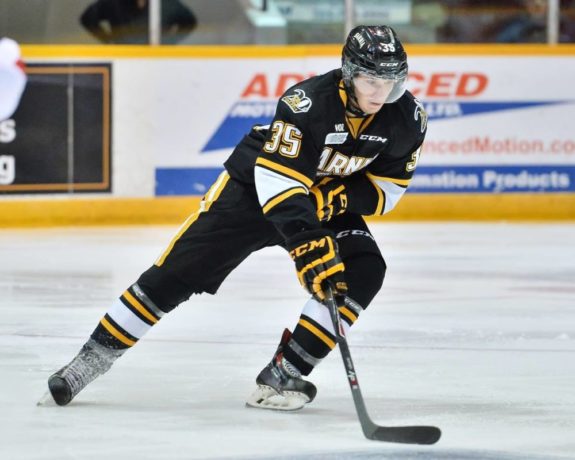 Nikita Korostelev is everything you’d expect from a Russian hockey player who plays the wing – all offense and little to no defense. Drafted by the Sarnia Sting 9th overall in the 2013 OHL Priority Draft, Korostelev has been one of Sarnia’s few offensive bright spots since Alex Galchenyuk and Nail Yakupov left the team a few seasons ago.

A nifty set of hands, Korostelev is a master with the puck on his stick and dekes so well in tight spaces. Around the net, the young Russian can embarrass goalies and defenders and he couples his stickhandling with a devastatingly quick shot. Last season he scored 17 goals for the Sting and followed it up with a 24-goal campaign this season. Another part to Korostelev’s game is his skating. Able to reach top speed in a handful of strides has made Korostelev a threat on the wing. He can also turn on a time, making him elusive for defenders to keep up with him.

His biggest hinderance is his play in the defensive zone. It’s almost nonexistent. Korostelev will oftentimes be so focused on breaking out of the zone on a rush that he will not get back into the play in his own zone. He cheats along the boards which causes him to get out of position. He has decent size, but rarely ever uses it and relies mostly on his stickwork instead of his strength. Still, his offensive skill set is tantalizing enough that a team will want to nab him before he falls too far in the draft.

You can’t deny his offensive talents, but his poor defensive skills may cause him to drop to the 3rd round.

“A goal scoring winger with decent size…handles the puck well and can deke his way through defenders…has the size and strength to also push his way to the net…skates very well with solid top speed and good agility…possesses a great set of creative hands…dangerous one-timer and lethal wrist shot…has a killer release on all his shots…can get too fancy at times, over handling the puck…not always consistent in his effort level…needs to work on his play on his own side of center ice…has an abundance of high-end tools to work with. (December 2014)”

“Russian import in his second year in the OHL. Has displayed a strong offensive game not only in open ice but along the wall. A strong puck carrier and stickhandler who has already surpassed his goal totals from his rookie year. Despite the fact that he is thin 175 he certainly plays stronger and bigger than his size. His biggest flaw is almost a complete lack of game when he doesn’t have the puck. That might be a matter of learning and maturing into a 200 game. There is no denying his skill set and abilities to undress defender and surprising speed in the attack zone. He has significant upside and projects as a possible first rounder.”

Korostelev has dual citizenship in Russia and Canada and has not represented either one in an international tournament.

Top-six sniper with dangerous hands and can be utilized on the powerplay.