Even though it feels like they get together every week or so, the 30 General Managers of the NHL are meeting yet again in Boca Raton, Florida for a summit on rule changes that they want to add to the game. There aren’t any major ones on the docket (changing the way standings points are allocated, perhaps?), but there are plenty of others that are being discussed.

Author’s Note: For the full breakdown of how these rule changes are being talked about (and who discusses them), it would behoove you to check out Pierre LeBrun’s entry on ESPN’s Cross Checks blog.

One of the biggest topics of conversation in NHL circles the past few years, excluding of course the debate over head shots, has been what to do about icing. In the current age in which players are stronger and faster than ever, it seems asinine and barbaric to allow players to careen toward the end boards at full speed in a violent race to touch up for icing. With that in mind, several leagues have already adopted rules on no-touch icing, and others have adopted what is known as “hybrid icing”, which basically entails having players still race to the puck, but instead of the goal line being the delineation point, the face-off circles would serve as the de facto boundary.

Several GM’s have pushed for this rule change, and there seems to be a ground swell of momentum in favor of adopting it in the NHL. To put the desire for the change into perspective, it helps to look at what the NFL has done in terms of player safety on a play that makes them needlessly vulnerable to injury.

On kick-offs, players are flying around the field, and some pretty horrific injuries have taken place as a result. With that in mind, the league decided to move the kick-off line to the 35 yard line instead of the 30, and despite some grumbling from teams like the Chicago Bears and a huge spike in touchbacks, the move was widely praised. Safety trumps excitement for the most part in these debates, especially in preventable instances like these. 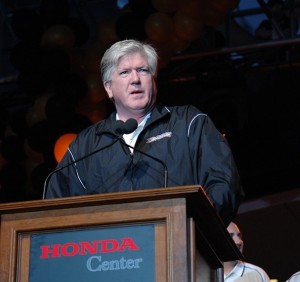 The hand pass rule is one of the most frequently explained on just about any NHL broadcast, and with good reason. The ability of teams to only make hand passes while in the defensive zone is occasionally  confusing to folks who don’t watch the game all the time, but the rule being in place is certainly a help on penalty kills, as well as when a defender loses a stick.

Mike Gillis, the GM of the Vancouver Canucks, doesn’t necessarily agree with that train of thought. Instead, he is pushing to ban hand passes even in the defensive zone, and in an effort to boost offense, he wants there to be a two-minute minor penalty assessed whenever someone plays the puck with their hands in the defensive zone.

Apparently, there is some traction on the issue among GM’s, but this is probably a rule change they want to stay away from. Banning hand passes all over the ice would be one thing, but to suggest that tacking on an additional two minutes of penalty time seems like a bit of overkill for a play that doesn’t happen all that often in the course of a game. A better solution would be to tighten up on enforcing the rule that players aren’t allowed to close their hands on the puck, as that will encourage more swiping at the puck, instead of allowing players to continue to throw it forward.

After the lockout that cancelled the 2004-05 season, league officials were looking at ways to boost scoring. They come with several concepts (one of which will appear later in this list), but one of the more dramatic changes was to allow two-line passes, and to essentially relegate the red line to a boundary only significant on icing calls.

This change has certainly had its desired effect, with players frequently banking passes off the side boards to start off breaks and a slew of guys who make their living on taking advantage of quick line changes to get breakaway opportunities.

Now, with the league increasing its emphasis on player safety, there is a push in some circles to slow the game down to an extent. One way that has been suggested to accomplish that goal would be to re-ban two line passes and make the red line relevant again. As stated earlier, there are places in the rule book where safety has to trump excitement, but in this situation, that likely isn’t the case.

Toronto Maple Leafs GM Brian Burke is one of the many executives who is against this move, saying that the game is in a tremendous place right now in terms of fan interest due in large part to the changes to the rules to encourage scoring post-lockout. Slowing the game down would not only be boring for them, but it probably wouldn’t do as much to prevent injuries as other more directly influential changes could do.

Speaking of rules that were changed to improve the pace of the game, the relegation of goalies to a limited area behind the net was one of the biggies to come out of the lockout. The league legislated that a goalie playing the puck in the restricted area was a violation, and ruled that it would be a two-minute penalty on the play whenever a goalie did so. Needless to say, this change hasn’t been popular with fans of the game, and calls for this rule’s expulsion from the rule book have been loud and frequent.

To be perfectly frank, the trapezoid should be eliminated for simple common sense reasons. Goalies will be punished adequately even if they handle it in what is a restricted area now, as there’s the ever pressing concern about what would happen to the puck if it somehow gets past them while trying to move the puck up ice. Guys like Marty Turco and Martin Brodeur have made a living in handling the puck in all areas, and if they let them do that again, the league would benefit greatly.

There is also the safety aspect of the rule, as LeBrun points out in his blog post on the meetings:

“This group Monday discussed whether it’s time to eliminate it. The theory is that defensemen are facing needless hits from forecheckers on soft dump-ins because goalies can’t come out and play the puck in the trapezoid.”

It’s a valid point, and even though there is some question as to whether the league will adopt the rule, it is one that they definitely should look at.

Eliminating the Over the Glass Rule

Finally, there is talk over the much-despised over the glass rule. Nearly every NHL game features at least one incident where a defensive player whacks the puck over the glass, and then there is a Zapruder-like review of whether or not it hit another player’s stick or the glass on the way over. Then, after all options are exhausted and the player is sitting in the box, the commentators and the Twitterverse both bemoan the existence of the rule.

Unfortunately for all of those who don’t support the rule, the league doesn’t appear poised to change it. GM’s are probably in the camp that if they abolish the rule, players will just flip pucks into the stands at every opportunity they can get, but it wouldn’t seem logical for them to do so. No matter what they’re thinking on the subject, GM’s just don’t seem to get as upset about it as fans do, and that’s a real shame, because this is a rule that nearly everyone doesn’t enjoy.

At the very least, officials need to be given a degree of discretion on the rule. There have been plenty of incidents when a player was taking a stab at a puck and it happened to shoot up in the air and over the glass, and that’s obviously not a blatant attempt to delay the game. Giving the referees a degree of autonomy in interpreting a rule may not be the best idea in all circumstances, but in this one, it would make sense.