For the opposing viewpoint on this issue, check out my colleague Jim Neveau’s piece.

When I think of the 2010-11 Boston Bruins club, I think of the team-first mentality that pushed them through adversity and three grueling Game 7s en route to their first Stanley Cup in 39 years. I think of the vintage Starter jacket that was passed around the locker room during the season after each win, signifying the night’s MVP. I think of the incredible story of goaltender Tim Thomas, who carried the team on his back on many occasions, and was rewarded with the Conn Smythe trophy after a shutout in Game 7 of the Stanley Cup Finals, his fourth of the playoffs.

He was the hero. He was the single, biggest reason why the Bruins were Cup champions. He could do no wrong.

Seven months later, it was Thomas who decided to not accompany his team to the White House to meet President Barack Obama due to “personal reasons,” later to be revealed as politically driven.

Twitter quickly exploded with reaction to the news. Bruins’ fanboys struggled to find acceptable excuses, while the news only gave more ammunition to enemies of the Bruins, a group that seems to be growing at an exponential rate these days.

Me, personally? I didn’t care about the news.

What Thomas did today was exercise one of the single-most important characteristics of being an American—he stood up for what he believed in. Right or wrong, left or right, Thomas chose today, a day that should have been remembered as a celebration, to make a stand based on his perception of the government. Yet here we are, as Americans, faulting him for it because it might not be in line with the same ideals that we agree with. 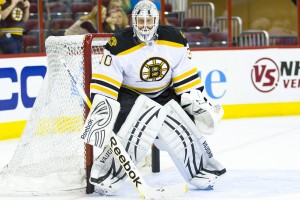 It was poor timing on Thomas’ part; I’ll give you that. Being one of two Americans on the team, he should have been there. As the starting goaltender of the Stanley Cup Champions, he definitely should have been there with his team but that’s not the debate. His choices, rather, his actions as an American citizen shouldn’t be criticized or questioned.

Sure, there are hundreds of hockey players in the league who would jump to be in the position that Thomas was in today, presenting the President of United States with a personalized jersey of the team that he won the Cup on. It’s tragic in the sense that the 2010-11 Boston Bruins encompassed what it meant to be a team, though in one instance, the individual who was most responsible for their success put himself first. However, in America, freedom of speech and choice protects that individual. Years ago, had an NHLer stood up a visit to meet former President George W. Bush, the response would be quite different than it is now. It’s a tricky double-standard.

Maybe it’s the way we view athletes. Often, we see them as one-dimensional with perceptions and opinions based on what they do on the ice or field. Maybe we’re to blame for this common misconception. We don’t want to know the political affiliations of the athletes we admire for fear of how it could taint the perception that we’ve created in our heads but sometimes, it comes out. Certain athletes like Michael Jordan were cognizant of this, and they tend to say quiet.

Thomas is an interesting situation. He’s a feel-good story. All of his life, he was told that he wouldn’t make it to the NHL. Time and time again he was shifted out of the starting goaltending role in Boston in exchange for guys like Andrew Raycroft, Hannu Toivonen and Manny Fernandez. Now, he’s a two-time Vezina Trophy winner with a Stanley Cup championship behind him. He accomplished his goals when everyone said he wouldn’t. It’s the American dream, right?

Thomas won’t be able to get this day back. There are no do-overs, try agains or second chances. Whether it’s right or not, this one moment, much like some his highlight reel saves, that will always follow Thomas around.

Ironically enough, what Tim Thomas did today was American. Though it may not seem right, it’s not something that we can judge him for.

4 thoughts on “No, Tim Thomas Should Not Be Criticized for Skipping White House Visit”