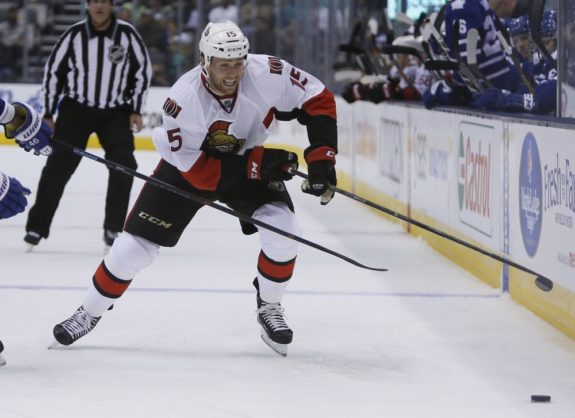 Troy Brouwer and Aleksander Barkov scored for the Panthers, and Roberto Luongo made 30 saves. Florida has lost four straight.

Balcers gave the Senators a 3-2 lead with a power-play goal with 2:35 left in the second period, redirecting a shot by Dylan DeMelo past Luongo.

Trailing 2-1, Gibbons tied the game at 2-all at 5:06 of the second. Cody Ceci passed from behind the net to Gibbons in the slot, and he beat Luongo on the glove side.

Smith put the Senators ahead 1-0 when he poked a rebound behind Luongo at 5:10 of the first.

Barkov tied the game at 1 at 9:02 of the first. Mark Pysyk took a long shot from above the right circle and Barkov deflected the puck under Nilsson’s pads.

Brouwer’s goal, a wrist shot from the lower right circle, gave the Panthers a 2-1 lead with 4:24 left in the first.

NOTES: Barkov has matched his career-high total of 28 goals. … Gibbons’ goal was his first for the Senators since being acquired from Anaheim on Feb. 25th. … Both teams were playing the second game of back-to-backs. The Senators lost 5-1 at Tampa Bay and the Panthers lost 4-3 in overtime to Carolina on Saturday. … University of Miami football coach Manny Diaz dropped the puck before the start of the game.

Senators: At the New York Islanders on Tuesday.

Panthers: At the Pittsburgh Penguins on Tuesday.