Entering the upcoming 2014-15 NHL season there remain major questions surrounding the Ottawa Senators. Two of which are the contract negotiations with important players Bobby Ryan and Marc Methot, and the current search for a team captain, a role which remains vacant after Jason Spezza was traded to the Dallas Stars this past season.

The first issue is the current contract situations of forward Bobby Ryan and defenseman Marc Methot, two players vital to the success of the Senators who are both entering the final season of their current contracts. 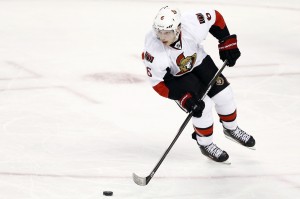 Ryan, who is seen as one of the top goal scorers in the NHL, will likely desire a raise to his previous salary and will either be looking for a long-term deal which would keep him with the Senators for the considerable future, or a short-term contract in order to prove his value to potential suitors in the free agent market in coming years. In entering the final season of a five year, $25.5 million with an annual average salary (AAV) of $5.1 million, Ryan will likely be seeking an annual term of $6 million plus on a long term contract, a commitment Senators ownership and GM Bryan Murray may not be willing to make.

“We’re not going to talk to his people until the year gets underway, I think he wants to see how important a role he can play in Ottawa, he tells me he likes it (Ottawa) and he’ll do a deal, but he wants to figure out where he’s going as far as his career and his opportunity in Ottawa.”

Murray continued, commenting on the importance of having a star player such as Bobby Ryan with the Senators long-term:

“Bobby Ryan in the goal scoring department of this league today is very hard to come by and adds a real dimension to our hockey team.”

Bryan Murray is well aware of the skills which Ryan possess and his ability to be a very productive player in the NHL, and as a result seems very willing to sign Ryan long-term. However, based on the comments of Murray, it seems this decision will be made largely by where Bobby Ryan feels he has the best opportunity to succeed with a team and as an individual. 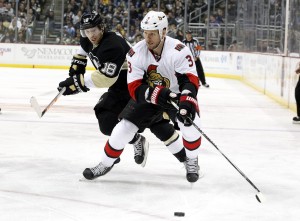 However, Murray seems to view the coming negotiations with Methot differently than those with Ryan. In the final season of a 4 year, $12 million dollar contract signed with the Columbus Blue Jackets, Methot recently posted career highs in goals with 6 and points with 23, becoming one of the most dependable defenders and a leader for the Senators this past season. As a result, Methot will likely be looking for a well deserved raise in his annual salary.

“In both cases they want to be in Ottawa, they certainly want to get paid according to the market place in their minds; our version for Marc is a little different than his.”

Yet Murray stressed the importance of keeping both Ryan and Methot as Ottawa Senators in the future:

They’re both important people, I think every player we try and keep this year is an important person.”

Methot will indeed be an important player to attempt to sign long-term in Ottawa, as his leadership was highly valued this past season, with many viewing Methot as the player who should wear the “C” for the Senators this upcoming season.

No Captain my Captain?

No captain of the Ottawa Senators looks like an increasing possibility heading towards the 2014-15 season, with no clear cut candidate to be the distinct leader of the Senators. Clarke MacArthur? Kyle Turris? Marc Methot? Dare I mention Chris Neil? Erik Karlsson seems to be the favourite to wear the “C”, but at the age of 24, concerns remain that he simply isn’t ready to be the leader of the Ottawa Senators.

The increasing view that the season will begin with no captain was emphasized this week resulting from comments from General Manager Bryan Murray.

“It’s nice to have a captain, it’s good to have a good leader, I think we have a number of them in the room, we certainly have a number of alternate captains from the previous year who are very strong and good people and we have a couple other candidates. Do we need a “C” to make them a captain? I’m not sure.”

The most important questions which remain to be answered for Murray and Senators management?

“Who is the captain, why, and what does he bring to the room that we really need? Obviously we have to make the right decision going forward but we’re not in a hurry to make that happen.”

As of now, it appears the coming season will begin with no distinct leader of the Ottawa Senators. Is a captain essential to a winning hockey team? No. Case in point, last seasons Stanley Cup Finalist New York Rangers. Yet in the Senators situation it most certainly would be beneficial, as Ottawa’s roster projects to be amongst the youngest and most youthful in the NHL, making veteran leadership important to development of young players’ responsibilities, roles and expectations, both on and off the ice.

My personal expectation? The Senators will re-sign Marc Methot the a long-term contract early in the season, consequently naming him team captain.

Will the Senators re-sign Ryan, Methot or neither?

Who should or will be the next Senators captain?