It goes without saying that hockey is an international game. Kids in different hemispheres, with different backgrounds, grow up around the familiar smells of fresh sheets of ice and wet hockey equipment (which can make skunks queasy). The NHL is hockey’s premiere level, and a glowing example of the synergy unique individuals with elite abilities have at the top of their professions. There are no prejudices against nationality, social beliefs, or race. If you can play, then you are welcome in this league, and you are respected by your peers.

There are four major professional sports leagues based out of the U.S.. In three of them the percentage of American born members is far and away the most dominant demographic. Only in the NHL is this not the case. Players born in the U.S. pales in comparison to Canada, and the European influence is immensely larger than in their three rival leagues. This makes perfect sense, as the game was created in Canada, and has assumed the role of a national pastime in the true north. Canadian kids don’t grow up wanting to be the next Tom Brady, Derek Jeter, or Steph Curry nearly as much as they envision becoming the next Wayne Gretzky, Sidney Crosby, or Connor McDavid.

The result has been a slow and steady battle for American hockey legitimacy, through players struggling to find their footing in a league that never belonged to them. There have been a few Hall of Famers, a handful of all-time greats, and a few legendary figures with American roots in the NHL. But an influx of European hockey-wizards to coincide with Canadian god-like dominance has rendered the majority of U.S. born NHL’ers as bit parts in an ensemble cast.

But for the first time in the history of this league, that is changing. The NHL still has its predominantly Canadian and European influences, but an American influence is rising. Three months remain in the season, but many are calling the NHL scoring race a wrap…. to an American born player. A top three rookie of the year candidate, four of the top ten scoring leaders, and arguably the best big-game goaltender were born in the U.S. of A. The league is changing, and the Americans are coming.

Of course, it all starts with one man at the forefront.

It’s hard to quantify what the qualifications are for being the best player in any sport. There are defensive aspects to consider, little things that do not get nearly enough praise, and tiny nuances that go into the embodiment of a professional athlete. But here’s what I do know: there is no better offensive player in the NHL than Patrick Kane this season. We judge forwards by the points they produce, and their ability to come through in pressure packed moments when their teams need them. Kane has six game winning goals, and a 16-point cushion on the player with the second most points this season. It’s his league now.

For the interest of this article, I’m going to focus on his on-ice abilities and not the other incidents he has been involved in (it’s impossible to judge the character of a man without having all the facts that the public just does not have access to). Kane has won three Stanley Cup championships, and has progressively improved each season since arriving on the NHL landscape as a teenager in 2007. Like Sidney Crosby, and Alex Ovechkin before him, Kane was the first overall pick, and billed as a franchise player for a struggling club. As the team continued to win, not surprisingly, Kane grew more confident. Though he was always viewed as an all-star and a top-level talent, he never fully entered the “best of the best” discussion.

Until last season. That’s when Patrick Kane took the league by storm for the first time, terrorizing opponents in the Blackhawks offensive zone, and building a sizeable lead in the scoring race until a broken collarbone significantly shortened his season. Kane came back, scored a bunch of goals, yelled showtime quite a bit, and led the Blackhawks to a title yet again. But the foundation was set, and the best was yet to come.

Fast forward through the most tumultuous off-season Kane or any NHL player has experienced in a long-time. Former standout linemate Brandon Saad was gone, and the Blackhawks talent was again crippled by Salary Cap issues. And that’s when it happened. That’s when Patrick Kane said “I got this” and started unleashing havoc on everyone in his team’s way. Goalie issues? We’ll score enough. Young forwards? I’ll turn my Russian linemate into the Rookie of the Year. Injuries? Again, I’ve got this.

I know he might not be your favorite player (especially if you support one of his Central Division rivals), but you have to appreciate the unprecedented level of artistry Kane is displaying. As the video below shows, we all know Patrick Kane can snipe on any goalie that the NHL has to offer:

But this video shows how he has truly taken his game to the next level: 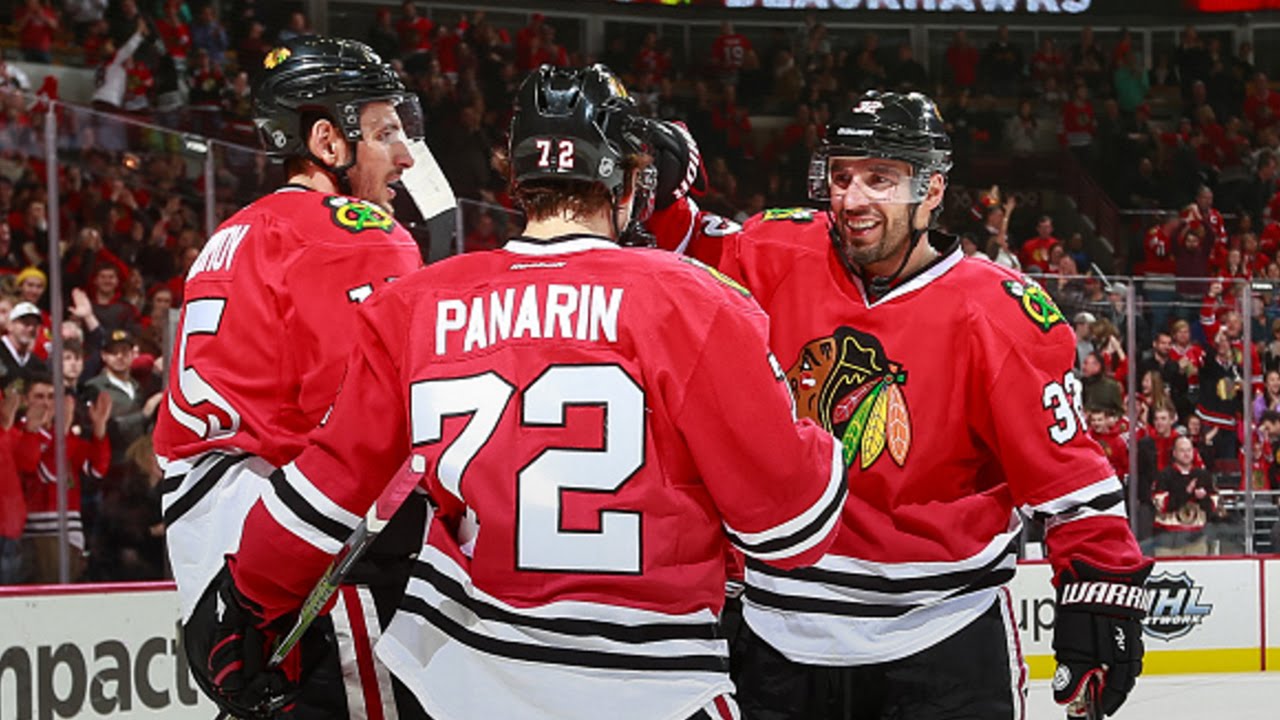 Pause the clip right at the six second mark. Kane enters the offensive zone, and the St. Louis Blues are actually defending this pretty well. Everybody is accounted for, and Kane has little room to operate. Now most forwards would just dump the puck in the corner, or rush a low angle shot and live to fight another day. But not Patrick Kane, who has both the slickest of mitts and the presence of mind to realize that teammate Artemi Panarin is in a passing lane.

Now look closer at the Blues weakside defenseman, Kevin Shattenkirk. Hesees exactly what is happening! The ultra-efficient defenseman knows what Kane is capabale of, sees that he has the angle, and yet cannot stop it in time. When Kane riffles a backhand sauce that effortlessly, it’s impossible to defend.

Then there was this clip, which made me both laugh and speechless before the play was over:

If you wanted to see poetry or symbolism in motion, here it is. The game has slowed down for #88, and he is now making a mockery of most defensive schemes that stand in his way. In 2014 Patrick Kane had firmly assumed the role of best American hockey player on the planet. Now it’s time to remove the word American from that last sentence.

Pavelski and Gaudreau Are Here to Stay

If it was one man, as mighty as Kane has been, the impact of American hockey would not be very noticeable. Pundits could use terms like “outlier” and “Buffalo is practically Canada anyway” to justify his success. But American hockey is so much more than Patrick Kane, and that is the biggest reason to be excited in the 50 states. Quick trivia question; do you know who has the most game winning goals this season? It’s not Kane, or Ovechkin, or Tyler Seguin. The answer is Joe Pavelski of the San Jose Sharks (he has eight), a man whose career bears little resemblance to Patrick Kane’s.

Pavelski was pick #205 in his draft class, and had to battle for every opportunity he’s received. The Sharks sniper has been near the top of the scoring race the previous few seasons, and his dedicated work ethic was the driving force behind the club’s decision to name him team captain. He may not stickhandle like Chicago’s blonde legend, but his effectiveness with the puck makes him nearly as dangerous. And it’s the difference between Americans like these two that has made it nearly impossible to put a label on what exactly is a “prototypical U.S. hockey player.”

If we are talking about players hard to understand, we have to stop up in Calgary for some Tim Horton’s and a game inside the Sadddledome. Johnny Gaudreau plays a similar style to Patrick Kane, and may be the only NHL player Kane can defeat in a bench press competition. But what Gaudreau lacks in size and natural skill, he makes up for in creativity. The young forward is elusive in tight spaces, and has the keen ability to make something out of nothing around the opponent’s net. They call him Johnny Hockey for a reason, but even the most loyal of his supporters have to be stunned at how quickly he has rose up the NHL ranks. Two years ago he was playing in the Frozen Four, and now Gaudreau is a top 10 NHL point producer. I’d say he’s panned out better than his football counterpart to this point.

The long-term staying power of the American hockey talent pool has always been up for debate, but a young forward in Detroit is doing his best to change that. Dylan Larkin was taken 15th overall by the Red Wings, and decided to play college hockey for a year before entering the NHL. Now, at the tender age of 19, Larkin has taken the NHL by storm with his blistering speed and scoring prowess. Oh you don’t believe me? Then take a look at this: 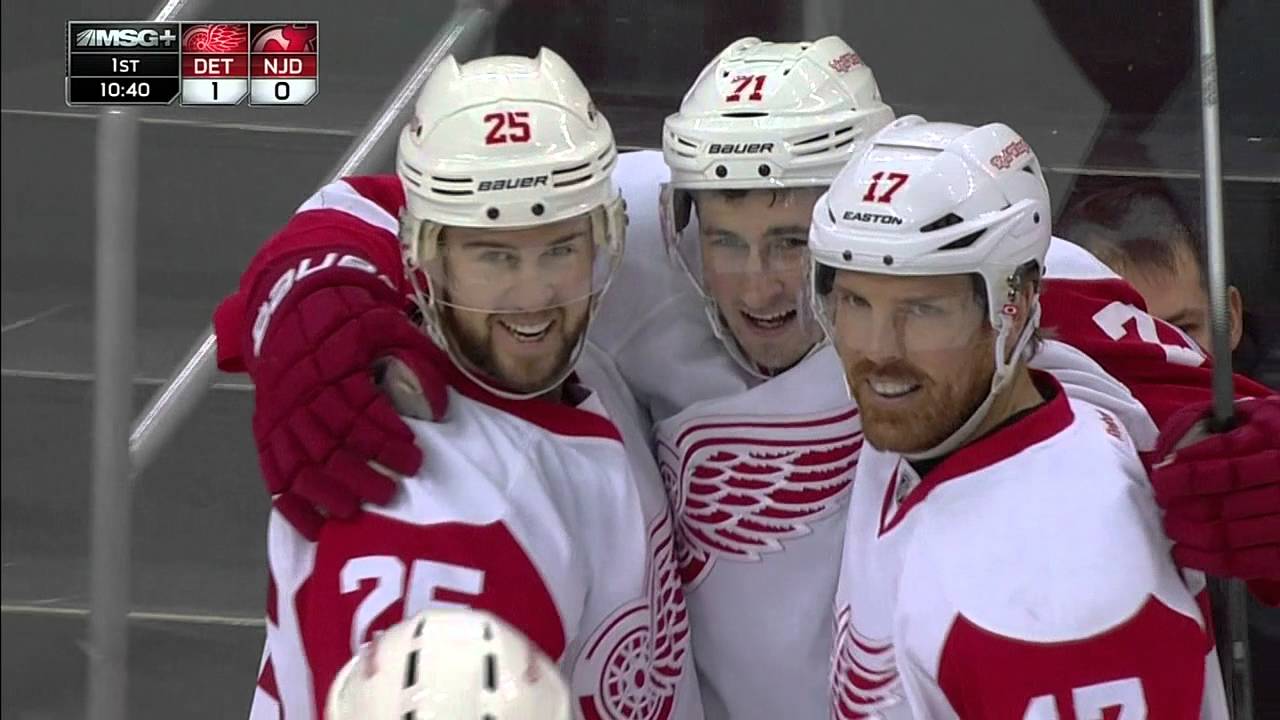 He’s got the third most points of all rookies, is a plus 24, and has fit in nicely on a team with several aging veteran legends. Oh, and if you happened to catch NHL All-Star Weekend, you may have noticed Larkin all over your television screen. First he sets the fastest skater record in the skills competition, and then he emerged as one of the best 3-on-3 players. At an all-star game. At age 19. If I hadn’t seen it for myself, I wouldn’t have believed it. Throw in Buffalo’s dynamic forward Jake Eichel (who has scored one more point on a much more in-experienced Sabres squad), and the 2015-16 rookie class has quite the 1-2 American punch.

The U.S. Hockey Pool is Deep

It’s hard to believe, but you can actually get overlooked now in being a great U.S. hockey player. Blake Wheeler is approaching a career year (top 10 in scoring), and has been churning out consistent seasons in Winnipeg since the Jets’ re-arrival. Ryan Suter, Cam Fowler, Ryan McDonagh, and Kevin Shattenkirk are just a few of the American defensemen anchoring quality NHL teams. While Jonathan Quick’s greatness continues to reach new bounds, newcomers like Ben Bishop and John Gibson have given U.S. goaltending a much-needed face-lift. And next year, in what is being dubbed as a deep rookie draft class, the top prospect is forward Auston Matthews. From Scottsdale, Arizona, United States of America.

So yeah, it’s a good time to be an American hockey fan. I still have tons of love for my international brethren, and understand that talent will always trump nationality in the NHL. But it sure is nice to root for somebody who grew up in your own backyard, isn’t it?