Before an unfortunate injury which resulted in a fractured clavicle, Patrick Kane was in the midst of turning in what was arguably the best year of his career to this point. While his numbers were pretty much in line with what we have come to expect from the flashy Buffalo native, his dominance relative to his peers had reached a new level. At the time of his injury, Kane was tied for the league lead in points with a total of 64 in 61 games. Had Kane gone on to lead the league in points and capture the Art Ross Trophy, not only would it have been the first time he had done so in his career, but it would actually be the first time any American had accomplished the feat. Unfortunately, this injury robbed the hockey world of such a possibility.

It was originally speculated that Kane’s injury would hold him out of game action for six to eight weeks. If the actual recovery period was to fall within the higher end of that spectrum, that would have dictated that he would likely be unable to return to the Blackhawks until the conference finals, and of course Kane’s absence would have made it a mountainous task for them to reach that point.

Fortunately for the Blackhawks, it appears that they have caught a break with Kane’s recovery. He has recently started to skate and take part in team practices again, and the reports coming out of such participations have been nothing but positive.

Patrick Kane just did a full windup on a one-timer. He's clearly coming back sooner than later. #Blackhawks

While obviously this is excellent news for the Blackhawks, the rest of the Western Conference will not be so thrilled to see the American star make his return so quickly. With the playoff prospects of the Los Angeles Kings looking shaky, a Kane-less Blackhawks team for the first two rounds would mean that the Western Conference would be wide open for a team like St. Louis, Minnesota, Anaheim, or Nashville to claim the conference title and allow for some new blood to represent the West in the Stanley Cup Final.

However, if the Kings sneak in and Kane is able to rejoin the Blackhawks in time for the first round, this shift in power that we could have seen this year may never happen. It would mean that a reasonably likely outcome would be a third installment of Blackhawks-Kings in the Western Conference Final with a berth in the Stanley Cup Final on the line. 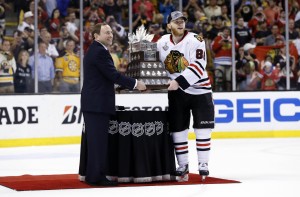 Patrick Kane is a rare player, in that his level of play in the playoffs usually is improved from his regular season performances. At the worst, he’ll match it. In the two playoff runs in which Chicago went on to capture Lord Stanley’s Cup, Kane put up a combined 47 points in 45 games. That tops captain Jonathan Toews’ mark of 43 points in 45 games. In other words, Kane has been the most consistent primary offensive weapon in the years in which the Blackhawks have had the most success possible.

The Blackhawks have maintained excellent results even without Kane. Their record since he left the lineup is a robust 12-5-1. Heading into the postseason, a hot team will be adding one of the five or so best forwards in the entire world, and one that they can rely upon to perform under the added pressure that comes in the postseason.

When he went down, many assumed that the Blackhawks would tread water without him and be a desirable draw and potential (relatively) easy in the first two rounds. But as is often the case in hockey circles, the reports of the Blackhawks’ demise have been greatly exaggerated. Nobody should want to play these Blackhawks, with or without Kane. The potential of adding him immediately when the playoffs begin makes them downright terrifying.