There’s no doubt that Pekka Rinne is a workhorse. However, is he destined to be overworked again?

That and many other questions came up over two weeks ago when General Manager David Poile spoke at the 2015 Music City Sports on May 30.

Pekka Penciled in for 65 Games

One of the points Poile made during the question and answer session was that Rinne would be called upon to shoulder the burden in between the pipes in the 2015-16 season.

That news was something that Predators were expecting and dreading. Rinne is a fantastic goalie that earned a Vezina Trophy nomination. However, there’s a concern that he’ll get overworked again as in previous seasons.

Ideally, a backup should play around 20-25 games to keep the starter fresh for any late-season push and playoff action.

This isn’t first time that people have wanted Rinne to get some rest. Our own Peter Denton broke this down near the end of the season.

With one month, 14 games, and 28 available points remaining in the regular season, now is the time for the Predators to turn their eyes to the playoffs. The Predators are already in good shape to make the playoffs and are looking at a good seed in the Western Conference. A lightened workload for Rinne will ensure that he will be healthy between the pipes for a playoff run.

Pekka Rinne is Finnish for Workhorse

The Finnish netminder was again relied on to carry the load in net for the Nashville Predators. He started 64 of the team’s 82 games. Rinne probably would’ve started more if not for a knee injury he suffered in January.

Rinne has played the lion’s share of games since he took over in 2008-09. Rinne has played at least 50 games in all but two seasons, including the 2011-12 season where he started 72 games.

The only years Rinne did not start more than 50 games were the lockout-shortened 2013 season (42) and the 2013-14season after dealing with a hip infection.

The argument for Rinne getting a reduced workload is not a new one. Fans weren’t happy with Poile’s statement.

Poile assuring the crowd that Pekka will finish the season as exhausted as always leading to back-half struggles. Thanks! :D

Backup to the Future

While Rinne is good to carry the bulk of the goaltending duties for the Predators, there’s always a concern if he goes down. That’s happened over the two seasons with the infection and the knee injury.

The man that’s taken over the last couple of seasons has been Carter Hutton, who has been criticized for not being a solid backup like a Cam Talbot or a John Gibson.

Hutton was very good in the stretch where Rinne went down in January and February with a 4-1-2 record and leads to the point that Hutton is good when given a chance to play more than the occasional spot start.

In fact, Hutton can pull off the spectacular. 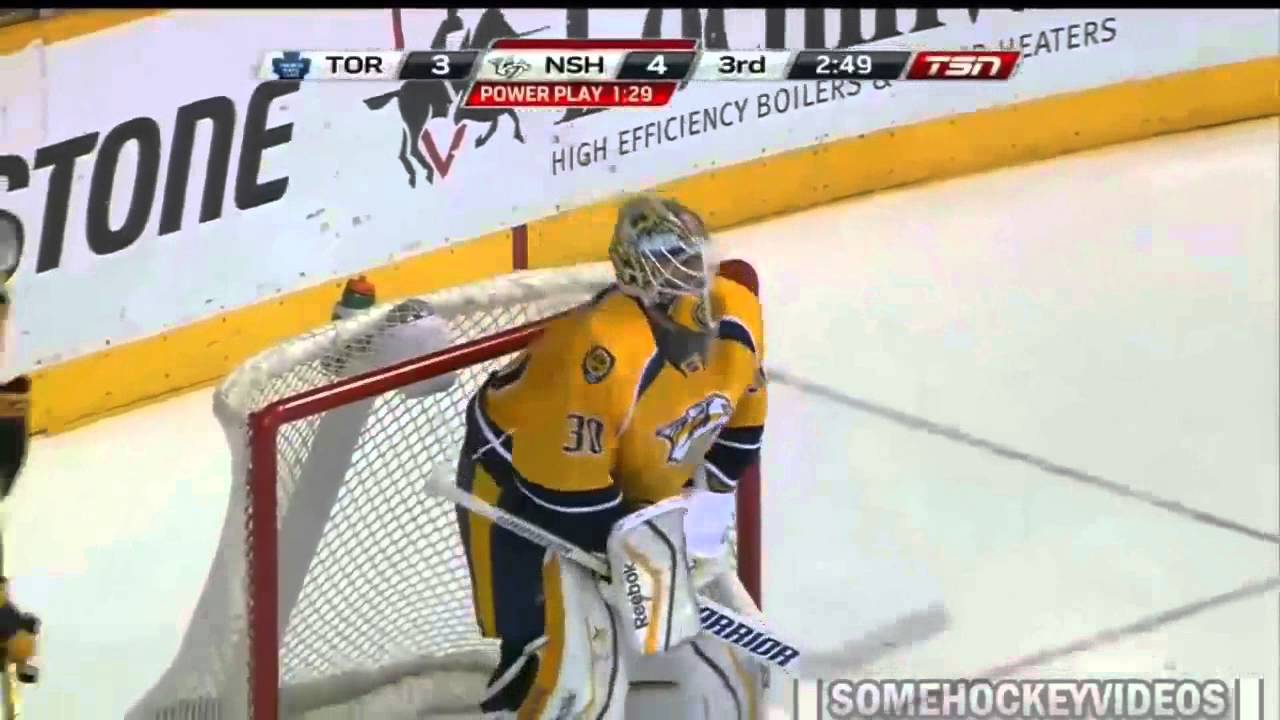 However, Nashville has a couple of prospects that could unseat Hutton and vie for the top spot when Rinne retires. Marek Mazanec is the goalie for the Milwaukee Admirals, the AHL affiliate of the Predators, and just re-signed with the organization.

The wild card in the mix is Jusse Saros, who was Rinne’s teammate at the 2015 World Championships. Saros only played once in the tournament, but he made it count with a shutout against Slovakia.

Saros is not signed to a deal with Nashville, but management is hoping to bring him to North America to refine his game. Saros may be undersized at 5’11”, but he’s very skilled.

All of these moves may spell the end of Magnus Hellberg with the Predators organization.

Most clubs would love to have a goalie like Rinne as their number one, and would probably play him just as much as Nashville is doing.

However, the Predators do need to give Rinne some rest if they have designs on wanting to make a deeper run in the playoffs.

The future isn’t now, but it will be soon.