Led by owner Mario Lemieux, the Pittsburgh Penguins alumni will take on a team of former Washington Capitals greats on Dec. 31 at 9:30 a.m. as a warmup to the Winter Classic game at Heinz Field on Jan. 1.  The rosters for both teams have been announced with many of the expected names but also a few surprises.  From the official press release:

Hall of Famers Paul Coffey, Ron Francis, Bryan Trottier and Larry Murphy will join Lemieux on the Penguins’ roster, while two alumni rookies – Gary Roberts and Billy Guerin – will add some much-needed “youth” to the team.

Eddie Johnston, Pierre Larouche and Randy Hillier will coach the Penguins, and Jack Riley – the team’s original general manager in 1967 – will serve as GM. 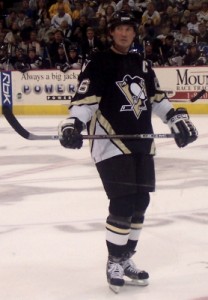 Watching Lemieux score on Beaupre one last time will be a great site to see, and reuniting Bondra and Pivonka on a line will give the Caps squad some serious firepower up front.

But Francois Leroux?  Proud owner of three goals and 577 career penalty minutes at the NHL level?

Scott Walker? He only played nine games for the Capitals last year. Huh?

More names may be announced in the coming weeks, but for now it looks like the Penguins team will be a little more familiar to the younger generation.

Tickets for the game go on sale Friday at 10 a.m. at www.ticketmaster.com and seating capacity will be 10,000.  The $25 admission will also give fans access to the Penguins’ practice following the Alumni Game.