The home stretch, or final few months of the NHL season is normally the most grueling portion of any team’s calendar. Some franchises will be battling for playoff spots while others are already planning to sell off valuable assets in preparation for offseason retooling. For the Pittsburgh Penguins, the next five weeks will mark the most important stretch of their season, both from the perspective of points in the standings and who they’ll face.

As it stands, the Penguins have a solid hold on an Eastern Conference wild card spot. While both New Jersey and Carolina are close in total points, the Penguins have three games in hand on both of them. They’re also in position to supplant the New York Islanders for the third and final Metropolitan Division spot, as the Islanders hold a three-point lead on Pittsburgh.

If the playoffs were to start today, Pittsburgh would draw a first round matchup against the Washington Capitals, who currently sit atop the NHL with a whopping 92 points. The Capitals are the fastest team to reach 44 wins in NHL history. Obviously, that isn’t a matchup the Penguins would want to start the postseason.

Thankfully, the Penguins have a lot of control over where they land within their division. But, it’s going to require a successful month vs. familiar foes that haven’t been easily solved.

The Penguins will play 16 games in 31 days next month. Originally, they were set to play 15 but their postponed matchup in Washington from a January snow storm, now scheduled for Mar. 1, has added to the already busy month. That contest has also added to the abundance of Metropolitan Division matchups the Penguins will face.

Pittsburgh will meet a divisional opponent in 12 of those 16 games. They’ll play the New York Rangers three times and the Islanders twice, both of whom are within striking distance in the standings. The rest of the schedule looks as follows, courtesy of Penguins.NHL.Com. 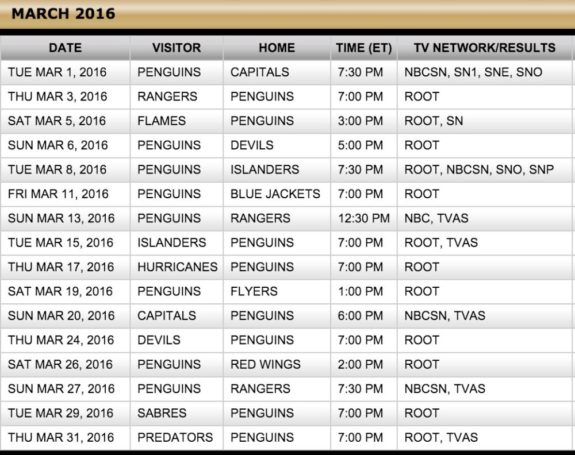 The final wild card spot will likely require somewhere in the range of 95-100 points. Ideally, the Penguins will want to escape March with 22-24 points. There are a number of favorable matchups on paper, but can the Penguins continue to exorcise their divisional demons this season?

So Far, So Good vs. Division Rivals

Last season, the Penguins finished the year with a 9-17-4 record against the Metropolitan Division. Whether or not that was a case of common opponents figuring out Mike Johnston’s tendencies is up for debate, but what isn’t up for debate is that they need to be better if they plan to make the postseason, let alone make a run past the first round.

So far this season, Pittsburgh is 7-5-2 but most importantly, they’re 6-3-1 since making a head coaching change on Dec. 12. Frustrating the Penguins and baiting them into bad penalties and poor decision-making was the recipe for success throughout Johnston’s tenure. That approach hasn’t worked on Sullivan’s Penguins, a much more resilient group.

Pittsburgh needs to find a way to solve the Rangers’ collapsing defensive approach. When the two teams met on Feb. 10, Pittsburgh controlled play and created a ton of offensive zone pressure, only to be stifled by a lack of second and third chances. The below chart from WaronIce.Com represents shot locations from that game: 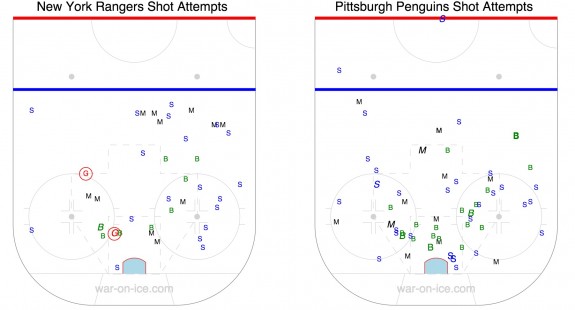 You’ll notice the multitude of chances Pittsburgh created in prime scoring areas. But, you’ll also notice the letter “B” appears often, which indicates blocked shots. If the Rangers continue to find success against the Penguins using this approach, others will copy. Plus, with three games against the Rangers and the possibility of meeting them in the playoffs, it’s imperative the Penguins figure out a way to counter.

If Pittsburgh can continue their success within the Metro over the next few weeks, they should earn themselves a comfortable spot in the postseason. I’ve never witnessed a schedule similar to this season, which pots the Penguins against so many divisional opponents this late, but I imagine it will be extremely entertaining. Oh, and nerve-racking.