What a year it has been for Sean Couturier! The 25-year-old veteran center for the Flyers has already reached career-highs in goals and points this season. With 23 assists in 49 games, he will easily eclipse his high mark of 28 set back in 2015-16.

Drafted in 2011 with the eighth pick overall, Couturier has been nothing short of excellent for the Flyers. He put up huge numbers with the Drummondville Voltigeurs in the QMJHL and was drafted by the Flyers with expectations to be their future superstar at center. This season, he has gone above and beyond the call of duty, creating for himself a household name among hockey enthusiasts and common fans alike. He has been Mr. Do It All for the Flyers this season.

Despite the offensive numbers in Junior Hockey, Couturier made his mark with the Orange and Black through his defensive play, particularly against Evgeni Malkin of the Pittsburgh Penguins. He locked down the 2012 Hart Trophy Winner in the playoffs that same year, helping the Flyers win the series in six games. He also provided a hat trick during that series, giving Flyers fans excitement on both sides of the ice. 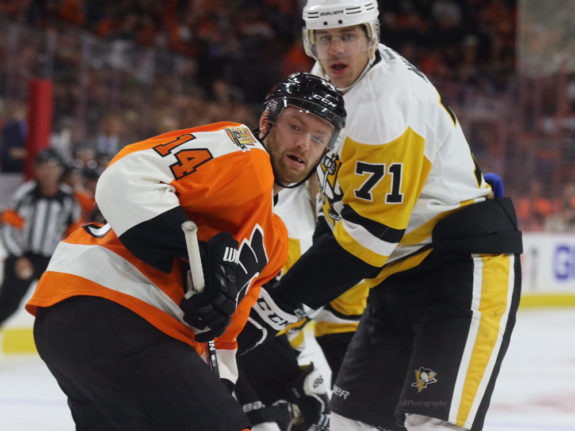 Entering the All-Star break, the man by the name of “Coots” is fifth in the league in goals scored and tied for 19th in points. He is winning faceoffs at a clip of 54.3% ranking him 16th among centers with at least 300 faceoff wins. At even strength and on the power play, he has been even better, winning faceoffs 56% of the time. His plus/minus of plus-16 is sixth-best among centers and 16th-best among all forwards.

The success offensively has come through his aggression on the ice. His Fenwick is ninth-best in the league and his Corsi is 11th-best among forwards. When he is on the ice, the team succeeds with a 12.2% Team On-Ice Shooting Percentage at even strength which is the sixth highest for forwards. All of this while logging the second highest average TOI at even strength at 21.4 minutes per game. If it is 5-on-5, expect Couturier to be out on the ice making something happen for the Flyers.

The stats speak for themselves offensively – Couturier is one of the best in the league this year. He has reached new heights in his game, going from a defensive stopper to an all-around hockey threat. This puts him in unique company and creates an argument for him as a legitimate Selke Trophy candidate.

Offense Matters with the Selke Trophy

No. 14 has been in the top 50 for the award every season, except for the 2012-13 season, with his highest finish being eighth in 2015-16. Couturier is well known for his defense even as a top line player. While the Frank J. Selke Trophy is described as “an annual award given to the forward who best excels in the defensive aspects of the game” it has been recently awarded to forwards who excel both offensively and defensively. 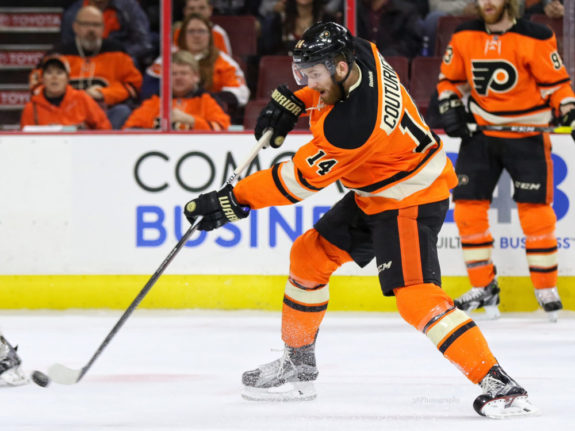 Sean Couturier has played a large role in the Flyers’ success this season. (Amy Irvin / The Hockey Writers)

The award has been given out to five different players since 2008. Pavel Datsyuk won it three times in a row from 2008-10.  Ryan Kesler won in 2011, Jonathan Toews in 2013, Anze Kopitar in 2016, and Patrice Bergeron has won it an NHL record four times in 2012, 2014, 2015 and 2017. All of these players play(ed) on the top lines for their team and had impressive offensive seasons in the years they won the award. Toews could be the exception to this trend as he only had 48 points, but he was the defensive leader for the Presidents’ Trophy/Stanley Cup winners. Otherwise, Datsyuk was fourth in points his first two years of winning. Kesler had over 40 goals his award-winning season. Bergeron played an all-around game with great plus/minus numbers his first two years of winning the award and complete domination in faceoffs. Kopitar had a career year in 2016. This year could be Couturier’s turn.

With his four awards, Bergeron is the measuring stick for Selke Trophy hopefuls. He has been an aggressive force on the ice his entire career, delivering hits as a top line player while scoring goals, winning faceoffs, and killing off opponent power plays. Couturier’s offensive numbers have opened up eyes this season, but do his defensive numbers measure up to the recent Trophy winners?

There are several factors one should look at when determining defensive success from forwards. Plus/minus, hits, faceoff wins and winning percentage, takeaways, and success on the penalty kill are just a few to be looked at. Couturier’s plus-16 is third best between him, Bergeron, Kopitar, and Toews. Several factors come into play with the plus/minus rating, so while it does hold the most weight, it is still worth noting when discussing candidates.

Couturier has been the most aggressive of the group, registering 48 hits compared to the 31 of Kopitar and Bergeron and 25 of Toews. The total takeaways are close with Bergeron leading the way at 39 and Couturier last with 32, but Couturier has the most takeaways when on the penalty kill with seven.

The areas of concern for Couturier and his chances of winning the Selke trophy come on the penalty kill and faceoff circle. While he is top-20 in faceoff percentage, his numbers don’t compare with the other three players mentioned because he does not get the same number of faceoff opportunities while playing on the same line as Claude Giroux. On the penalty kill, offense is his greatest defense as he is first in shorthanded Corsi percentage, but he is not even the top player on his team in terms of Corsi and scoring chances against. Any individual success he has had on the penalty kill has not translated to team success. Again, there are many factors that lead to a team’s success on the penalty kill, but trying to be named one of the best defensive forwards when you play on one of the worst penalty kills in the league is a tough sell.

So, while he may not be the front-runner or even the runner-up for the Selke Trophy at this point, Couturier should definitely be in the discussion. The Flyers are in playoff position at the All-Star break, itching to make it back to the postseason. Couturier has put the Flyers in this position and will have to continue his success on both ends of the ice in order for the Orange and Black to succeed. 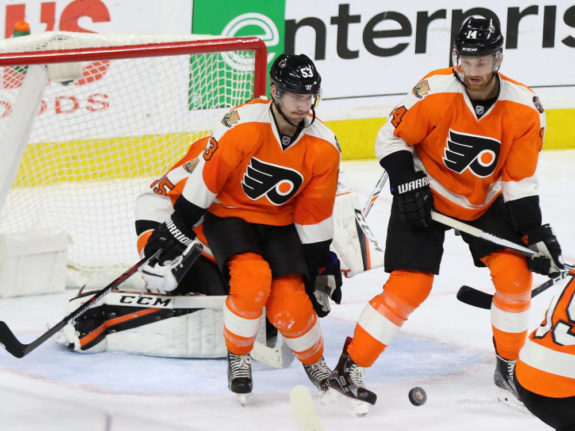 This means that consistency will be key for the center. He has been consistent all year long and will simply have to continue in order for him and his team to be successful. The Flyers play 27 of their remaining 33 games against Eastern Conference teams, and Coots has had most of his success against Metropolitan and Atlantic Division teams. Sitting only four goals behind Alex Ovechkin, he has set himself up to potentially steal the Maurice Richard Trophy from the best goal scorer four of the last five years.

The team’s penalty kill will have to improve which means their forward will have to improve, too. His individual defensive numbers should increase, but will they be competitive enough to argue a Selke Trophy? Even if they aren’t, if Couturier can lead the league in goals and be the reason why the Flyers go from a bubble playoff team to a dominant force in the postseason, then a Hart Trophy could certainly be coming his way.

Call it wishful thinking if you want. Call it a long-shot, too, but Sean Couturier has taken over the title of MVP of the Flyers this season from Claude Giroux. At 25 years old, he is the next big star of the NHL and franchise player for the Flyers. If the NHL has not taken notice of No. 14 yet, this breakout season of his will certainly put him in the spotlight. Even if it isn’t with an award, Couturier deserves recognition for his play.