On August 28, the Philadelphia Flyers announced that Eric Lindros’ number 88 will be retired. Over the course of his career, Lindros was a threat in every aspect of the game. He could shoot, pass and, most of all, he could hit. His career was cut short because of a series of severe concussions, that were mainly the result of Scott Stevens’ thunderous hit during the 1999-00 Stanley Cup playoffs.

Head trauma ultimately forced “The Big E” to end his NHL career, having played less than 800 games, but the impact he had on the Flyers and in international play was not overlooked.

Lindros was originally selected first overall by the Sault Ste. Marie Greyhounds in 1989. He refused to sign with the team, but Phil Esposito, the Greyhounds’ owner at the time, had already drafted him. Lindros was eventually traded to the Oshawa Generals, where he played 128 games (regular season and playoffs) and tallied 290 points and 473 penalty minutes. He helped lead Oshawa to a Memorial Cup title in 1990, the franchise’s fourth.

In the seasons he played for the Generals, Lindros demonstrated the characteristics that would make him the first overall pick in 1991. He was a ferocious competitor, hard on the puck, could punish opposing players with his massive frame and certainly had no trouble finding the back of the net (133 goals in 128 games). He also represented Canada twice at the world juniors and once at the Canada Cup.

As we all know, Lindros refused to play for the Nordiques despite warning owner Marcel Aubut before the draft that he would never play for the franchise. Aubut drafted him anyway and Lindros did not play the entire NHL season. Instead, he went back to the Generals and also helped Canada win a silver medal at the Olympics later on in the season.

Wayne Gretzky shared a story from the 1991 Canada Cup about Lindros and the Nordiques in his book Stories of the Game. The tournament took place only a few months after Lindros refused to play for Quebec.

We played our final game of the round robin against the U.S.S.R. in Quebec City. Keenan told me that Eric would be my roommate while we were there. No offense to Eric, but he was the last guy I wanted to hang out with in that particular city.

Gretzky continued to say it wasn’t about the French culture or the team itself. At the time, the Nordiques had a great roster highlighted by players like Joe Sakic, Mats Sundin and Owen Nolan. Lindros was more concerned about the exchange rates and taxes, according to Gretzky.

I could see both sides of the argument. But I was also aware that Eric was getting bomb threats and that people were threatening to shoot him – and now Mike wanted me to share a room with him. I did not relish the prospect. I mean, I don’t even like driving fast.

This showed the hatred that fans had for Lindros. His decision gave him a bad name around the league, especially in Quebec. Team Canada won the Canada Cup over the United-States in a best-of-three series. Lindros had five points in eight games.

The Biggest Trade in NHL History

At the 1992 NHL Entry Draft, a number of meetings with other teams led to Lindros’ rights being traded twice, first to the Philadelphia Flyers and then to the New York Rangers. The trade was eventually settled by an arbitrator and the Flyers acquired Lindros in exchange for Ron Hextall, Steve Duschene, Peter Forsberg, Chris Simon, Mike Ricci, Kerry Huffman, two draft picks and an additional $15 million.

The trade is still considered one of the biggest in NHL history. It marked a new era for the Flyers, but it was also a game changer for the Nordiques (who were then relocated to Colorado).

In Lindros, the Flyers had a generational player who could immediately turn them into a contender. He was already tearing up the juniors and his menacing size was something that every team needed up front. Lindros was already being mentioned in the same breath as legends Wayne Gretzky and Mario Lemieux. 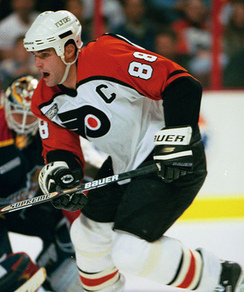 Lindros played 13 NHL seasons, battling injuries in almost every one. He had problems with concussions throughout his career and the long-term effects were not as documented at that time as they are in the NHL today, which might have cost Lindros his career.

During his time in Philadelphia, “The Big E” played a total of 486 games and racked up 659 points. Lindros’ 1.36 points per game average are still a franchise record and his point totals rank fifth in Flyers history. He failed to win a Stanley Cup with the storied franchise but still led the team to the playoffs in five seasons.

In 2001, he was traded to the New York Rangers for Jan Hlavac, Kim Johnsson, Pavel Brendl and a third round pick in 2003. Lindros tallied 158 points in three seasons with the Rangers, failing to make the playoffs in each one.

Lindros’ injury setbacks ultimately cost him a shot at being one of the greatest players to ever lace up skates. His combination of skill and strength are unmatched even today and it’s a shame concussions took such a toll on him. In June 2016, Lindros was inducted into the Hall of Fame along with coach Pat Quinn, goaltender Rogie Vachon, and winger Sergei Makarov.

On January 18, he will see his number hang majestically from the rafters of the Wells Fargo Center along with Flyers greats Bobby Clarke, Barry Ashbee, Bernie Parent, Bill Barber and Mark Howe.

Feeling very honoured, privileged and lucky. Thank you @NHLFlyers and to you all for your kind mssgs. Looking forward to Philly in Jan!

Former intern at The Hockey News. Young, passionate hockey writer with a wealth of hockey knowledge. Journalism graduate. Always following the current hockey news in the NHL and CHL. Primarily write about the Philadelphia Flyers.