Climbing up the wild card standings is priority number one for the Philadelphia Flyers. They still have to reach the final rung to make it in. 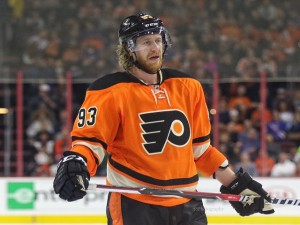 The Philadelphia Flyers are reaching for the important goal that every NHL team aspires to achieve: a chance to win the Stanley Cup. The coveted trophy hasn’t been in the team’s possession since the 1974-1975 season and it would be a wonderful sight to add another banner to the ceiling of the Wells Fargo Center. The Flyers have been working all season to boost their standings in both their division and within their conference. Their recent six-game homestand has been a success for the team, ending with a 5-1 record. There was no question that the team needed to earn every point they could get during the period.  According to the Philadelphia Flyers website, Flyers right winger Jakub Voracek spoke about the importance of the series for the team.

[quote_left author=”Philadelphia Flyers.com”]We’ve got to make at least 10 points out of these next six games… This is going to define if we’re going to make the playoffs or not; this home stand.”[/quote_left]

Voracek was right in his prediction and it was true with the team’s five wins. Their most recent one against the Tampa Bay Lightning on Monday night was a significant outing. They won 4-2 and increased their chances of making the postseason. There are 17 games left and the Flyers aren’t going to win all 17 games, which would be ideal in a perfect world. However, the team has been riding their entry into mid- March on a good note.

It also comes as no surprise that the Flyers have been playing some of their best hockey all season over the course of the past few games. It wasn’t the case four weeks ago when the team was barely making a case for being a playoff contender. Now they sit three points back of a playoff position, poised to take on the contending Detroit Red Wings.

Get the latest on the wildcard race→ https://t.co/lmk3JOpZO2

They have a chance to make up ground with a win and it seems that there might just be enough power behind the team to do so. The Flyers have gone 8-2-2 in their last 12 games and it has been an impressive one. They had a home-and-home sweep of the Lightning and have made both the Red Wings and Pittsburgh Penguins sweat. It might not be how well they play at even strength that is keeping the Flyers afloat.

It was the superb goaltending of Steve Mason and Michal Neuvirth that was keeping the team in the race. Yet there is more to it than that. Since February, the Flyers 5-on-5 Corsi rating has gone up to 55.3 percent. The rising number has been seen by their strides in the offensive zone. They’ve been playing brilliantly. They’re blocked shot rating is up and they’ve created turnovers that have led to scoring possibilities.

There are 15 games left for the Flyers to clinch a playoff position. Five of those games are against the Red Wings and Penguins, which are going to be must wins. There are more back-to-back games during the rest of the season and it will be a test of strength for the Flyers. The supporting cast of players have been backing up the strength of the rest of the ream. Flyers’ winger Ryan White is one of many who have been contributing to the team’s success. While the Flyers aren’t going to have the strong caliber of players like the Los Angeles Kings or the St. Louis Blues, their playing strength is something to look at going forward. They have addressed their weaknesses and have improved in all three areas of the ice. They’re working with less than an ideal roster but they can make it easily into the postseason with a good focus.