PHILADELPHIA — James van Riemsdyk recorded a hat trick, and Nolan Patrick had two goals and an assist to lead the Philadelphia Flyers to a 7-4 victory over the Minnesota Wild on Monday night.

Wayne Simmonds also had two goals for the Flyers. It was just the second win in the last 11 games for Philadelphia, which began Monday with the fewest points in the league. 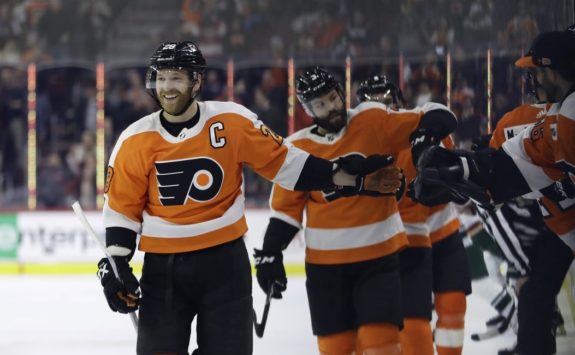 Philadelphia outscored the Wild 3-1 in a busy second period.

Foligno struck first, following his own miss from right in front of Carter Hart, to give Minnesota a 3-2 lead.

Patrick entered without a goal in 24 straight games before the first of his two scores tied it at 3. Then he made it 4-3 with 4:32 remaining with a highlight-worthy play. Travis Sanheim took the initial slapper from the point, and Patrick moved his stick between his own legs and shot behind his back after the rebound caromed hard off the back boards for his seventh of the season.

Simmonds lifted a shot over Devan Dubnyk with 5.2 seconds left. Coach Bruce Boudreau pulled Dubnyk after the second, replacing him with Alex Stalock.

A fluky goal with 11:42 left in the third pulled the Wild within 5-4. An attempted clearance from in front of Hart bounced off Suter and back into the goal. It was waved off at first, but the officials reversed their initial decision after a video replay showed that Eric Staal was pushed into Hart by defenceman Robert Hagg.

Simmonds answered with his second of the game 2:25 later on a breakaway.

Van Riemsdyk’s first tally, a power-play goal with 7:56 left in the first period, turned the tide. Philadelphia’s power play came in ranked 30th, connecting at just 12.8 per cent, and interim coach Scott Gordon made major changes by installing five forwards onto the top unit. It paid off when van Riemsdyk deflected Jakub Voracek’s slap shot to pull the Flyers within 2-1. The goal was upheld after a video challenge by Minnesota.